The PlayStation 5 has now been officially launched in the majority of the world and, although the reception has been mostly positive, there is one feature about the device that has drawn early criticism, namely the storage. Despite the fact that the PS5 arrives with one of the fastest internal storage systems in the world, commercially at least, the storage available appears somewhat limited with 825GB in the base model and once the system software is installed, around 665GB left to play with. To counter this, Sony provided users with the hardware upgradeability on the PS5 install M2 NVMe SSD upto 22110 in length and this allows users to buy off-the-shelf SSD from brands like Seagate, WD and Samsung to increase the base level storage. So, what is the problem? Well, at launch, Sony has temporarily disabled this upgrade feature to the negative cries of many.

If you are looking for the perfect Heatsink for your PS5 SSD, use my Guide here to PS5 Compatible SSD Heatsinks HERE. Or I have listed the Best M.2 NVMe SSDs for your PS5 Storage upgrade Below:

The hardware upgrades slot is STILL physically available and you can install NVMe SSD drives inside, but the ability to use this expansion slot is disabled in the software at the moment. however, many users including myself, want to know what happens right now if you install an SSD inside the system? Will it see the SSD and/or can you interact with it in the current version of PlayStation firmware at all? So, I went ahead and installed an SSD inside the system to see what will happen and the results are below. 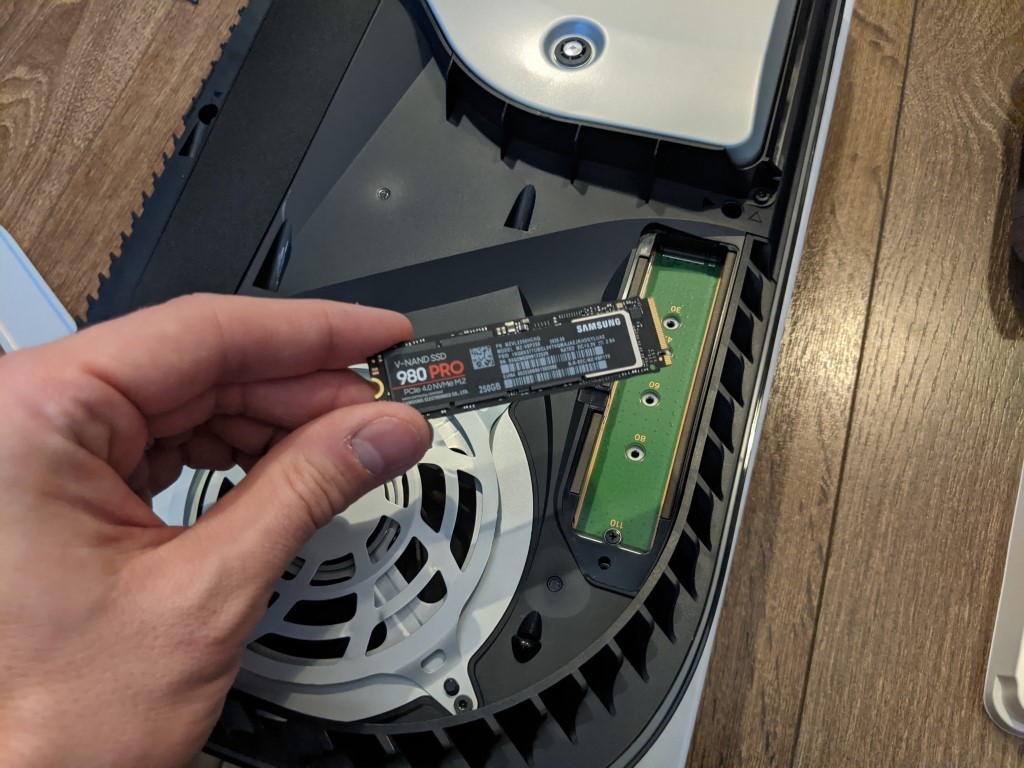 The NVMe SSD installation took place on a completely uninitialised PlayStation 5, as I did not want the latest firmware update affecting any potential results in this installation. I unboxed the system and prepared the console for drive installation. The installation of the NVMe was pretty straightforward and only required a Phillips head screwdriver and around 5-minutes. 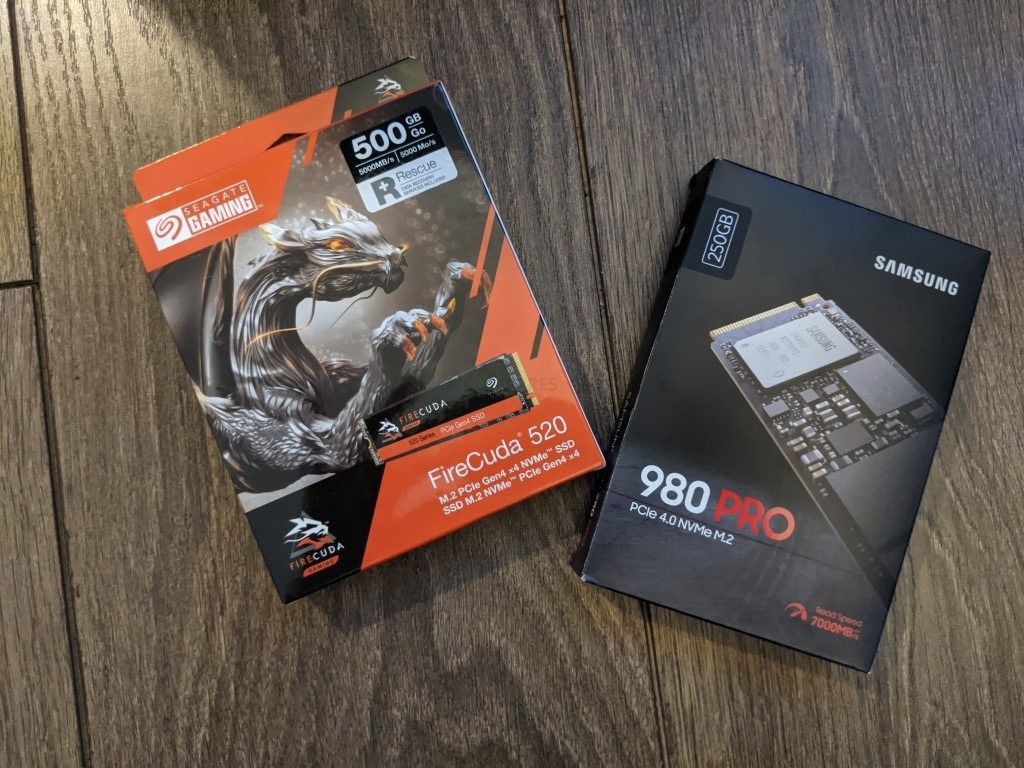 The drives I wanted to test were Seagate ironwolf 520 and Samsung 980 Pro, both NVMe PCIe Gen4 X4 drives that promise between 5,000-7,000 MB/s. This is still lower than the potential maximum performance of the PlayStation 5 internal storage(9,000MB/s+) and likely the disparity between current NVMe controllers and the core Playstation system is likely the reason for this upgrade option currently being disabled in the software. Until the likes of the Phison E18 PCIe 4 SSD controller being mass-produced or WD/Samsung getting there alternative out there, this will significantly slow down drive testing by Sony. Nevertheless, these two drives are two of the fastest NVMe available in the world right now and ideal for testing in the base PS5 right now. 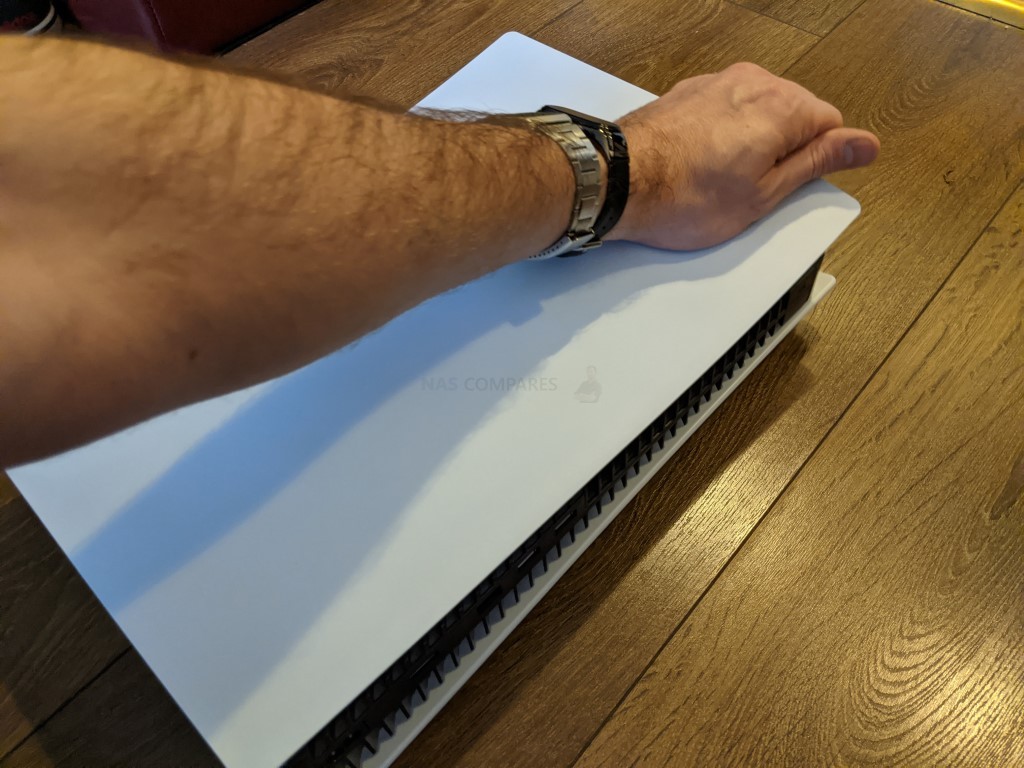 Removing the lid of the PS5 is incredibly straight-forward and does not require tools. most first-time users may be quite hesitant to mess around with this plastic plate for fear of breaking or damaging them, but the removing of the plate (the side that does not have the PlayStation logo, but rather the side with the optical disc input if you purchased that version) is incredibly straight-forward.

First, you need to slightly lift the top right corner as shown in the images below, then you need to slide the plate down and it comes off exceptionally easily, revealing the internal cooling fan and that small metal module where we install NVMe SSDs. 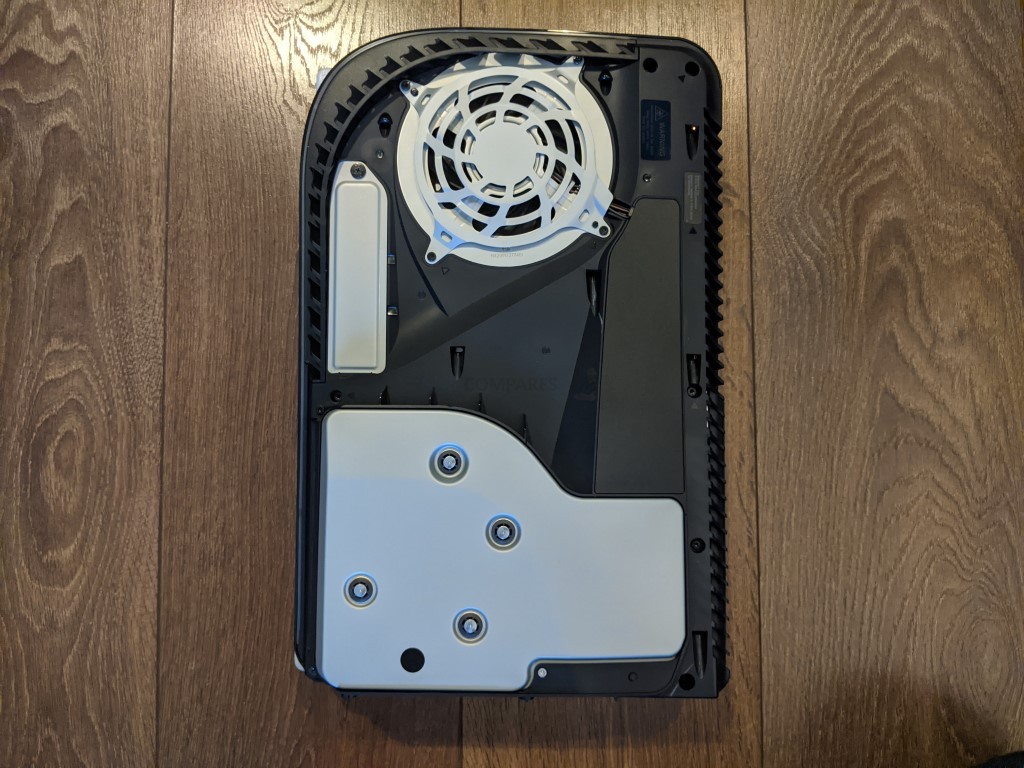 Next, you will need a small cross screwdriver to remove the single screw that keeps this expansion port cover in place. Remember, lefty loosey, righty tighty! 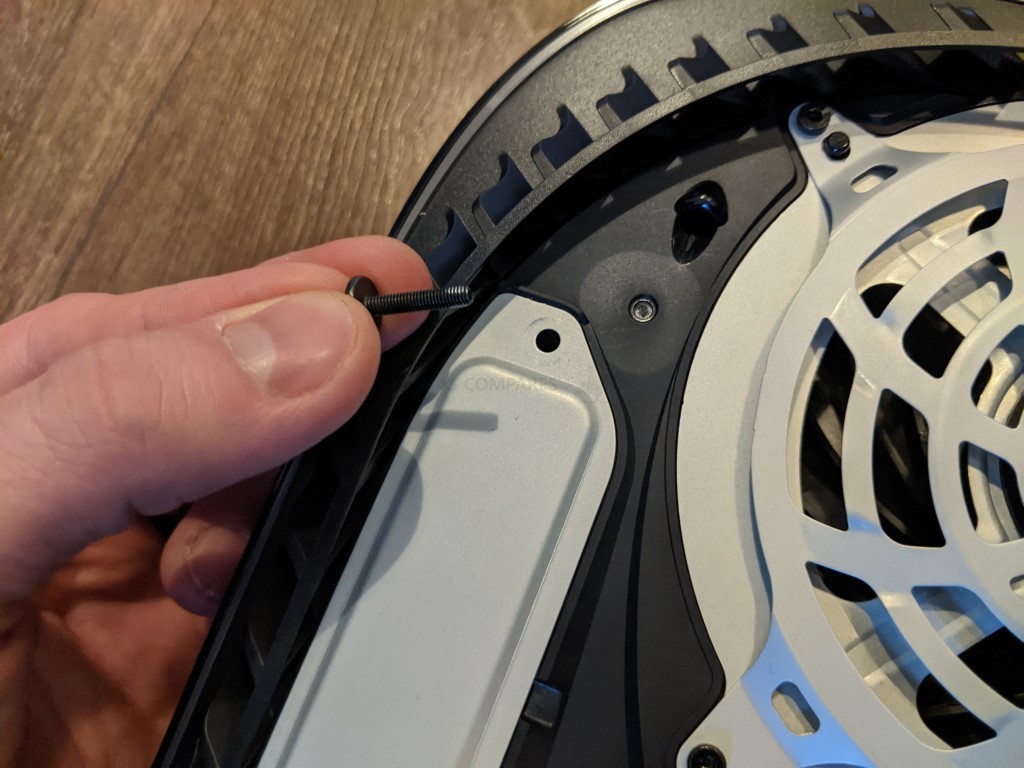 Upon removing this plate, you will see the full-length NVMe SSD m 2 bay. 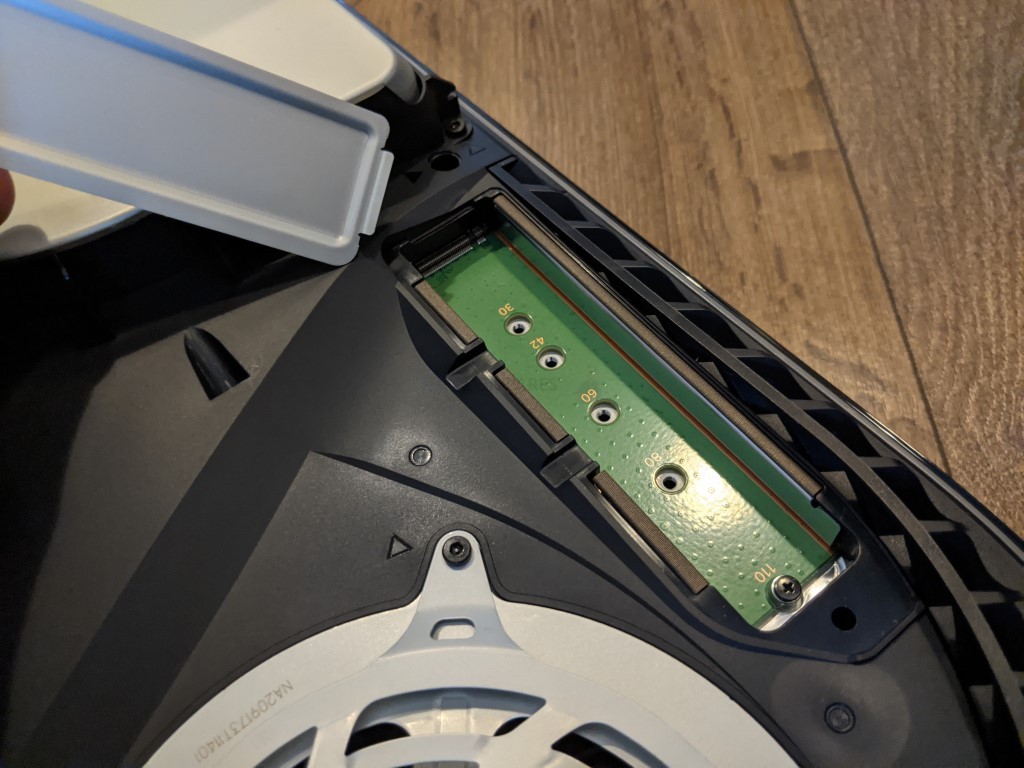 Mixed install the NVMe in the available bay. Don’t worry about getting it the wrong way round, just be gentle and the notched groove in the SSD media drive can only go in one way. 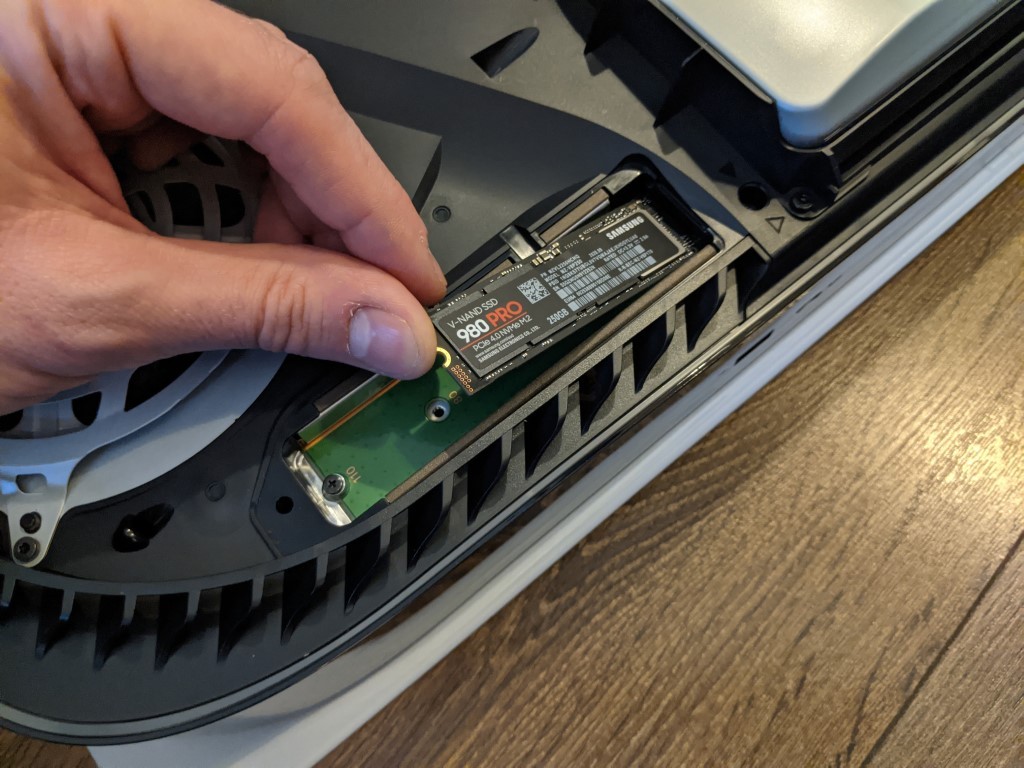 Once the drive is slotted inside, remove the screw at the top end of the NVMe day, as this is the holding bracket for the in NVMe M.2 Drive 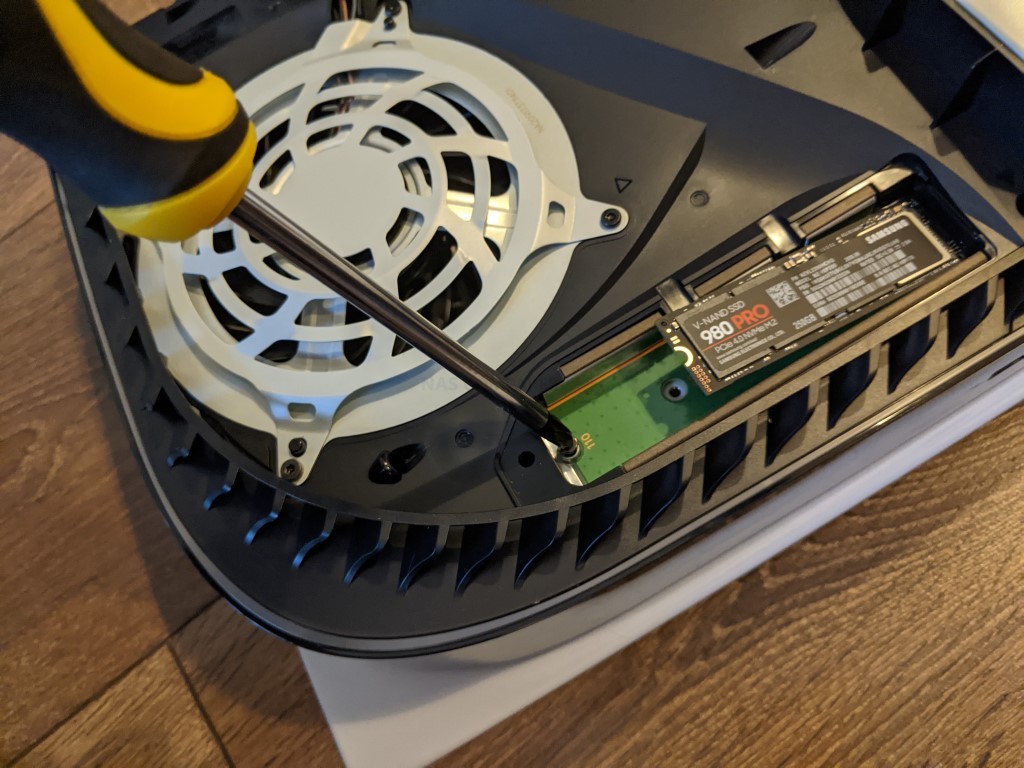 Ensure that the circular silver metal bolt is in the correct circle groove of the controller board, then place the NVMe flat, thin screw the top of the bracket to secure the NVMe in place. 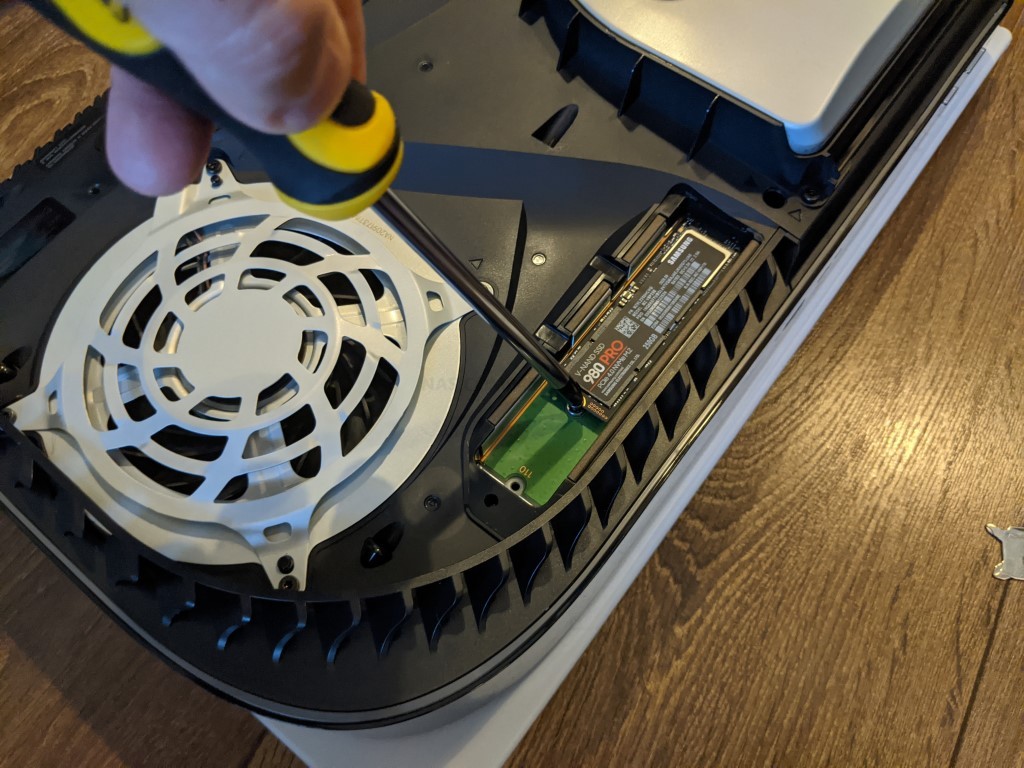 Now you need to replace the metal into covering and reinsert the screw to secure it in place.

Now I reconnect the base stand, ethernet cable and power connector for the PS5. Then simply boot the device with the power button, insuring I have already synced the controller or have it connected via USB. 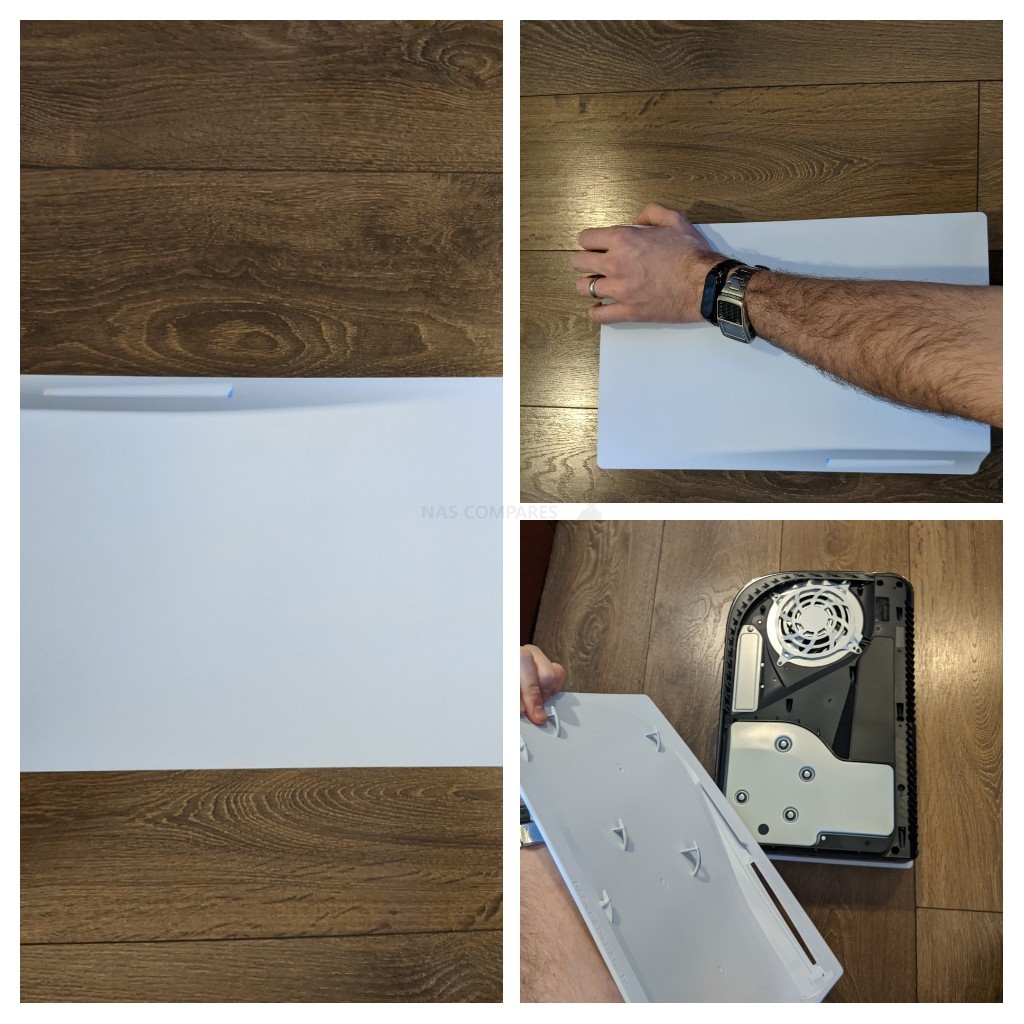 As we can see, this is the limit to which you can currently utilise an NVMe on the PS5, as they have ensured that the system will not boot with this media expansion by populated with an SSD.

From here the system simply requests that you shut the unit down and remove the pre-installed NVMe eBay SSD. I have since tried this installation with the system fully initialised, sadly the system still continues to refuse access to the PS5 GUI with the expansion slot/bay populated.

As mentioned, the current range of SSDs commercially available are just not fast enough right now and although it would be easy for Sony to enable this expansion bay in PS5 and allow users to install games on the NVMe, this would become a problem down the line for many users as game developers managed to harness that top-end speed of the PS5. Many users could likely rush out and buy in NVMe SSD on day one of their PS5 purchase, but later on find out that their SSD is not fast enough for the system to operate the games optimally, which would be especially galling on multiplayer games. Therefore, because the newer and faster range of PCIe Gen 4 NVMes are on the horizon with improved controllers, as well as improved NAND (the storage component that holds the data on the SSD) and drive length options on the way, Sony has taken the arguably mature decision to disable this feature and allow the SSD market to release more suitable drives. Some might argue that it’s them at a disadvantage to it’s biggest rival, the XBOX Series X/S (which has a larger initial storage and expansion drives at launch). However, it is worth noting that the maximum performance speed of the XBox X/S is noticeably lower than the PS5 in terms of storage (maxing at around 4,800GB) this console generation is going to be HEAVILY influenced by media storage to push larger and faster graphics through their hardware. Additionally, the expansion storage from XBox is not as widely supported as the PS5, favouring a proprietary SSD in a cartridge-based upgrade. Ultimately, we won’t really know the importance and effect of this high-end media vs availability at launch till a good year or so into the system’s lifespan.


When Will Sony Enabled the PS5 SSD Expansion Bay?

That is hard to say right now, as as the main SSD manufacturers in the market right now, Samsung, WD and Seagate, are all hard at work developing their hardware amidst the effects of the current local pandemic and restricted working practices have taken their toll on R&D, resulting in a delay in release. Originally, the NVMe SSD that would function in this system should have been released ideally in the Autumn, but unfortunately, it is looking increasingly likely that this top-tier SSD will not land until the start of next year and likely this feature will not be fully enabled until then. That said, if delays continue, there is every possibility that a middle ground will be reached by Sony on these NVMe SSD, but don’t be surprised if this is still only a halfway activation of the NVMe storage bay. As soon as this feature is enabled, rest assured that I shall be testing a wide range of NVMes on the PS5 and letting you guys know which drives will work the best as well as comparing performance between the internal and external system in a range of games in 2021. For now though, we just have to sit and wait.

DISCUSS with others your opinion about this subject.
ASK questions to NAS community
SHARE more details what you have found on this subject
CONTRIBUTE with your own article or review. Cick HERE
IMPROVE this niche ecosystem, let us know what to change/fix on this site

Help me to not have buyer's remorse - To Buy to Not to Buy in 2022?
Dbrand & Heatsink Combo: System Impact?
Specifications for 2nd NAS for offsite storage use (backup)?
Issue migrating Plex Media Server folder from existing Qnap NAS to new Qnap NAS?
Ripping CD/Flak file directly to QNap TS453D possible ??