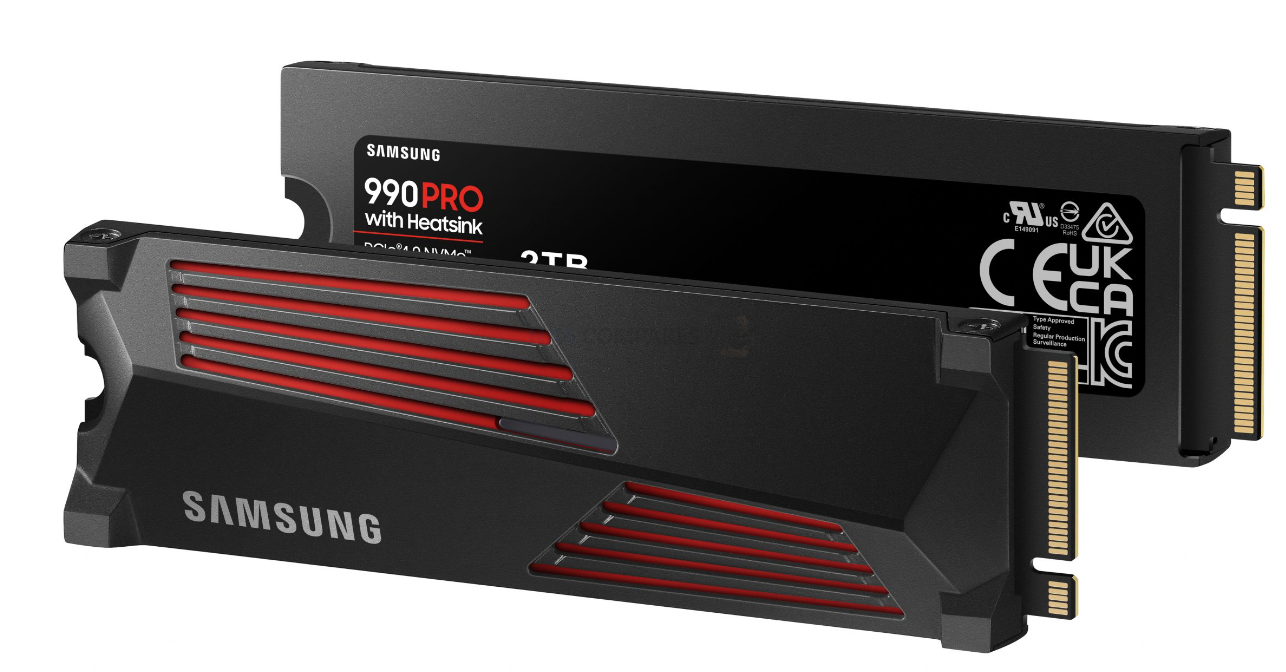 For those that have been closely following the world of SSDs in summer 2022, one of the most intriguing leaks of a future product was undoubtedly the reveal on the PCI-SIG pages of a SAMSUNG 990 Pro that was reported to be a PCIe Gen 5 SSD. However, just a week later and now Samsung has put us out of our misery with the official reveal and launch of this new PCIe Gen 4.0 SSD! Now before you say “but wait, the Samsung 980 Pro is PCIe 4 – why should I care about the Samsung 990 Pro?”, it is worth highlighting that this new drive is designed to bolster the existing PCIe4 product family from Samsung and (much like the WD Black SN850X released in July 2022 – Review here) is an upgraded and far superior alternative for 2022, delivering improved speeds and increased power efficiency,  optimized for graphically demanding games and other intensive tasks including 3D rendering, 4K video editing and data analysis. The new Samsung 990 Pro also seemingly benefits from the latest V-NAND and a new proprietary controller, the 990 PRO series offers the highest speed currently available from the PCIe 4.0 interface. The SSD delivers sequential read and write speeds of up to 7,450MB/s and 6,900MB/s, respectively, while 4K random read and write IOPS come in at up to 1.4 Million and 1.5 Million respectively. The result is a 55% improvement in random performance over the 2020 released Samsung 980 PRO (depending on your hardware/storage setup). Samsung claims that the new 990 PRO is particularly well-suited for heavy gaming as well as creative and productivity tasks. Let’s discuss everything we know about this new SSD.

The full hardware specifications that Samsung have provided on the new 990 Pro give you the solid specs, whilst unsurprisingly keeping a little quieter on the proprietary stuff (such as that in-house controller and V-NAND depth/layer count). However, they do highlight that the Samsung 990 Pro will arrive with a new NVMe Controller, as well as running on NVMe 2.0 architecture.  Samsung’s newly designed controller dramatically improves the SSD’s power efficiency by up to 50% compared to the 980 PRO. Alongside this the Samsung 990 PRO employs a nickel coating on the controller and a heat spreader label on the drive for reliable thermal management, something we have seen brands such as Sabrent Rocket 4 Plus and the Viper VP4300 from Patriot employ to great temperature dissipating success. Samsung’s Dynamic Thermal Guard technology further ensures that the drive’s temperature stays in the optimal range. 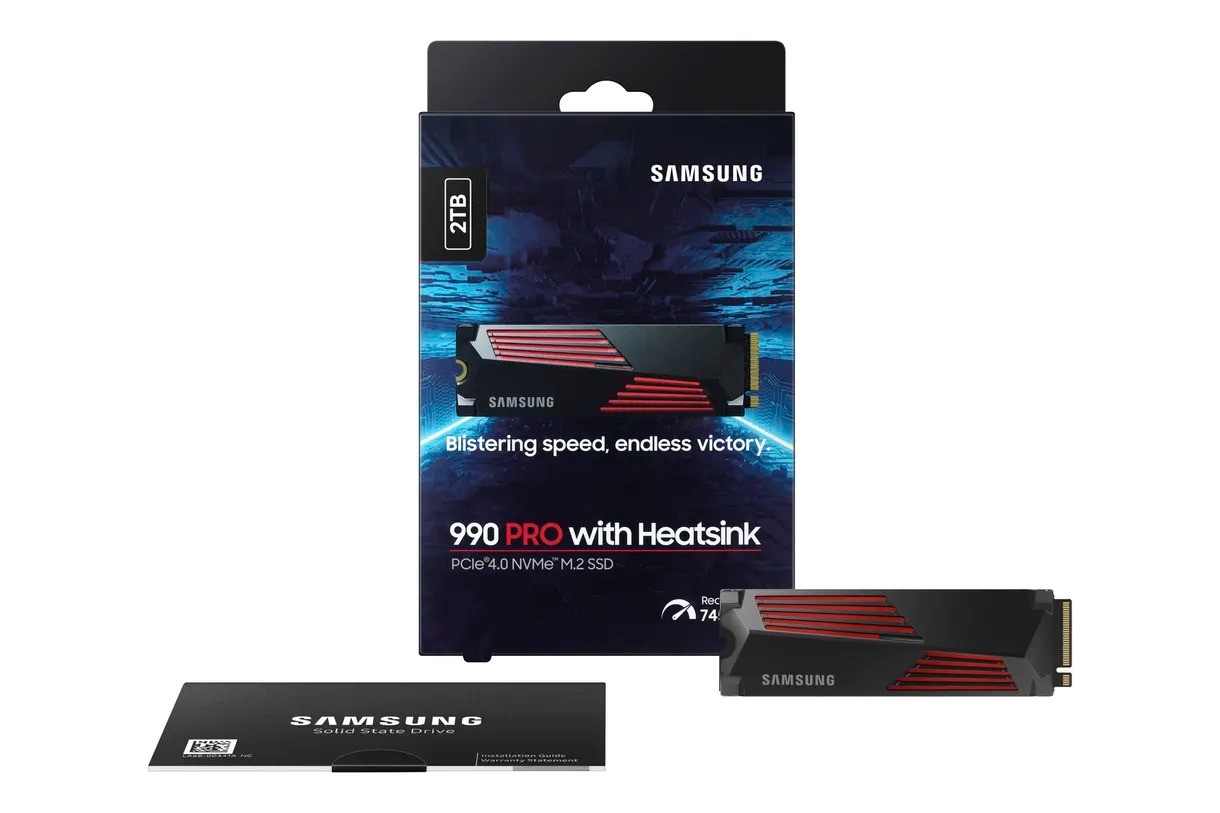 The Samsung 990 PRO also arrives in a newly designed Heatsink option, that offers an additional layer of thermal control while its RGB lights add more style to the drive. Samsung’s 990 PRO is also an excellent solution for laptop and desktop upgrades as well as for build-your-own PCs, providing a significant performance boost while using less power for increased battery life and thermal management. Right now, the main questions on people’s lips (well – those more versed in SSD tech at least) are:

And right now, Samsung is being their usual incredibly tight lip self! But below is what we know:

Interestingly, the new and improved Samsung 990 Pro still maintains the same durability rating as its predecessor the 980 Pro. Now, although a decent amount of the peak 7,450/6900MB/s seq performance and 1.4/1.5M IOPS comes from that new secret SSD controller architecture, there must be improvements in the V-NAND too, so the continued 0.3DWPD rating might have been an area where improvements could have been made, especially when Seagate’s one-year-old Firecuda 530 more than doubles that durability at 0.7DWPD and is comparable in performance. We CAN make assumptions on that V-NAND though. Around a week ago, there were reports from Samsung that they were expected to release a 236-layer NAND flash product within this year. In addition, it is planning to open a new R&D center this month and the center will be in charge of developing more advanced NAND flash products. Memory chip makers are competing to increase their layer counts. SK Hynix recently completed the development of a 238-layer product and Micron Technology announced that it developed the world’s first 232-layer NAND flash product. Samsung Electronics’ share in the market is 35 percent, the highest in it. Samsung Electronics’ current layer count record is 176. The company is about to increase it by 60 with its production know-how and competitiveness in price and performance. Perhaps these improvements in V-NAND layer count are were we see these further improvements.

Why Didn’t Samsung Release a PCIe 5.0 x4 SSD Instead?

It’s a very good question! When the early erroneous leaks appeared a little over 10 days ago via PCI-SIG that this drive was being listed as a PCIe Gen 5 SSD, It made ALOT of sense. Aside from the SSD industry starting to move into the area of commercial PCIe5 SSDs towards the end of 2022, it made sense for Samsung to try to get ahead of everyone else in this new SSD generation after arriving around a year into the PCIe4 generation, a tad sandwiched between a flurry of their competitor’s products. Perhaps Samsung does not have a PCIe 5 Generation Controller ready (outside of enterprise flash developments) leaving that big 3rd party SSD Controller giant Phison with their E26 Controller to start making waves (with several examples from Kingston, Corsair and Gigabyte revealed at everything from CES 2022 to Computex in H1 2022). Right now, if you are looking for a PCIe 5 SSD from Samsung, then the best and closest drive coming is the Samsung PM1743, which is reported to be capable of 14GB/s Sequential read and 2,500K 4K random read IOPS. 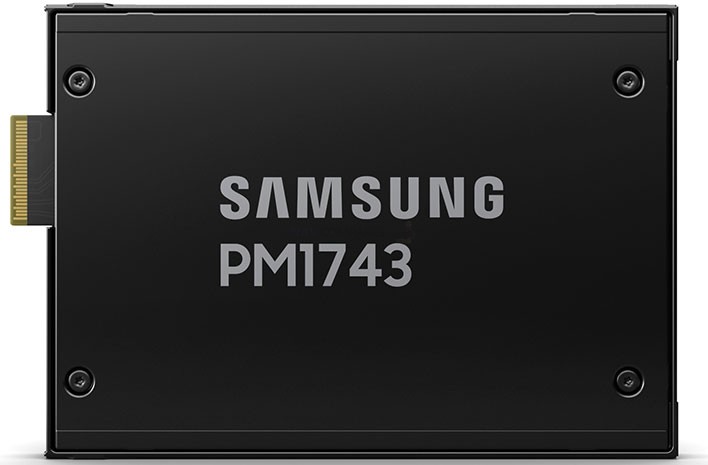 When Will the Samsung 990 Pro SSD Be Released?

According to the brand’s own reports/press-releases, the Samsung 990 PRO will be available worldwide starting this October with the manufacturer’s suggested retail prices (MSRP) of $179 for the 1TB model and $309 for the 2TB. A 4TB capacity version will become available in 2023.

Terms and Conditions Alternatively, why not ask me on the ASK NASCompares forum, by clicking the button below. This is a community hub that serves as a place that I can answer your question, chew the fat, share new release information and even get corrections posted. I will always get around to answering ALL queries, but as a one-man operation, I cannot promise speed! So by sharing your query in the ASK NASCompares section below, you can get a better range of solutions and suggestions, alongside my own.
If you like this service, please consider supporting us.
We use affiliate links on the blog allowing NAScompares information and advice service to be free of charge to you. Anything you purchase on the day you click on our links will generate a small commission which is used to run the website. Here is a link for Amazon and B&H. You can also get me a ☕ Ko-fi or old school Paypal. Thanks! To find out more about how to support this advice service check HERE   If you need to fix or configure a NAS, check Fiver   Have you thought about helping others with your knowledge? Find Instructions Here