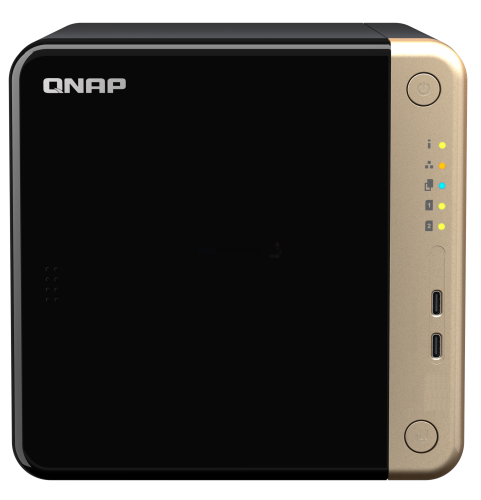 The QNAP TS-464T4 – World’s First Thunderbolt 4 NAS Drive If you are a thunderbolt user and have been looking at network-attached storage (NAS) in the last few years, then it would have been impossible to avoid QNAP. They have been one of the very few brands that have been able to merge the use […]

Thunderbolt DAS for QNAP NAS Do you know of any other Thunderbolt 3 DAS /RAID array other than AKITIO products that works when connected to a QNAP NAS? I recently purchased a TVS-472XT (core i3 version) and was hoping to connect my Netstor NA622TB3 to it but it just doesn’t work. QNAP shows TB3 port […]

8 Bay DAS Enclosure (USB 10Gbit or Thunderbolt 40Gbit) I’m a fan of your work. I think you’re doing a great job. You just cut through all the marketing speakers and deliver the facts. You seem to be in tune with the NAS industry so I have a question for you. I’m currently looking for […]

TerraMaster Introduces Upgraded D8 Thunderbolt 3 8-Bay DAS Multiple RAID Supports The D8 Thunderbolt 3 can operate with RAID 0, 1, 5, 6, and 10, as well as JBOD disk array modes for all your application needs. This underpins the all-important concern for guaranteed data security, and it ensures that your storage capacity is utilised […]

Need help with DAS planning I’m planning on building a new DAS for migrating current hardware RAID 10 with WD 4TB × 4 in QNAP TR-004. Wanted specifications below. Hardware RAID with write speed gain (Enclosure or RAID card) RAID 6 and 10 Expandability up to 8 drives Capability of adding new drives to the […]

So I bought the Akitio dock and I am not a fan, part of my whole process is simplicity and the power supply larger than the dock, I’m realizing now other than the 10gbe port, there’s nothing I would use (don’t need CFast or USB 3.0, I’ve switched over mostly to USB-C). I was curious […]

Thunderbolt3 conversion to cat5 Hi, i saw your videos on youtube, i was wondering to know IF, is possible to connect TerraMaster TD2 to a cat5 using the second thunderbolt3 port… Is this unit only a local unit?? or can i uses this one like a cloud too No, this is a DAS box. You […]

NVME DAS? Message Body: Hello! I was gifted two 2TB Sabrent Rocket Q NVMe PCIe M.2 2280 SSDs and would like to put them in a storage/DAS of some sort that is Thunderbolt 3. I am using a 2018 Mac Mini. Are there any other products out there than what Netstor makes? Thunderblade ThunderBlade delivers […]

D8 THUNDERBOLT 3 8-Bay Thunderbolt 3 RAID storage for video editing and photographers   Large Storage Capacity TerraMaster’s 8-bay D8 Thunderbolt™ 3 is compatible with 3.5″ SATA disks and 2.5″ SSDs, allowing professionals to capitalise on a total storage capacity of up to 96TB. As a result, you can be assured the device gives you […]

I recently saw a video where someone was using the TVS-472XT to have two editors access the same media at the same time through thunderbolt 3. Since each thunderbolt port creates a new IP address, they had to relink media every time they switched ownership of a project file because somewhere in that metadata the […]

We are a wedding photo/video company. We currently do about 100/125 weddings per season and are looking to do about 200 next season. Each wedding on average we will yield about 200-500 gigs of data. I have been doing a lot of research on the NAS systems but still can’t seem to find or know […]