The QNAP TVS-x73 Series has been announced – Gold just got better! 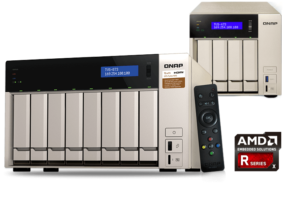 Good news for those who are waiting for the more powerful NAS units in QNAP’s 2017 line-up, they are to release the newest Gold Lightning Power NAS, the TVS-x73 range of business and high end Network Attached Storage server. The original Gold NAS series released in early 2015 was a real game changer. Looking more bling that snoop dogs bath tub, this range of 4, 6 and 8-Bay NAS devices really made a mark on the marketplace. Featuring a new and highly graphic capable AMD CPU, this NAS was one of many that started to make the Synology NAS users look over in envy. However times change and competitors catch up. It is time to see what else QNAP NAS has under it’s sleeve . 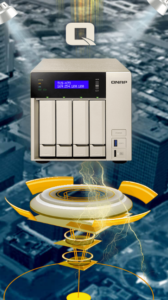 The new and improved version of the QNAP Gold Series of NAS features 3 units, the QNAP TVS-473-8G 4-BAY NAS, the 6-bay QNAP TVS-673-8G and finally the biggest and beastliest of the tree, the QNAP TVS-873-8G NAS. Like their predecessor, this unit features an AMD CPU. However this time around it is an AMD RX-421BD R-Series Quad-Core with enhanced APU for Graphics, Data Processing and Performance. No real word confirmed on Memory, but I imagine we will see a 4GB DDR4 version and a 8GB version of each size (i.e QNAP TVS-473-4G, QNAP TVS-473-8G, etc). Alongside this there has been enhanced work on the chassis of trhe device and a new much more modern designed outer casing is being used (see image). It combines the aggressive and sturdy design of the QNAP TVS-1282 and but with the wonderfully gold finish of the QNAP NAS Gold Series. An of course (like the TVS-1282T) this unit features dual internal m.2 SSD slots too. So a huge degree of hardware power for your money

What else is new with the QNAP Gold NAS TVS-x73 series?

To be mentioned shortly at QNAP’s own big event, these units will be perfectly suited for AND feature the latest version of the QNAP NAS Operating System, QNAP QTS 4.3 (which presumably will be spread out and available on other NAS units too). Also there is mention of the partnership with Panasonic and the inclusion (at additional cost)of their Data Archiver Hardware. From Panasonic, this 50 Year Data Retenton and Protection Plan includes the LB-SC9 Compact Archiver. Various types of data for each job or project are collected on the LB-SC9, and then stored on multiple (12 per cartridge) Recordable BD-R Magazine. Managing the Magazines on shelves keeps them neat and clean, which is helpful for long-term archiving and giving you upto 50 years of data retention and long term data backup as a whole.

The first thing that grabbed my attention is that the TVS-473, TVS-673 and TVS-873  all feature the USB Direct Attached Storage Port (as seen on the TS-251A) which provides users with both a local and a network accessibility to their hardware. We are still waiting for firm information on how people have enjoyed the USB 3.0 DAS abilities in the TS-451A, but it is still a welcome addition to many. Alongside this the unit will feature USB 3.1 ports and will come as a lovely surprise to many higher end users. Ask expected the unit also arrives 10GBe Ready – though whether this is via additional purchase of a PCIe card or included has yet to be confirmed. In keeping with the evolution of the previous Gold Series NAS and the later released TS-453A, the unit also features Dual HDMI ports and 4K Support. As well as both 4K and HD transcoding.