With sales time almost upon us, many buyers are looking to buy a new Synology NAS. Whether you are buying your first NAS server, or you are upgrading your pre-existing Network Attached Storage device, there are a great many advantages to investing in a solid 4-Bay NAS solution. Notwithstanding the obvious advantages that being able to populate it with a larger number of drives than a simple 2-Bay NAS, there are a host of other reasons including but not limited to:

However, knowing you want to buy a Synology NAS 4-Bay is just the beginning. The official specifications for each NAS are published by Synology , but that are page after page of complex data and you can soon get confused about how each 4 HDD NAS is different, and what exactly means good and what means bad. Whether you are looking for a bargain this Black Friday, Cyber Monday, Boxing day or even a January sale purchase, Synology is often regarded as one of the best brands in NAS and therefore many will see their units first and then get a little lost amongst the range. Today we will compare all of the current 4-Bay Synology NAS servers you can buy and find out the which is the best NAS for you?

Which Synology NAS is the best for Price? 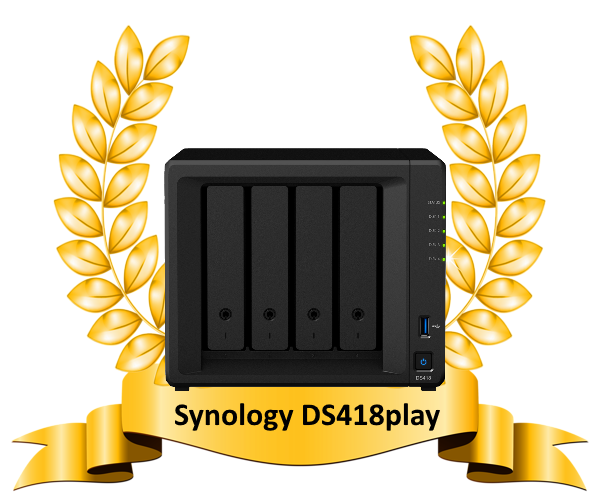 The cost of a NAS server can often be the biggest decider on choosing the right Synology NAS for your needs. Prices start out as low as £250+ ex.VAT and go up as high as £450+ ex.VAT – and that is before you have even installed a single Hard Drive or SSD. So for many, the price tag is very important. Perhaps you go for the cheapest NAS and hope for the best, or you buy long-term and go for the most expensive – either way, what you want is VALUE for money! In terms of price vs hardware, the Synology DS418play is the outright winner as it provides solid hardware inside to support common features like Apple Time Machine, Plex, DLNA, 4K Playback, Transcoding, Office applications and more. Whereas if your budget is small or a little tight, then you can always consider the DS418J as even though it is rather low in price, the hardware inside is still pretty good for comprehensive RAID storage, DLNA media servers, download servers, mail services, files storage and Surveillance.

What is the best Synology NAS for Software?

All Synology NAS server devices arrive with the award-winning DSM (Diskstation Manager) currently in version 6.1 (with DSM 6.2 in beta). But the extent to which they perform is where you will need to be selective about the Synology NAS 4-Bay that you choose. As mentioned, they all have a basic level of support for the traditional areas of network storage like Media, Backups, File Distribution, Surveillance, Encryption and Internet Access – but with each device tier (first J, then Standard, then Play, then Plus) then maximum number of users, tasks, resolution, instructions and operational density increases. So it goes, that the more you want to do with the NAS and the more users you want to access the NAS, the more you will need to pay. Once again, the DS418play is the sweet spot for those who want all the options on a lower budget BUT just spending a little more and getting the Synology DS918+ will ensure you get a NAS that can pretty much do ANYTHING that the Synology DSM software can offer.

Choosing the Right Synology 4-Bay NAS Based on Performance

Second, only to NAS price, the performance of a 4-Bay NAS will be one of the biggest things affecting your NAS purchase. The Hardware under the bonnet of each NAS will greatly affect the overall performance of the NAS server for the tasks you have in mind. Of these units, it is clear very early on that it is the Plus series DS918+ NAS has the greatest CPU and RAM options available. This coupled with the ability to expand that memory in the NAS from 4GB upto 8GB is a welcome option to those that want to upgrade a NAS years into its lifespan. There is a reason it is considered the top dog of the Synology 4-Bay NAS pack for 2017 and 2018. 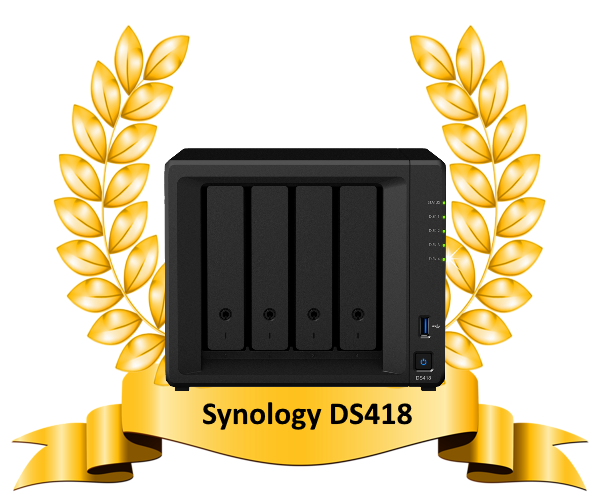 That said, you should not overlook the cheap NAS at the end of the line – DS418j. This does mean that it is unsuitable for Plex Media Servers in terms of transcoding HD and 4K media, as well as VMware and Virtualisation in general, but still never skip them if you need a solid, robust NAS that can perform traditional Network Attached Storage tasks and DLNA NAS services in your home or office. Finally, there is the Synology DS418play that manages to provide the best of both worlds in a well-performing CPU from Intel and 2gB of DDR3 Memory. The DS418play should be your middle ground NAS when deciding between home and business needs.

As mentioned earlier, buying your first 4-Bay NAS opens up a larger degree of connections and how you access your NAS data. Once again, it is unsurprising that the most expensive NAS is the Best NAS in this field.

Featuring dual LAN ports to provide Link Aggregation (that can double your transmission speeds if you own a smart switch from Netgear or a LAG enabled router), comprehensive USB 3.0 ports to connect several external devices at 5GB/s speeds and eSATA at 6GB/s. However, if you choose to buy a Synology NAS such as the DS418J or DS418.

Then you will see reductions on all these fields and if direct NAS access is a deal-breaker for you, then you would be wise to spend the extra and for a Synology PLUS series NAS. Once again, consider the DS418play the middle of the pack on this and one to buy if you are having difficulty deciding. Lastly, in the Synology 4-Bay or NAS range, the key thing to look for is an eSATA port as that is how the Synology 5-Bay expansion DX517 NAS connects and this is possible with only 1 of the Synology Desktop 4 Bay NAS server devices, the Synology DS918+ NAS. Hence the 9 in the title.

Which Synology 4-Bay Diskstation NAS consumes the most power and makes the most noise? 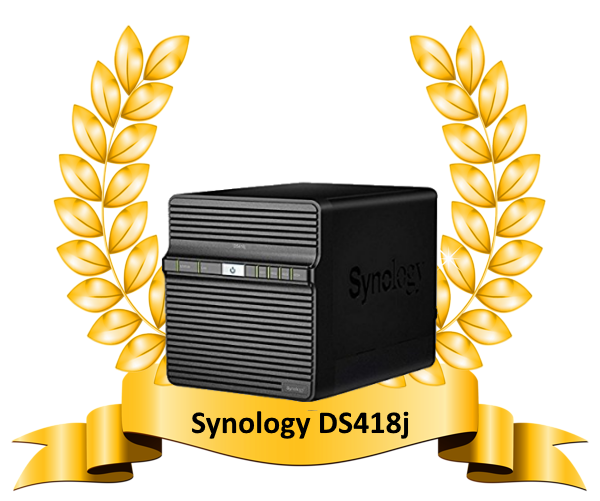 Network Attached Storage devices can be left on for days, weeks, months and (though not advised without the occasional restart) years! This can mean that for many users (especially Home users, but not limited to just them) that NAS power consumption can be an important factor. Four Bay NAS on paper consume more power than their 1 and 2 Bay brother and sisters, however, once you take into account the amount of power consumed by a number of Drives and via multiple LAN access, the power used is quite relative. Obviously, the higher the CPU frequency, the number of cores and the amount of RAM plays a big factor, as does the drives you use. All the stats shown are for filling the boxes below with 4x 1TB WD Red WD10EFRX drives and the results are quite telling. However, it should be clear that he more budget-friendly NAS is lower in power consumption due to their hardware being less demanding. If however, you want full capability at the lowest power consumption possible in a Synology 4 Bay NAS, I have no hesitation in recommending the Synology DS418play NAS, as it gives a good balance of Power vs Consumption.

Which Synology NAS is the best for a Plex Media Server?

Almost all four of the new Synology 4-Bay NAS server devices can act as a Plex Media Server, with performance being unavailable on the DS418 and DS418J. However, the big, BIG difference is the ability to transcode. When streaming media over the internet from your NAS device, to your iPhone or iPad via Plex, sometimes the files you play are going to be too big to play, an incompatible format or with a resolution incompatible with the viewing device. A NAS such as the DS418PLAY or DS918+ has the transcoding engine on board so it can make these changes on the fly for you. However, the DS418J does not have plex compatible hardware and therefore not suitable for an ideal Plex Media Server NAS.

Which Synology NAS is best for 4K Media, 1080p Streaming and Transcoding?

Which Synology NAS is best for Warranty and Support?

Pretty simple one here. Synology has locations worldwide and often the handling of your RMA can be done with your local distribution centre. When buying with SPAN.COM for your NAS, they will assist you with Pre and Post sales technical support and both they and Synology have a fairly fast turn around and will assist you with their technical team. However the length of the manufacturer’s warranty is the same on the DS418j, DS418 and DS418play at 2 years and if that isn’t enough for your peace of mind, you can go for the DS918+ NAS which arrives with 3 Years of warranty.