The Seagate Ironwolf series of NAS media has been around for a few years now and what started as a rebranding of their ‘NAS’ labelled series has now become a multi-tiered series of Hard drives and SSDs. Recently Seagate introduced a new entry into their Ironwolf SSD series with the 525 NVMe SSD. Presented as a higher bandwidth supporting alternative NVMe SSD to the Ironwolf 510 (released back in March 2020), the Ironwolf 525 is a PCIe Gen 4 NVMe SSD that arrives in slightly larger capacities, much higher performance and still allowing backwards compatibility with PCIe Gen 3 m.2 slots in your NAS. So, with the release of this newer, faster and widely supported NVMe SSD, should you still consider buying the Seagate Ironwolf 510 at all? Well, yes! The older Ironwolf 510 still arrives with a few rather unique architecture and design choices that are not available in the Ironwolf 525 and today I want to take a close look at each of these NAS focused SSDs and help you decide which one you should buy for your NAS drive in 2021/2022. 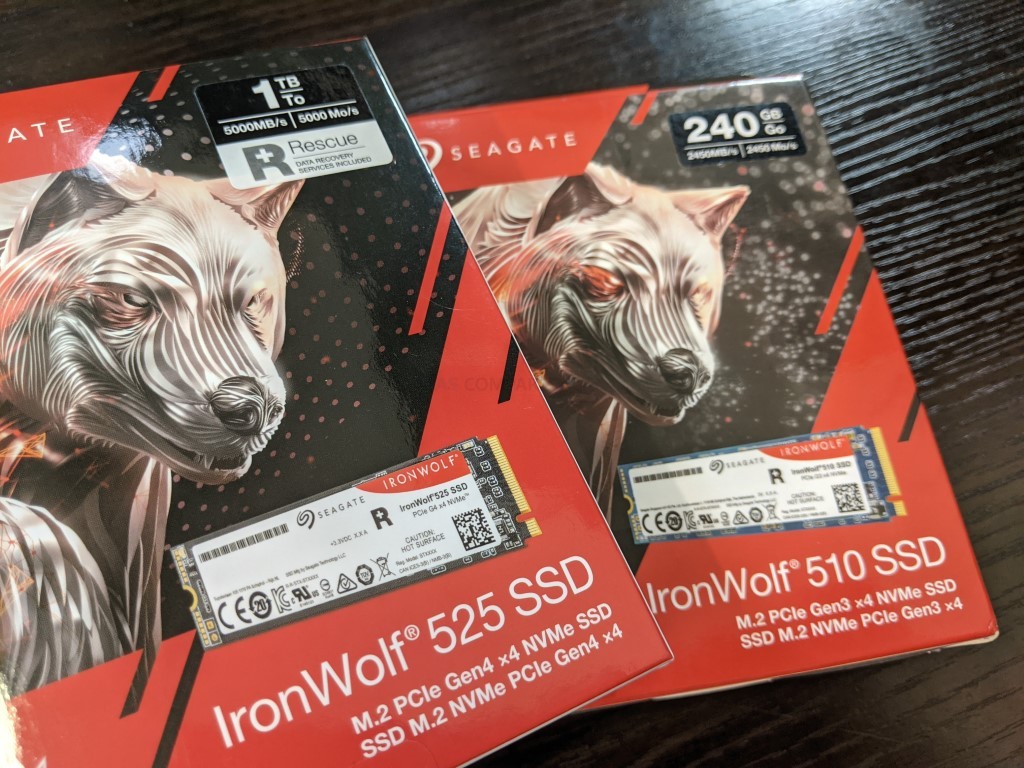 Important – It is worth remembering that the two SSDs in today’s comparison are m.2 NVMe in architecture and although PCIe Gen 4 is compatible with Gen 3 and old, they will not suitable for NAS drives with M.2 SATA connections. We have seen more modern NAS systems released in the last few years abandon m.2 SATA in favour of its PCIe counterpart, but Seagate provides SATA alternatives in their Ironwolf series. Examples of SATA SSDs for NAS can be found HERE on Amazon. Additionally, it is worth highlighting for the later stages of testing in this comparison, I was only able to obtain the 240GB model of the Ironwolf 510, so although the performance shown is low (and much lower than the Ironwolf 525 as expected in most cases) it is particularly low because the test drive is the 240GB Model. Please follow the official performance specifications in the table below for a better indication of how comparable capacity drives would differ.

Seagate are well known for their wide ranges of hard drive and SSD media, as well as both being pioneers of NAS server focused SSDs for caching and flash storage. Although SSDs are all built to a similar ground-level architecture, they will often have their later development shifted in favour of a specific targetted use. This is not a big surprise and much like the cutlery in your kitchen draw, they might be similar but one tool is much better at some tasks than others – ever tried using a spreading butter with a meat-claver? Or stirring tea with a ladle? The Seagate Ironwolf 525 and Seagate Ironwolf 510 SSD are NAS targetted and although the performance is good, the true stand out factor in this design is the durability of the drive. SSDs for use in NAS systems will in most cases be used for caching and that means a very frequent turnover (i.e. data wrote, updated, deleted, repeat) daily as the demands of client users and devices change. Both of these SSDs arrive with a high level of durability and workload rating, but the Seagate Ironwolf 510 and Seagate Ironwolf 525 definitely have differing ideas of preliminary architecture and what that price tag is being spent on. Let’s look at the shared base-level SSD architecture of each SSD (available on every capacity):

Below Specifications are taken from official brand sources, data sheets and reputable sources (real-world tests we performed ourselves are a little lower in the article):

Overall, it should come as no surprise that the Seagate Ironwolf 525 is the notable leader here in practically all official benchmarks over the slightly older Seagate Ironwolf 510 SSD, thanks to that improved architecture. Most notably in write performance and IOPS in general, it had a clear lead even in the lowest available capacities. Of course, these are officially provided performance figures and represent maximums based on the highest available hardware at the time of release. Let’s take a look at how these two SSDs compare in our own tests.

Moving away from the official performance stats provided by WD and Seagate, I wanted to see how the Seagate Ironwolf 510 and 525 compared in my own tests. Testing of these two SSDs will be broken down into 3 main parts, a CrystalDisk Benchmark test, Atto Disk Benchmark Test and an AJA media test. In each test, the SSD was in the 2nd storage slot (i.e not the OS drive). Each test was conducted three times and the system was left for 1 minute between tests to allow the SSD time to stabilize. The specifications of the test machine are: 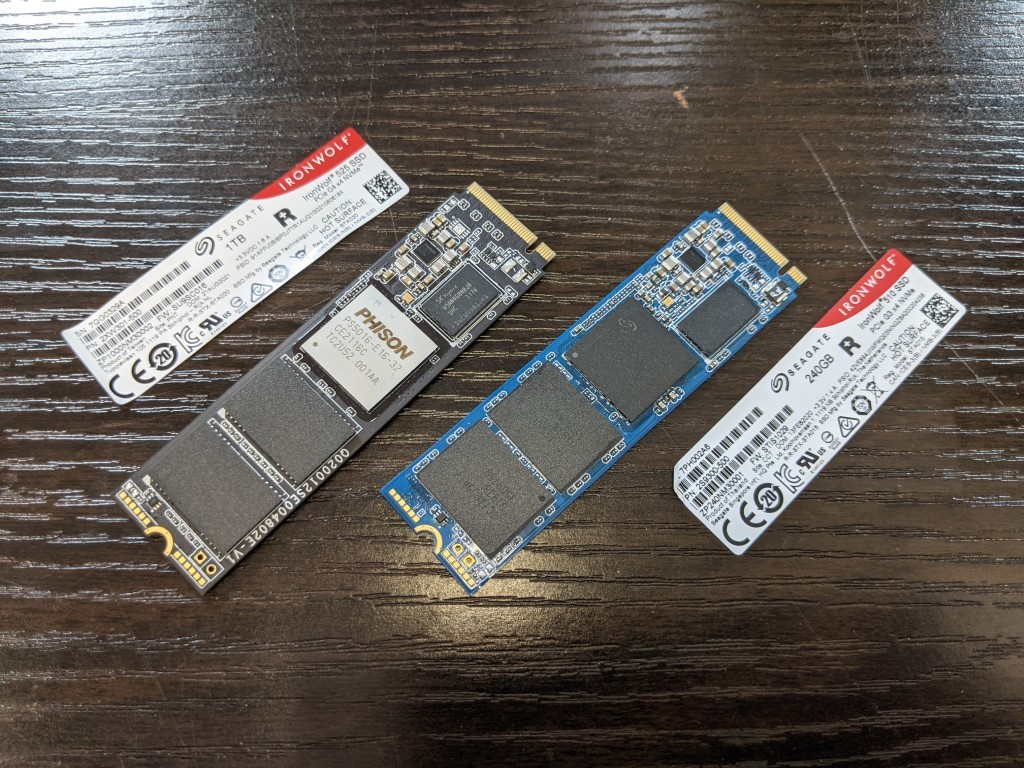 CrystalDisk is still highly regarded as one of the most reliable tools for measuring storage media performance. Though it does create somewhat high-end results that may not be truly indicative of your own real-world setup, it can be used to display maximum potential throughput and IOPs at each tier. The first test for the Seagate Ionwolf 510 and Seagate Ironwolf 525 was on a 1GB test file:

The next test was to perform the same parameters in CrystalDisk on the Seagate Ironwolf 525 and Seagate Ironwolf 510, but this time with a 4GB test file (larger files may result in higher sequential performance, but lower comparative IOPS):

Switching things up, I then moved testing the Seagate Ironwolf 510 and Seagate Ironwolf 525 over to ATTO disk benchmark. A far more detailed tool that spreads performance testing over different file and block sizes. I started with the smallest ‘full range’ test file of 256MB (as smaller would reduce the range of block sizes). Here is how each SSD compared:

Sticking with ATTO DiskBenchmark, I then moved the testing of the Seagate Ironwolf 525 and Seagate Ironwolf 510 onto a x16 bigger test file of 4GB. This would certainly shift where the peaks in performance would sit and hopefully produce a clearer disparity between these two SSDs:

I then switched to AJA, a popular media testing tool for video formats. Most SSDs will suffer over-saturated Memory/DRAM/SDRAM as sustained large file tests go on. The 1GB file test of AJA on the Seagate Ironwolf 525 and Seagate Ironwolf 510 is still a small enough value not to be a problem though and we chiefly focused on the disk playback/reads graph to see how they compared in peak performance and also throughout the transfer:

Then we used a much, MUCH heavier test in AJA of 16GB on the Seagate Ironwolf 510 and Seagate Ironwolf 525. Unsurprisingly this can often overflow the SSD cache/memory on board and result in a dip in performance as the SSD bottlenecks internally. So, when conducting this test, we are looking at peak performance AND how long the SSD maintained that performance before a potential dip. Here is how these two SSD compared:

It is probably no surprise that the Seagate Ironwolf 525 is the better drive overall. With performance in throughput and IOPS that outshine the Ironwolf 510 in both Read and Write on a PCIe Gen 3 m.2 slot,  then upping the ante considerably by allowing 2-3x that performance via a PCIe 4 M.2 Connection. That said, the adoption of PCIe 4 x4 as the connection of choice in a NAS is currently very low indeed, largely down to the large availability of PCIe 3 SSDs in the market AND the simply fact that manufacturers would need to dedicate notably more CPU PCIe Lanes to a Gen 4 connection than they would a Gen 3 (lanes that might be better used in improved NAS external connectivity or other hardware services). Additionally, the Seagate Ironwolf 510 has higher durability in all capacities, as well as a smaller 240GB capacity for those considering caching on much smaller systems/HDDs. The Seagate Ironwolf 525 is still the better SSD choice over the Ironwolf, but if you see it at a bargain price, have intensive data re-writes in mind or are looking for a smaller SSD, it’s still a viable option. And don’t forget, both SSDs include that 3 year Rescue Data Recovery service and Seagate Ironwolf Health Management that is accessible via your NAS Storage Manager (supported on Synology, QNAP, Asustor and more). 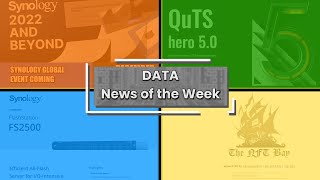