The cool new tech continues to be revealed at Computex 2019 in Taipei and over at the QNAP stand we have learnt about another brand new device – the Guardian QGD-1600P NAS Server. Aimed at SMB (small business) and home users who are looking for a little more power and functionality at their fingertips, as well as combining the power of a NAS with the functionality and accessibility of a PoE switch – in ONE BOX! If this is not enough, it features a brand new CPU in the NAS industry too.

There has certainly been a move towards the more prosumer buyer from QNAP this year, with its selection of affordable 25Gbe cards and getting more out of the Aquantia controller processors, therefore the Guardian QGD-1600P makes a lot of sense in this framework. But where do YOU come in? Is this going to answer your storage needs? Does this mean you will never need a switch ever again? QNAP boosts networking efforts to roll out a refreshed Guardian QGD-1600P that integrates managed switch, Power over Ethernet (PoE) capabilities, and NAS into one device. The QGD-1600P is a 16-port managed switch based on the Microchip VSC7425 that features port-based PoE control and is IEEE 802.3bt ready with power level up to 90W, and supports VLAN and QoS. The QGD-1600P also features an Intel Celeron J4105 processor, two 2.5-inch SATA drive bays, two PCIe slots, HDMI output, and runs the QTS operating system with the App Center to realize various applications including virtual machines, containerized apps, and video surveillance. So, in short, this is a serious switch that is backed up with a serious amount of NAS – or vice-versa!

Who is the QNAP Guardian QGD-1600P NAS Switch Targeted at?

What are the Hardware Specifications of the Guardian QGD-1600P NAS?

The hardware that is featured in the QNAP Guardian QGD-1600P NAS drive is a good mix of architecture found in other existing QNAP NAS and comparative upgrades of its predecessor (that CPU especially). Thanks to its appearance at Computex, we are able to share a fair sized amount of hardware information on the Guardian QGD-1600P 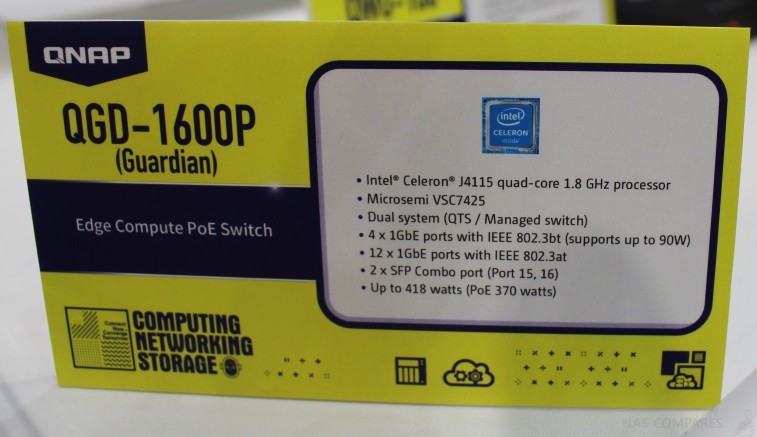 That is everything we know about with regard to the hardware in the Guardian QGD-1600P NAS from QNAP, but with this in mind, I think we will be able to deduce the following software support from QNAP in QTS 4.4.1 upon release. The support to you in your storage environment will certainly more than just a mapped network drive (such a waste!). Plus, as there is a USB 3.0 port, you are not restricted to the fast, yet smaller capacity 2.5″ SSD media.

What are the Software Specifications of the Guardian QGD-1600P NAS Switch?

I am pleased to confirm that the Guardian QGD-1600P will support the latest version of QTS 4.4.1 (the latest revision with a bunch of beta applications and updates for QuMagie, Download Station, Photo Station, Multimedia Console and more) and continued support of third-party applications. This CPU has appeared (technically!) in other NAS drives in QNAP’s portfolio, so, therefore, we can make a few educated guesses as to the applications that will be supported at launch.

Also, there is a dedicated network switch application for complete management of the switch functionality of the Guardian QGD-1600P found in the QTS GUI on this device, allowing you FULL access to both the QTS browser-based desktop (for many users at once), as well as the switch management panel for all users or just admins.

When will the QNAP Guardian QGD-1600P NAS be Released and What Price?

QNAP were a little more vague about the release of the Guardian QGD-1600PNAS and Switch Combo. It was first announced back in Jan/Feb of 2019 and already featured a CPU change! So, if this si the final version of this device, then we are likely to see it around September of this year, But these things can always change!