I’m a newbie to the QNAP system but doing my own IT for a long time. I’m running a 10Gb network in my house and upgrading to dual 1Gb internet connections since I work from home. I was building my own virtualization server and planning to do my own NAS but eventually decided to just get this QNAP for fast NAS. I was really sick of spinning rust and liked the idea of an all SSD home NAS.

I’ve been doing a lot of research on RAID and SSD. It seems like there are a lot of negatives with using RAID on SSD from wearing it down faster to having even wear on all the drives, etc. It seems like most experts say using JBOD is perfectly fine as long as I have a good backup strategy. I was planning to use the QNAP cloud backup to B2 or something like that. So I was wondering for the TBS-453DX, what storage strategy would you recommend. RAID 0 vs JBOD vs something else? I guess another strategy is to provision individual volumes for different shares… but I wanted to have as much backup space as possible for my multiple computers and photos and videos, etc. I probably only have about 3 TB or less to backup right now, but want to be prepared for growth which is why I like the 8TB JBOD idea. As long as I can recover if necessary. Maybe I’ll add an external 8TB USB drive as a backup storage copy. Any thoughts on that?

There are good news for you. If you choose a Qnap as your NAS, then you can benefit from their internal functions like SSD Write Amplification, SSD Over-provisioning space, and pre-defined over-provisioning. This ensures that SSD gets worn down equally “sector by sector”.

Here is what Qnap have written:

The pre-defined over-provisioning amount or specified utilities given from disk vendors still lack the flexibility and manageability for IT staff to directly measure and deploy such solutions.

Software-defined SSD awareness: Performance-driven to cater your needs with

SSD prices continuing to fall, they are becoming an increasingly cost-effective solution for boosting NAS performance. But to make the most of their amazing potential, you not only need the right SSDs – but also the right NAS! QTS 4.3.5 transforms QNAP NAS into SSD-aware storage with cutting-edge “software-defined SSD extra over-provisioning” technology alongside advanced SSD caching. Given the favorable flexibility to adjust SSD over-provisioning, you can enjoy better SSD performance and endurance – allowing you to potentially attain enterprise-grade SSD performance levels from affordable consumer SSDs! 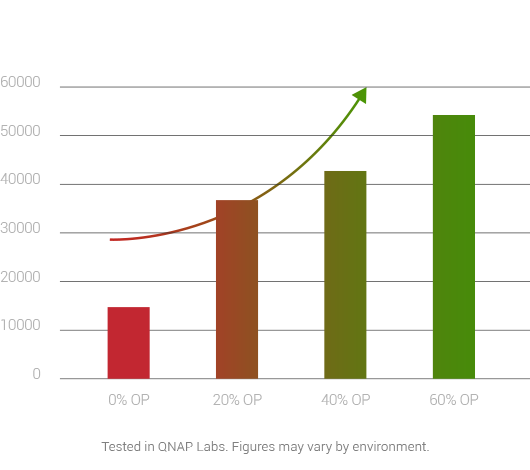 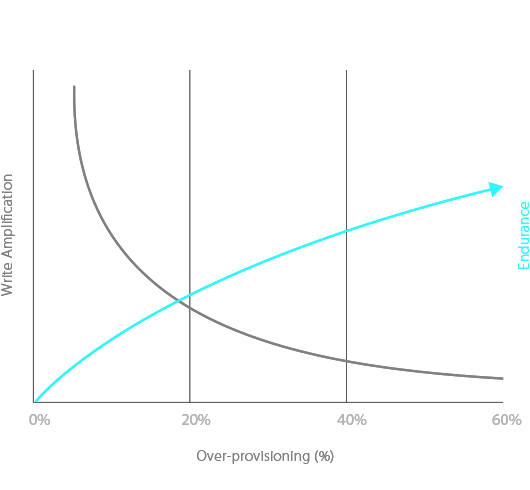 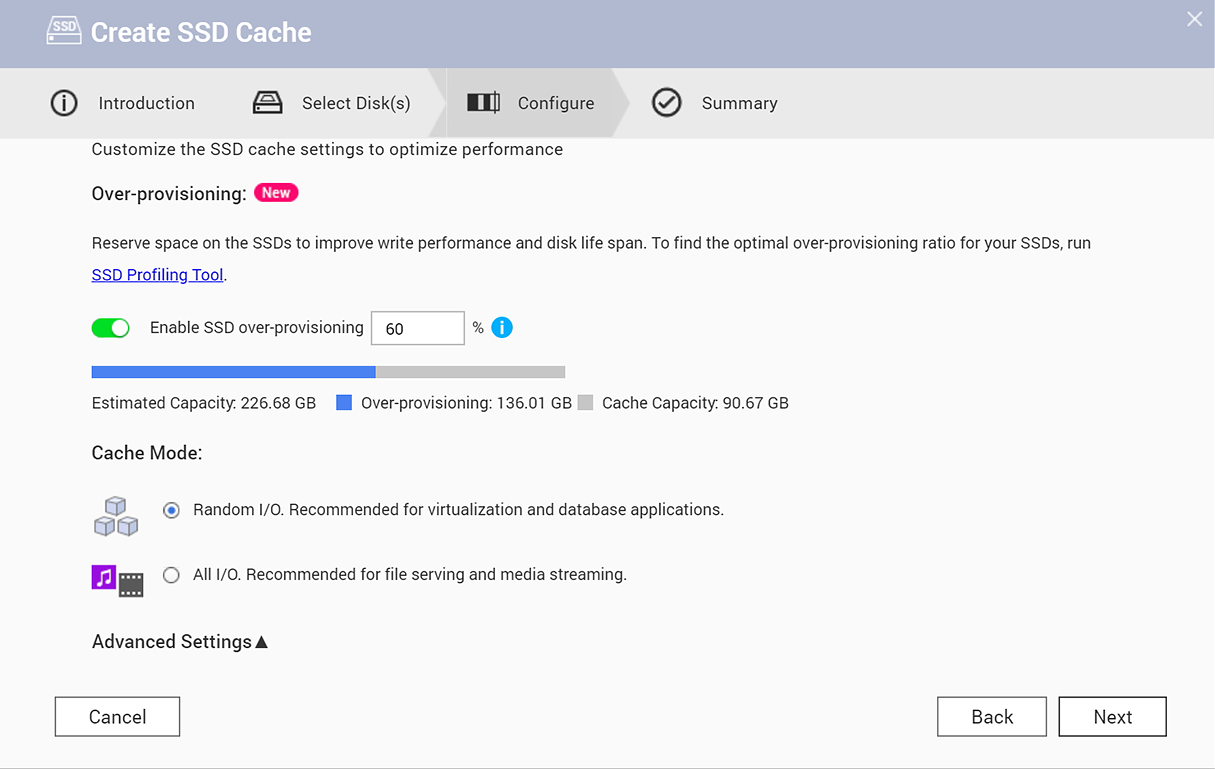 Add up to 60% over-provisioning

Note: Over-provisioning can only be configured when a storage space is created. It cannot be set for existing SSD caches or volumes. 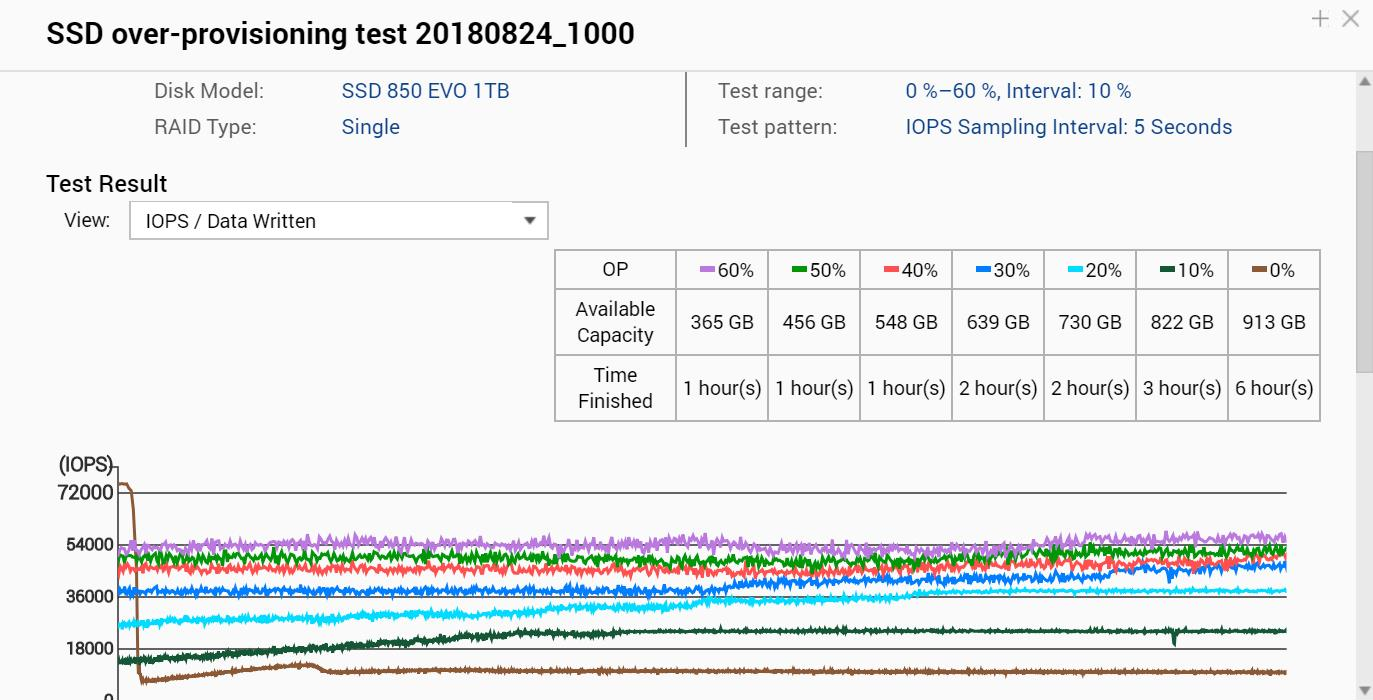 Identify the optimum over-provisioning ratio with the SSD Profiling Tool