I’m following the pre build NAS world for a while now and I’m a bit stunned how pricey they are compared to what’s available in terms of hardware and software today.

So for a while now a NAS is not just used for storage via a network nor is it advertised as such. It’s becoming more of an all round type off “server”with a lower power consumption compared to a traditional similar type off server. This is also how i want to use one as a flexible home server. The last couple of years the hardware is wildly available to do that for a lower price. But i don’t see it being offered bye any of the NAS manufacturers. There is also a wide range of free open source OS software available and some of them in my opinion are superior to the OS they provide.

I would need to buy one off their top tear enterprise devices to come remotely close to something i want in terms of power and probably not use half of the available bays etc ?

So how can you justify the cost of a that and in general any pre build NAS ?

For example in the pc world OEM’S big and small in general provide attractive and sometimes lower priced devices compared to a similar DIY solution. Which makes sense because they can buy and produce in bulk.

How would you not build something yourself invest a little time in building it and doing research and have something more powerful more power efficient for a fraction of the price?

There is a cheap NAS like Terrmaster and WD, Zyxel. But with brands like Qnap and especially Synology, you don’t pay for hardware but software. You get so much more functionality which you have not though of. Also all these functions and apps are regularly updated and improved. As well as completely new apps will be developed. You also get a support and warranty to a complete system not each component separately.
​​​​​​​In fact, many people do build their own server and used cracked Synology software to run as an operating system.
There mush more added to a hardware then you think. I am just scratching the surface with few differences between DIY and leading NAS brand. 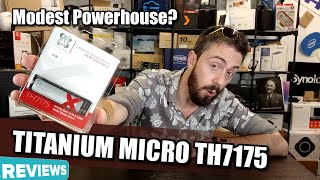