Next up in our ongoing look at the big brands that are showcasing their wares at CeBit 2017, I want to talk about Thecus NAS. Thecus is a company that is all too often overlooked due to their not being the dominant force they once were, in the eyes of the consumer. A lot of this can be put down to more money being chucked towards the hardware and less towards marketing – a mistake all too often made. But that said, things are really turning around for this often 3rd Place sitting NAS provider and with any luck could pull them into the top ranks again. Like QNAP, they are very much the front runners for new and exciting changes in NAS hardware and are not afraid of thinking outside the box. So, let’s talk about Thecus and what they will have on offer at CeBit in Germany this 2017.

Who are Thecus NAS and why should I follow them in 2017?

Thecus was established ways back in 2004 and actually first made a name for themselves way back on the data scene at CeBit 2005! So here are are 12 years later and countless NAS releases after, who are Thecus? Part of the Intel storage empire, it was purchased by Ennoconn in May of last year and since then have seen a big injection into their hardware and software alike. With a vastly improved operating system onboard all their NAS devices in Thecus OS7 and unique NAS devices featuring everything from in-built UPS for hardware and data protection in the event of power failure, all the way through to an excuse Windows Licensed series of WSS 2012 NAS servers for easy virtualisation. These are giving way to a series of WSS 2016 Ready NAS servers in 2017 and a follow up to their popular 2-Bay UPS protected NAS. In terms of hardware innovation, you are hard pushed to see greater innovation in the small 2-Bay or 4-Bay NAS market and with new and interesting 2017 NAS Servers about to be revealed, is now the time to jump ship?

What kind of thing are we expecting from Thecus at CeBit 2017? 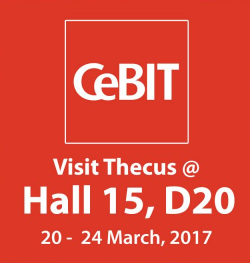 Thecus have already alluded to a number of their units to be released at CeBit in a recent statement in their news pages late last month. With a number of their devices being hinted at, model numbers supplied – but that is sit. No images, no PDFs, no information. So many of us in the storage community are wondering if this is a good thing or a bad thing. We can see from early reveals that their focus will be on the following:

Above and beyond that, we will see Thecus pushing their already massively improved operating system even further and it will be interesting to see the disparity between this software between the individual 2-Bay devices. You can find Thecus at CeBit here and of course do stay tuned to NASCompares to learn more and the wonderful world of data storage as the new releases come flooding in! Otherwise, below are my predictions and what to look out for with Thecus at CeBit this 2017

I have quiet hopes for the Thecus N2820 NAS. This is not Thecus’ first attempt at a NAS with an inbuilt UPS. There was a very, very well selling 2-Bay UPS enabled NAS a few years ago, as well as an oddly less popular 5-Bay N5810 Pro with similar UPS functionality. The market is very aware of the frailty of hardware (hence the demand for RAID protection in their storage enclosures) and if Thecus can release this UPS 2-Bay at the right time, I think the N2820 could easily be in our top 10 NAS of the year yet.

Another 2-Bay (2-Bay NAS are the bread and butter of the industry), this is aimed more at the people with a tighter budget and are happy to forgo a few features like HDMI, dual LAN and LCD screens. This may well not be the most exciting NAS at CeBit 2017, but it is still worth looking at, as like for like you will find better specs on a cost effective Thecus than you would on a Synology NAS. Keep an eye out for this one!

The Thecus N4820U is certainly a Rackmount NAS with the Home / SMB user in mind. With middle of the road specs and 1U 4-Bay Chassis design, it is not going to blow your socks off. But, with Rackmount solutions being notoriously more expensive, as well as being sold with the idea of it being something only an experienced IT techie can handle, it is pleasing to hear that Thecus having a cost effective Rack NAS solution for users who don;t mind getting their hands dirty and saving a few quid into the bargain. Plus, this uses the enterprise level supporting, user-friendly Thecus OS7 GUI with access to hundreds of applications to cater the device.