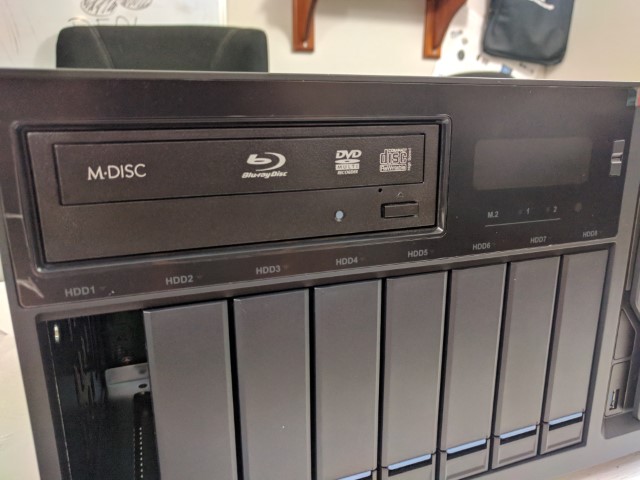 What are the Benefits of BluRay with a Thunderbolt NAS?

You can back up the content of your discs to NAS for long-term storage and easier sharing, or you can write NAS-based files to disc for an extra layer of data protection. Blu-ray Discs can also be played by the NAS when used with an HDMI display with virtual machines or Linux Station (third-party media player software required – may require separate license purchase). The TVS-882BRT3 comes with three PCIe Gen.3 slots. Two slots are preinstalled with dual-port Thunderbolt 3 expansion card, while the third slot allows for adding 10GbE/40GbE NIC, SAS storage expansion card, or a USB 3.1 10GbE adapter, making the TVS-882BRT3 ideal for diverse storage applications. 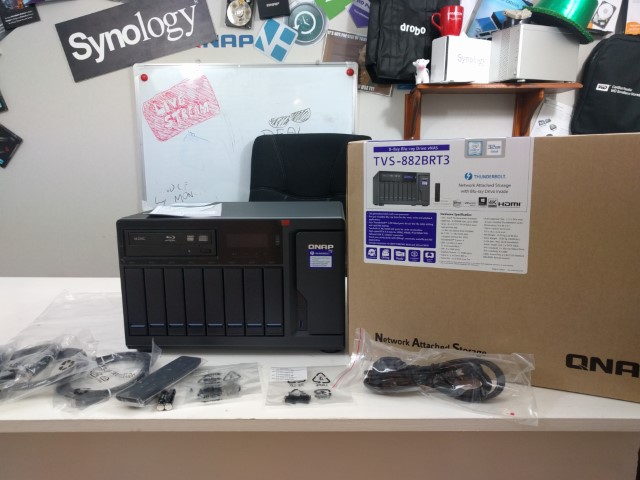 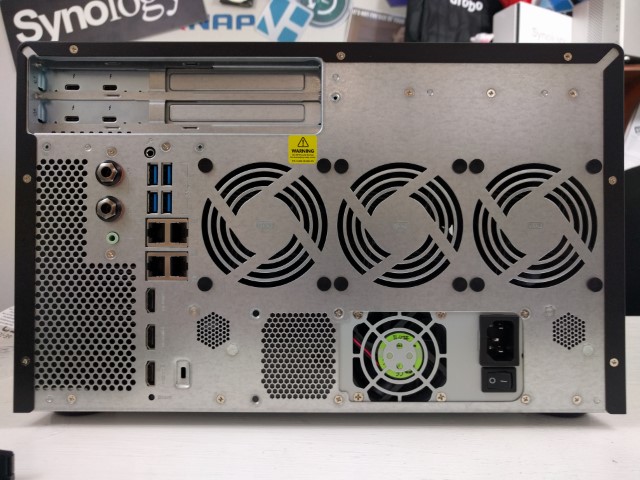 Powered by high-performance 7th Generation Intel® multi-core processors with options including Core™ i5 and Core™ i7 , DDR4 2133 MHz RAM (upgradable up to 64GB), four Gigabit Ethernet ports, and SATA 6Gb/s interface, the TVS-882BRT3 provides up to 447 MB/s read/ write speeds. 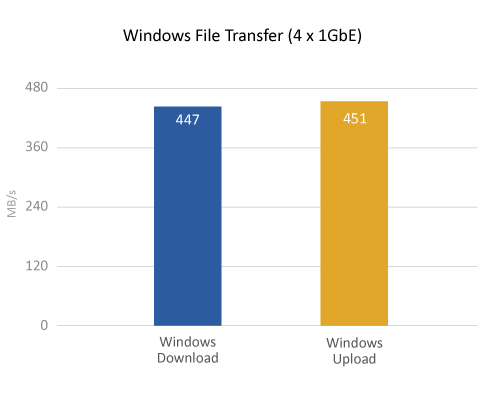 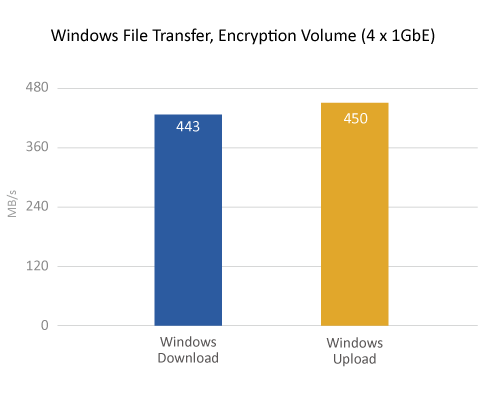 The TVS-882BRT3 features Intel® AES-NI-accelerated encryption for both full NAS volumes and shared folders to drive transfer speeds of up to 443 MB/s, boosting system performance and security while ensuring the safety of sensitive data stored in the TVS-882BRT3. The Thunderbolt™ 3 ports provide up to 40 Gbps bandwidth for high-speed data transfer. Users can also utilize its Thunderbolt 3 ports to have USB-C 3.1 Gen2 (10 Gbps) connectivity for quickly transferring and backing up large-sized media files from USB-C devices. 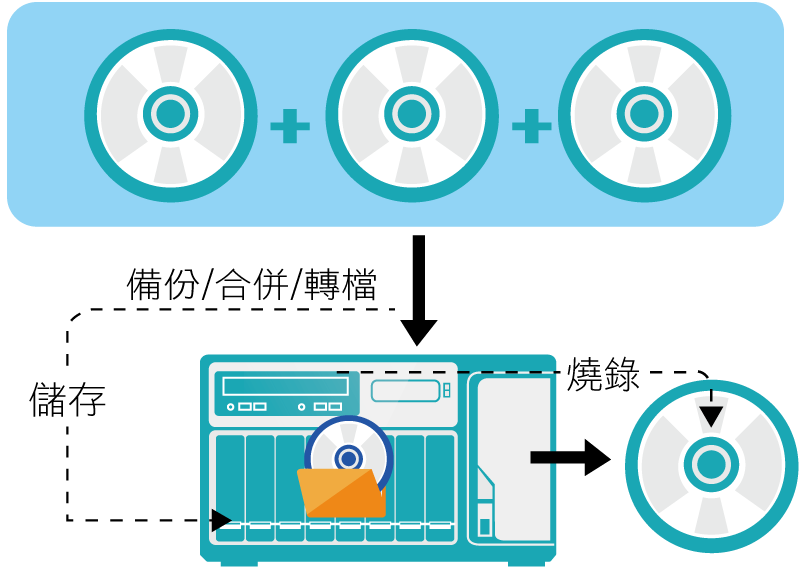 TVS-882BRT3 supports Blu-ray disc drives, enabling direct backup of your discs to NAS. Not only does it solve the difficulty of backing up countless discs but also helps make file management much easier. Coupled with Qfiling’s automatic file organization and Qsirch’s full-text search engine, the TVS-882BRT3 brings a whole new experience for you to easily manage all your disc files on a private cloud. Files stored on the NAS can also be written to disc for additional backup protection. Diversified application scenarios include: 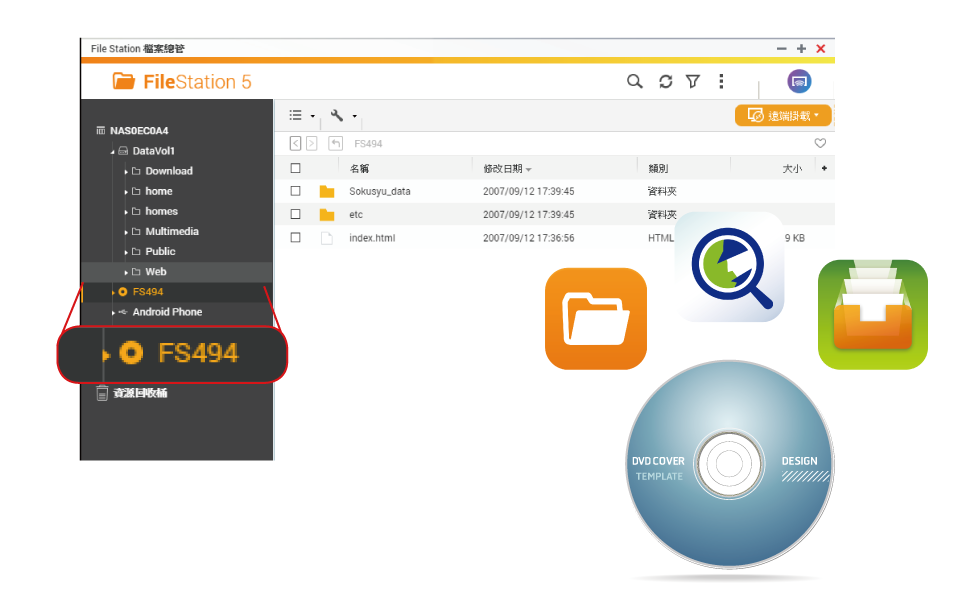 Enable high-speed collaboration via high bandwidth Thunderbolt 3 ports or install a QNAP PCIe 10GbE/40GbE NIC and use with a 10GbE switch.

The TVS-882BRT3 comes with a SATA optical disc drive (ODD) expansion slot allowing you to install a 5.25″ disc burner or two Slim SATA disc burners. The TVS-882BRT3 also supports USB disc drives. QNAP provides models with preloaded Blu-ray ODD for you to enjoy disc-related applications instantly. After installing the ODD, you can browse disc files directly through File Station and quickly backup the files to NAS, saving you time and trouble from transferring files to computer first then to the NAS. Multiple sharing modes (email, social network, sharing link, share to other NAS users) allows you to easily share information to others, solving the inconvenience of sharing disc files before. 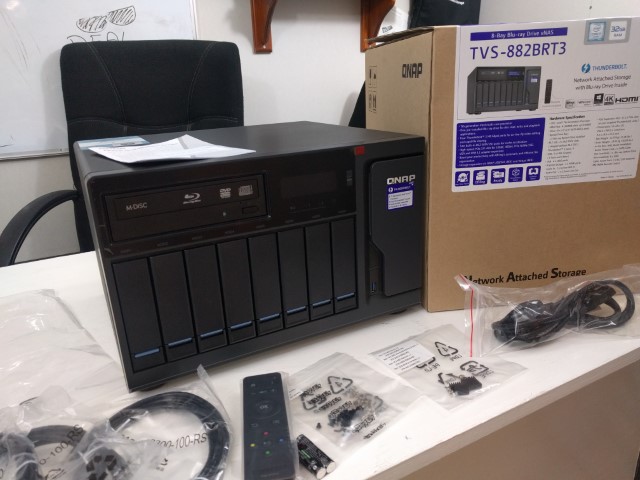 Create complete backups on your QNAP NAS with with DVDFab

DVDFab provides a convenient and user-friendly solution for optical disc backup and authoring. Users can easily archive their discs to their NAS and write image and video files to disc using DVDFab on their TVS-882BRT3 without needing a separate computer.

As Apple® computers do not natively support 10 Gigabit Ethernet, Mac® users previously needed to purchase a Thunderbolt-to-Ethernet adapter to connect to high-speed Ethernet networks. The innovative Thunderbolt-to-Ethernet (T2E) allows computers without Ethernet ports (such as MacBook Pro®) to access 10GbE network resources over a Thunderbolt™ connection to the TVS-882BRT3. This saves users from having to buy adapters or converters and greatly streamlines the connectivity process. 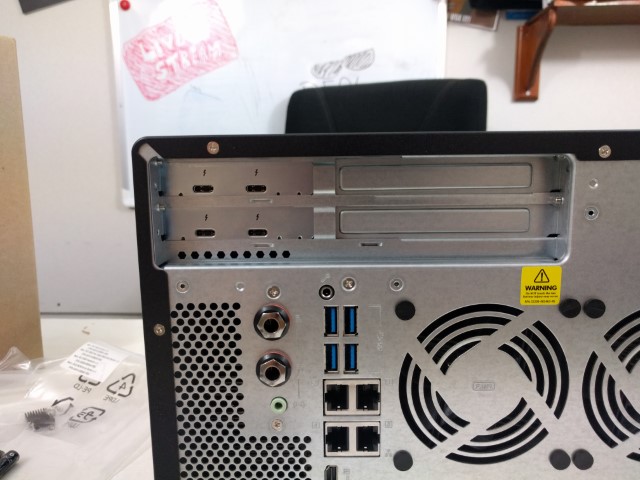 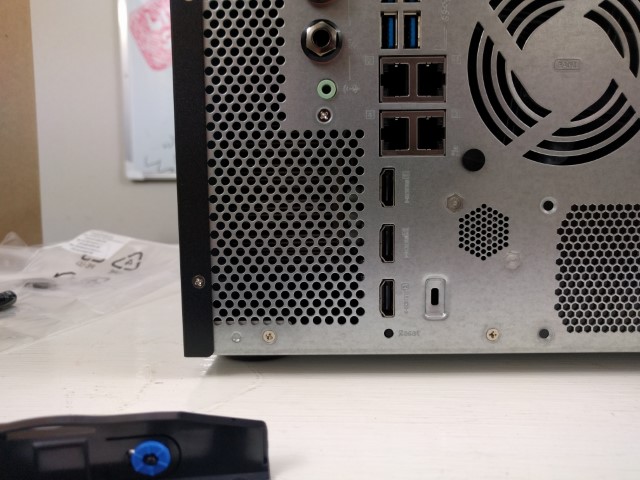 From playing music, to viewing surveillance feeds in Surveillance Station, to shutting down or restarting the NAS, everyday and common tasks can be just a button press away with QButton.

The TVS-882BRT3 supports QVR Pro (Beta) that integrates QNAP’s professional QVR system into the QTS operating system. You can arrange a dedicated, independent storage space for surveillance data on the NAS and leverage the advantages of scalability and storage manageability from QTS. QVR Pro features a flexible monitoring interface that allows adjusting the proportion and monitor view of IP cameras, supports an upgraded timeline feature that provides instant video search and quick view identification in live monitoring mode, and allows for monitoring views and playing back images without switching between windows.

Additional functions like batch adding and editing cameras and searching for cameras across different LANs further save the cost and time in deploying and maintaining a complete surveillance system. With the new QUSBCam2 App, USB cameras can be used as ONVIF network cameras. Simply connect it to your TVS-882BRT3, and you can view real-time footage without installing any software. 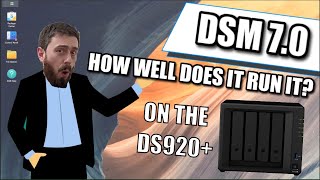