Choosing between the Synology DS918+ and DS916+ NAS for your Data

Synology NAS is probably one of the biggest names in the industry. Providing hardware for home and business users alike, they have been known for their user-friendly software design, sleek modern chassis and accessibility to anyone with even the smallest amount of IT Experience. Last spring we saw the release of one of the most ground breaking 4-Bay NAS devices of recent years in the form of the expandable and powerful (yet affordable) Synology DS916+. It was a 4 Hard drive / Solid State Drive Desktop NAS device that could be expanded with the DX513 Expansion device, as well as providing more than enough hardware and software power to really make a mark for home and SMB users to throw their money over the counter.

Fast forward to October 2017 and we have seen the release of the  4-Bay NAS, the DS918+. This new unit promises to do everything the older DS916+ can do, and more. But does it deliver? If you own the DS916+ NAS, is it worth upgrading? If you don’t and are trying to choose between the DS916+ or DS918+, which one should you buy? Whichever Synology NAS you choose, rest assured that you are buying one of the most capable and adaptable network attached storage devices available. Either one will provide:

What is included when you buy the DS916+ Synology NAS? 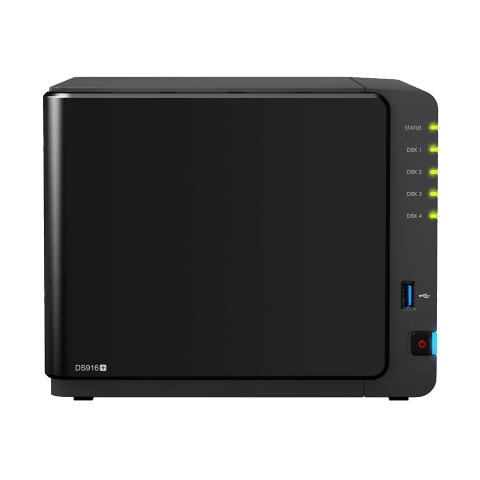 As mentioned, the Synology DS916+ was released in Spring of 2016 and was very well received. It featured an impressive Quad Core Intel Pentium processor at 1.6GHz that could be burst up to 2.56GHz when needed. Alongside this the unit arrived in two different memory configurations, 2GB and 8GB of DDR3 Memory. This level of hardware coupled with the ever evolving DSM 6.1 (6.2 in beta soon) system software mean that it is able to perform most tasks that you throw at it. Over the last 12 months we have seen it used more and more as a business NAS for those looking to centralise all there files and integrate with their CRM or CMS.

Also it has become a very attractive NAS for those in the Photo and Video industry as a means of a single storage device for backing up, editing and sharing personal and professional images. Though the NAS is sold without Hard Drives installed, it is very easy to populate and arrives with almost every other component you will need to set up your Synology DS916+ NAS. Click below to watch our unboxing video from much earlier in 2016.

What is included when you buy the Synology DS918+ NAS?

The arrival of the DS918+ NAS, coming just over 15 months after the DS916+ is something of a change of scene for Synology in a number of ways. For a start the change in chassis design a welcome change. Many found the non-lockable trays and removable front panel a little clumsy. It was never a deal breaker, but it was certainly considered a bit of an unecessary device move. The new DS918+ arrives in a brand new chassis from Synology that adopts the traditionally preferred lockable, hot swap HDD trays, with improved ventilation on all sides of the device.

Though it is when we delve inside the DS918+ NAS that we really see the big changes that 15 months release difference have made. Let’s start with the obvious change – that CPU and Memory. The new 4-Bay still features an Intel processor, however instead of a Pentium, it is a Intel Celeron J3455 Quad Core CPU. The Intel J series has really made a name for itself as the home and SMB NAS CPU of choice (already featured on numerous new Synology and QNAP NAS systems). This CPU features a 1.5Ghz frequency that can burst up to 2.3 GHz on each core. This is further improved with DDR3L memory at 4GB. This is twice that of the base 2GB DS918+ NAS and is DDR3L, rather than DDR3. This means it will hit the same speed in Mhz, but with a lower power consumption and low temperature. Numerous options are open to you with this CPU, many such as AES-NI hardware encryption, transcoding, excellent Plex support and more are available with either this CPU or the Pentium in the DS916+. However this new CPU provides improved efficiency and will hit those targets much earlier than with less power consumed than that of the DS916+. Also the new CPU support dual channel 4K (two 4k files), where as the DS916+ only supports just the one channel. Finally CPU benchmark rated both of the processors in these devices and scored the Celeron J3455 much higher.

The Synology DS918+ and the NVMe SSD Caching – Gimmick or innovation?

The biggest and most highlighted difference between the DS916+ and DS918+ is the inclusion of two NVMe m.2 SSD slots inside the device. SSD caching is not new and serves as an important and cost-effective way to provide increased performance to your NAS or indeed any computer. It provides support to the CPU and RAM in a big, big way and can be assigned as read only or read and write cache (the latter often needing two SSD modules). The thing that makes the SSD caching on the DS918+ so different is the NVMe part. NVMe is a PCI express connection that is twice that of SATA (the connection of most normal HDD and SSD) – this means that not only will you have the SSD caching option, but you have it at TWICE the speed of almost ANY NAS from Synology, QNAP, Drobo and more. To my knowledge, the DS918+ is the only NAS available that arrives with NVMe SSD slots included by default – other NAS servers arrive with it as either an optional upgrade at £150-200+ extra or as just normal SATA M.2. This is a big, big step up from a company that has traditionally been associated with software over hardware. I would almost go as far as to say that this feature almost single-handedly wins the comparison between the DS916+ and DS918+ NAS.

Ultimately it will come down to the extent you wish to push your NAS and the tasks you have in mind. But my recommendation is the DS918+ NAS, as it just gives you more for your money in terms of ability and future proofing. Check out my video below:

Below are the specifications of both the DS918+ and DS916+ NAS.  Don’t agree with my conclusion? Take a look below and then why not let me know what you think.

Join 1,411 other subscribers
Get an alert every time something gets added to this specific article!