Despite the fact that NAS technology is very much on the top of its game in 2020/2021, is has to be said that the developments in top tier fast media as still not being fully used in NAS server environments. HDDs are getting bigger (18TB and 20TB in the works) and SATA SSDs are now embraced in the majority of systems, but NVMe based SSD seems to be getting faster by the day and we have not seen any of the most popular NAS brands jump on board with this – TILL NOW.QNAP has just revealed the new NVMe ONLY Flash server rackmount NAS, the TS-h2490FU, and it is quite the powerhouse of a device. Arriving with 24 bays, a completely new and industry-unique CPU in the 2nd generation AMD EPYC series of processors, up to a staggering 4TB of memory, 25Gbe ports and the raw storage utilization of NVMe U.2 (PCIe Gen 3 x4) over 32Gb/s of dedicated bandwidth each, this is an absolute BEAST. Designed with flash storage in mind, with operations hitting speeds of 14,028 MB/s Read and 10,582 MB/s write, this ZFS equipped device also features the inline data deduplication and compression that will improve bandwidth efficiency, space utilization and (especially important with flash use) durability long term. This along with a whole bunch of QNAP specific features and services in QuTS hero make this a very complete and very fast solution. Let’s find out more about the QNAP TS-h2490FU Rackmount NAS server.

What is the Big Deal about an NVMe SSD Only Rackmount NAS?

Before we go any further though on the TS-h2490FU QNAP NAS, we should probably address the subject of flash storage and why it is currently a thing. Most people know that when you buy any kind of storage server, once you introduce multiple media drives, systems can harness the multiple read and multiple write actions to provide an overall faster and higher bandwidths to a connected network. However, traditional hard drives do this with a certain number of concessions, such as an overall lower performance speed compared with SSD due to their moving parts. Likewise, the individual operations at any given second are considerably lower on a hard drive due to the mechanical need for internal platters to be read rotationally. This is chiefly one of the biggest advantages of SSD vs hard drives, as SSD is not mechanical in nature and both data can be read fast and in multiplicity across the whole disk via multiple operations any second. These much higher speed and performance are the core reason for the utilization of flash storage, but flashstation is a little bit more than that. If you open up a standard solid-state drive, inside you’ll find several components. You find a controller (managing the access), an area of memory (typically known as SDRAM) and multiple modules of storage that comprise the overall capacity of the SSD (cells). Does this sound familiar?

Yes, that is because it sounds a whole lot like a NAS – with its CPU to control the device, its memory to handle processors and multiple storage modules in the form of drives in a RAID. In short, a flashstation server acts as a giant SSD, with individual SSD acting as the individual NAND found within a solid-state drive. The result of this is that a flash server can provide both performance speed and IOPS that genuinely will never be achieved in a traditional NAS server at this scale. This goes way beyond simple file handling and editing, and more into the realm of AI algorithms, physics engines and lightning-fast computer processes, way above the speed of that found elsewhere. The theory behind flash storage has been around for a long time, we have just been waiting for the rest of the technology behind both its construction and its utilization to catch up. The QNAP TS-h2490FU flash server takes all of this and then goes one step further by the utilization of NVMe (U.2) storage media, which is SIGNIFICANTLY faster than traditional SATA SSD. Indeed, each NVMe U.2 slot in the 24-Bay TS-h2490FU features PCIe Gen 3×4 and 32GB/s of bandwidth to deliver data. Feed that into one or more RAID configurations and you are looking at megabyte transmission in the 10s of thousands per second.

What are the Hardware Specifications of the QNAP TS-h2490FU Rackmount Flash NAS?

As mentioned, the hardware featured in the TS-h2490FU QNAP is some of the most powerful I have ever seen in a NAS, as well as being one of the first solutions from the brand that I have seen that arrives with 25Gbe as standard. Below is the hardware highlights of the QNAP TS-h2490FU Flash Server NAS: 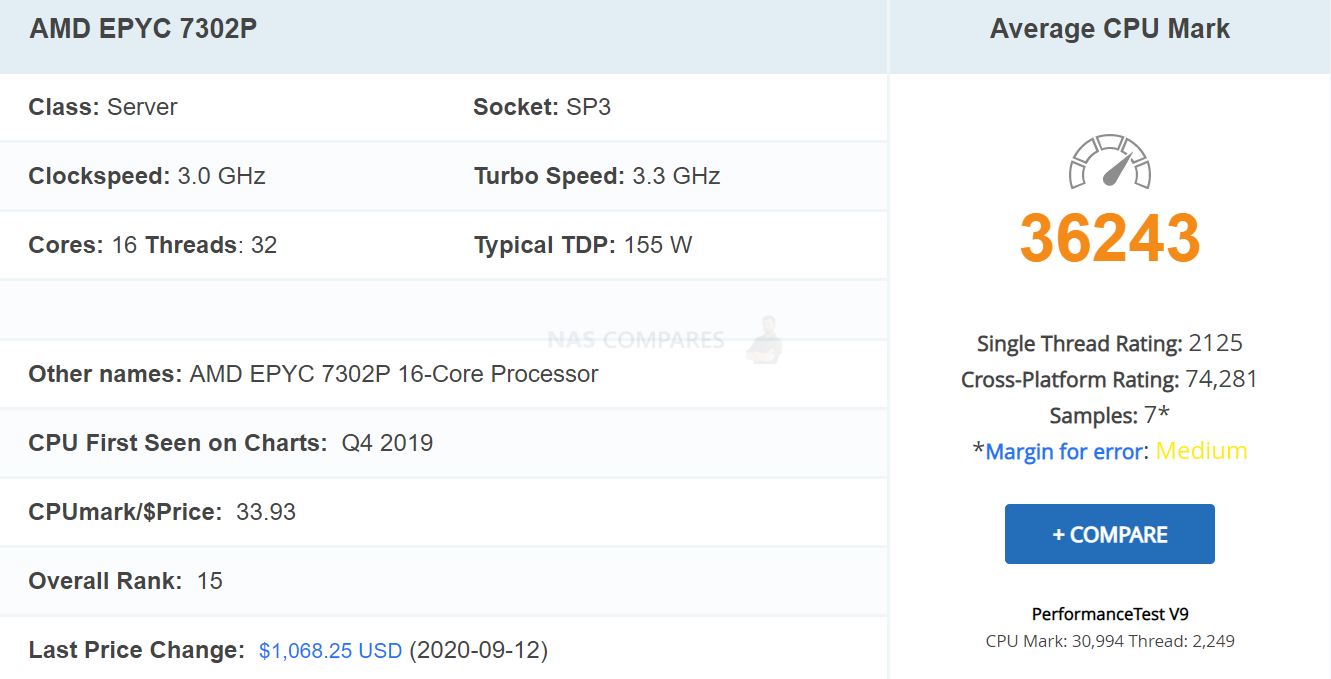 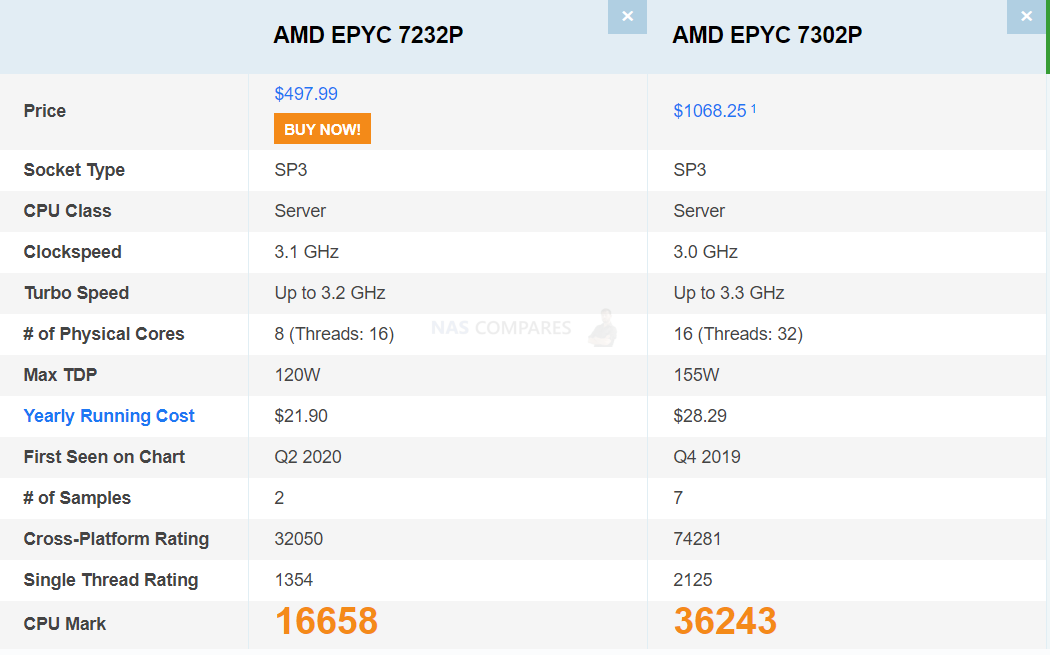 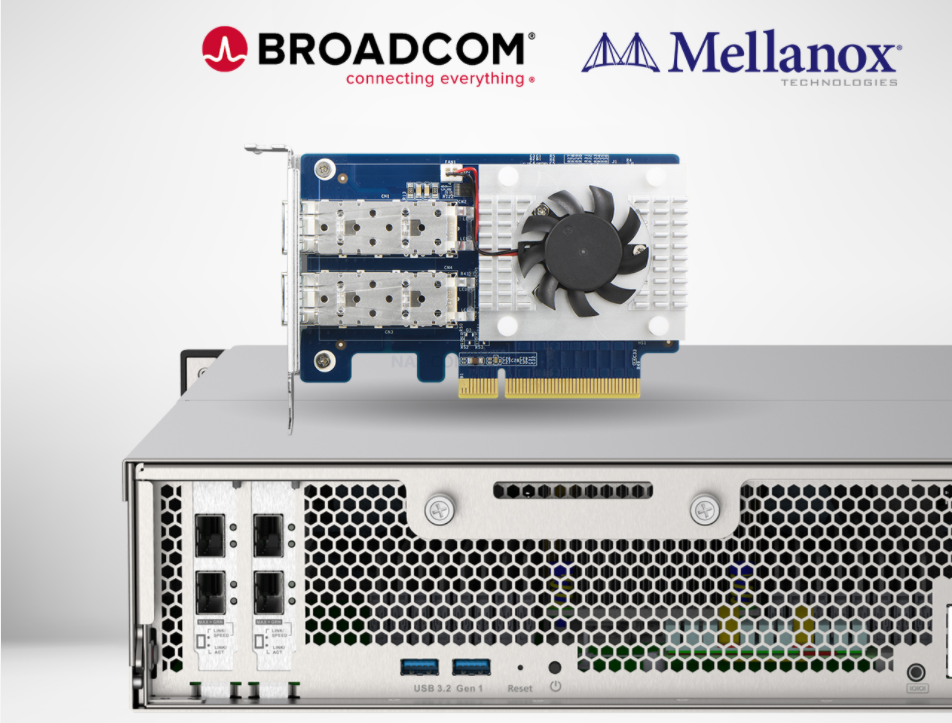 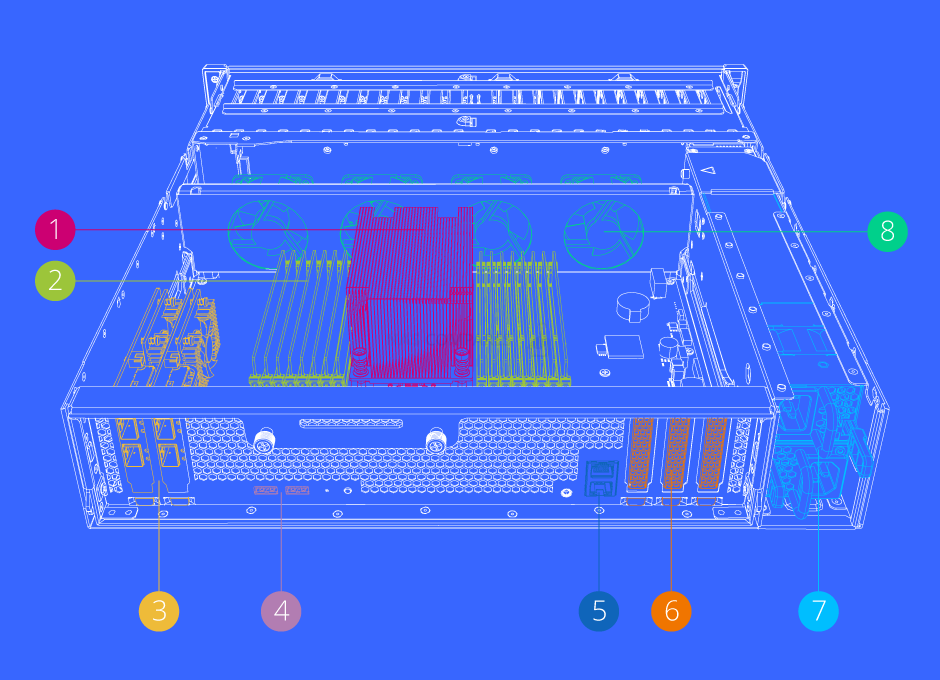 Finally, the QNAP TS-h2490FU is backed by a 5-year warranty as standard.


What are the Software Specifications of the QNAP TS-h2490FU NAS?

The software found with the QNAP TS-h2490FU NAS can be broken down into 2 sections. namely those of the advantages that QNAP QTS already bring to a business user, and then the widespread system and storage advantages that QTS hero and ZFS bring as well. For those unfamiliar with the QNAP operating system, it arrives with hundreds of free applications, can be accessed from a web browser or desktop client, arrives with many, many apps for mobile on IOS and Android and is definitely in the top two operating systems you can get for network-attached storage devices. Often compared with their biggest rival Synology NAS and DSM, QNAP QTS GUI is designed in a way that will definitely appeal more to Android and Windows users, giving you everything you will need from a network-attached storage device in 2020 and arrives with constant updates for added features and security. 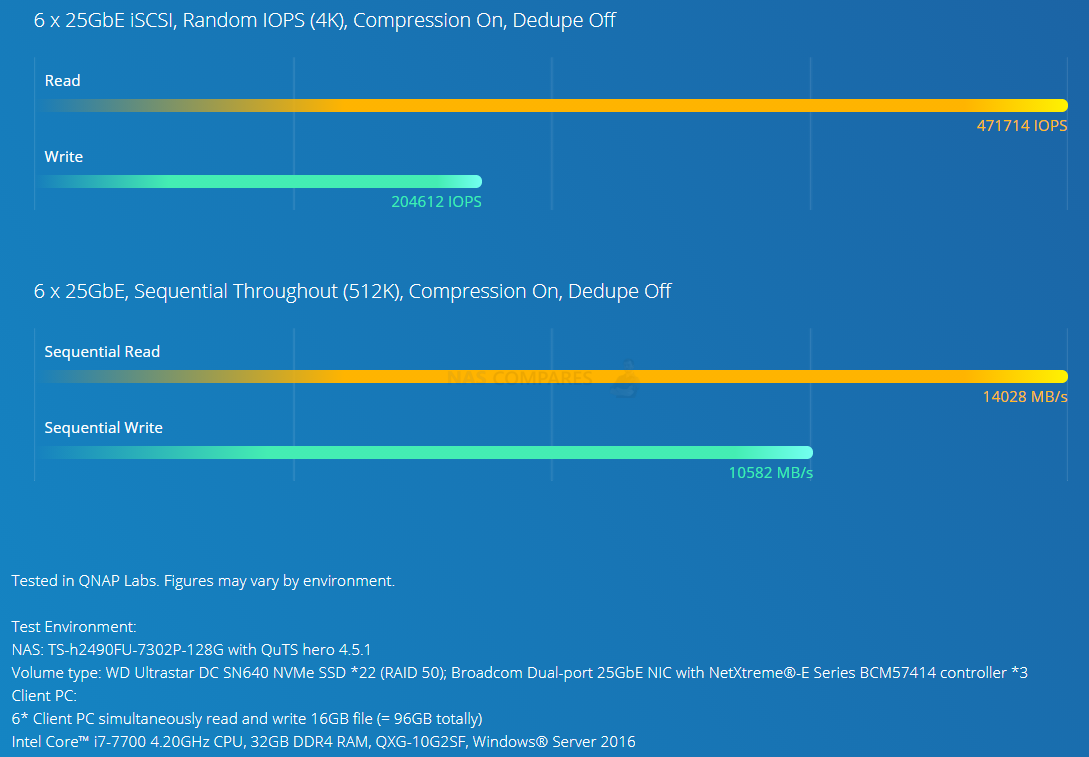 
Then you have KEY applications that are used on the QNAPNAS system that moves into tailored data access and use, such as:

Above are a few of my software overviews that cover the general GUI and system of QuTS Hero on the TS-h886, as well as RAID rebuild and storage management overviews of the system to give you some idea of what the TVS-x88X can and cannot do:

App Center – Apps for backup/sync, virtual machines/containers, content management, productivity, and more features can be used to expand the application potential of the TS-h2490FU. 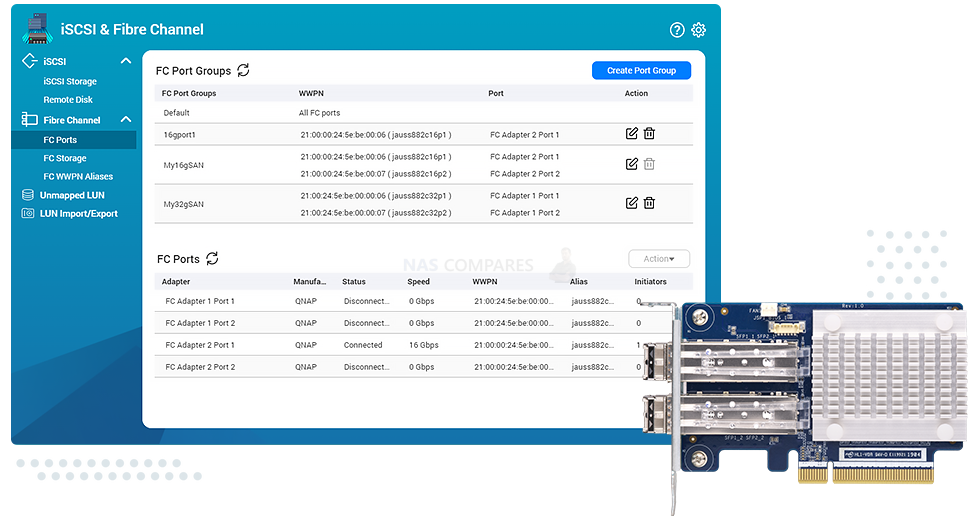 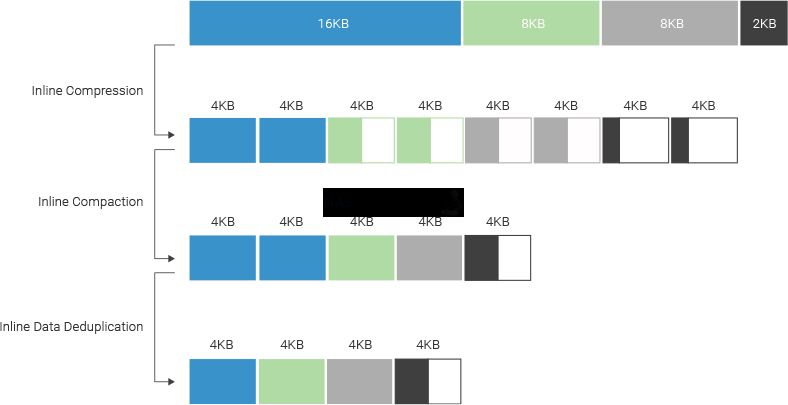 Whether acting as primary or backup storage, the TS-h2490FU optimizes storage utilization to provide a reliable storage cornerstone in the Big Data era. All-flash solutions thus achieve higher cost efficiency while improving both random write performance and SSD lifespan. Along with numerous methods of data backup, synchronization, snapshot and recovery, there are several SSD specific handling technologies built into the QNAPTS-h2490FU.

Dedicated space can be flexibly reserved in an SSD storage pool to allow new data to be written into a complete block even if the pool is almost full, thus improving the performance of fragmented pools.

Allows QuTS hero to inform SSDs to delete unneeded data blocks and process the deletion tasks during system idle times, meaning it does not have to wait for when new data is written to the block.

As you can imagine, the QNAP TS-h2490FU is a fantastically enterprise-level solution and not only with command an exceptionally high price tag (likely in the 5 figures) but will also be rather specialist, so expect it to be in small physical quantities and practically made-to-order. As I learn more about this, I will let you guys know and update the pages!