I have said it before and I will say it again, QNAP is the brand that you should look at when it comes to pushing innovation in the NAS industry. They were the first to introduce Thunderbolt NAS, fully-featured HDMI 2.0, DAS like connectivity into NAS over USB and more. However, the next TS-h973AX NAS that I want to discuss today is very much QNAP in their element. Using the triple-tier storage system that they have been refining year on year since 2017 across numerous product families, it arrives with three very different storage media bays, spread across 9 Bays (5+2+2), AMD Ryzen architecture, huge external connectivity options and even the ZFS file system. That last point will be of particular interest, given that some of the core caching, compression and storage tiering advantages of ZFS will be greatly enhanced by the hardware architecture on offer here. So, today I want to talk about the newly revealed desktop 5+ Bay NAS device from QNAP and help you decide if this server deserves your data. 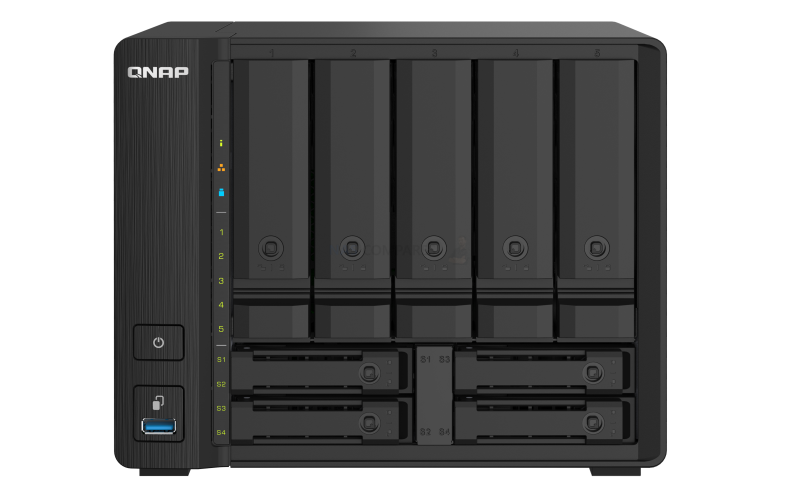 As already highlighted, the QNAP TS-h973AX arrives with a unique 3 tier storage system that allows you to take advantage of the benefits of each tier either in an intelligent system managed storage system (with tiers that handle different files types as their priority demands automatically). The first tier is the five SATA 3.5″ HDD (and SSD if you like) bays, supporting up to the latest 16TB and 18TB NAS hard drives from Seagate Ironwolf and WD Red. The 2nd Tier is two 2.5″ SATA SSD Bays that support up to the latest 4TB and 8TB solid-state drives. Finally, there are the (very unique for a product at this level) two U.2 NVMe SSD bays that can support huge capacity, super-fast SSDs from Intel, Samsung, Seagate and WD. Using the tiering, compression and caching options available in QuTS Hero, you have a system here that will seemingly get the very, VERY best internal performance internal that the storage can provide.

Alongside this, the TS-h972AX also arrives with the AMD Ryzen based V1500B quad-core processor, which is a 64bit x86 architecture processor that, although not featuring embedded graphics, DOES support all of those applications that need a good calibre processor (Surveillance with QVR Pro, Virtual Machine deployment in Virtualization Station, Ubuntu VMs in Linux Station and more). Finally, along with these great internal hardware confirmed specs, there is the external ports and connections. I am pleased to confirm that the TS-h972AX arrives with 1x 10GBASE-T (copper) 10Gbe AND 2x 2.5Gbe ports. So, a total network communication of 15Gb/s (1,500MB/s+) potential across transfers and connections. Below is a summary of all the specifications we know: 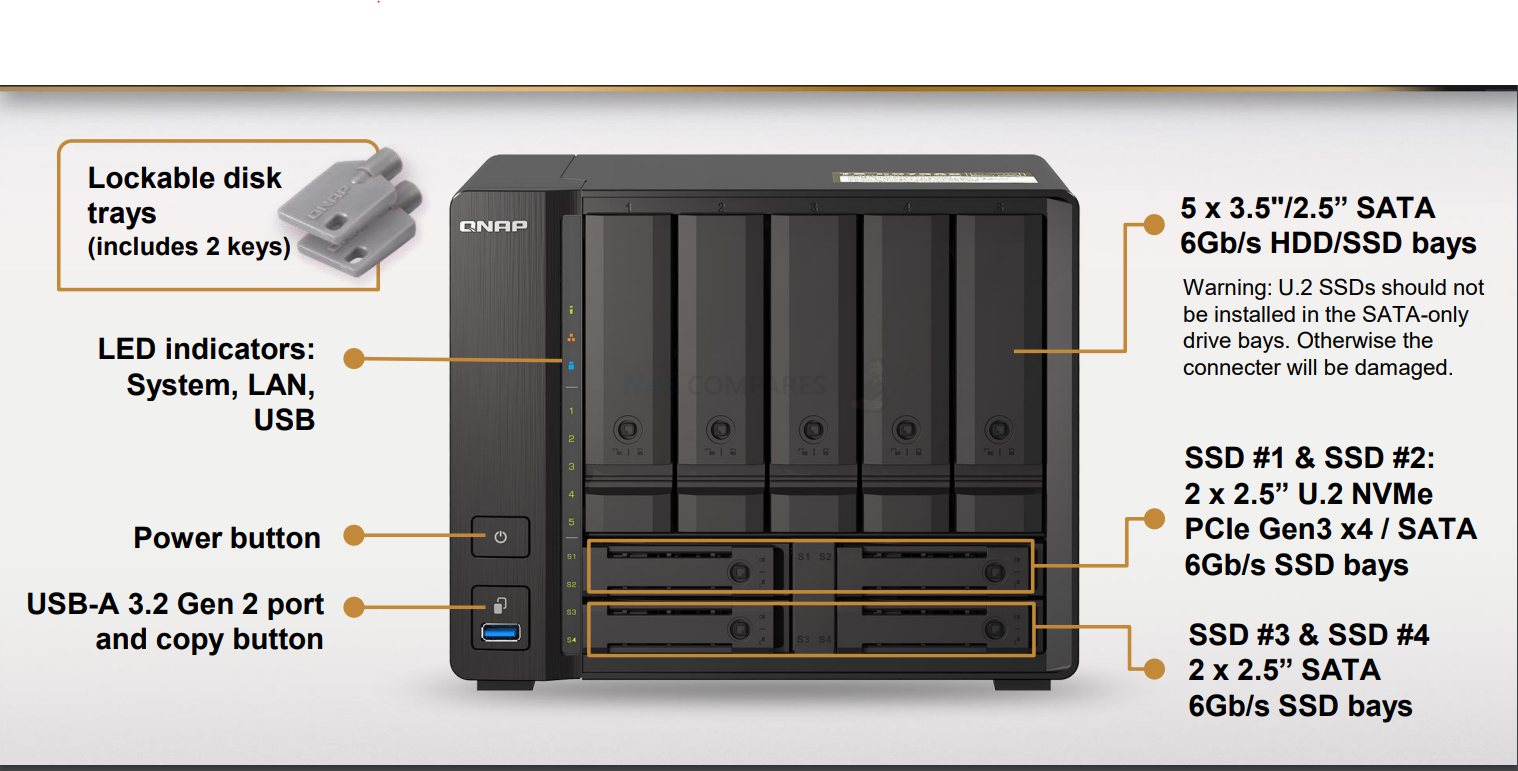 It’s a very interesting and impressive hardware setup for such a compact device at 182.7 × 224.7 × 223.6mm and could be the most well equipped (in terms of storage) 5 HDD NAS I have ever seen. I am looking forward to seeing how the system can leverage the capacity/IOPS/Performance/price-per-TB of each storage tier against one another. Also, although U.2 NVMe SSDs (over generations using a SAS/MULTI SAS interface) may seem a rather ‘out of reach’ interface for many small/medium business users, it’s actually quite simple to use traditional NVMe SSDs inside this device, using the £60 QNAP QDA-UMP NVMe-to-U.2 adapter.

This allows you to still use PCIe Gen 3×4 NVMes, install them in the heatsink chassis and then install 1-2 in the TS-h973AX easily. Remember, this NAS does NOT force you to use the two SSD layers only for caching, and you can create a complete storage pool and volume on each media tier, which is something that video editors wanting to edit over 10Gbe on those U.2 will appreciate, allowing the SATA SSD for raw Photo editing over 2.5/5Gbe and finally the HDDs are there to run as archive storage. You can use numerous programs in the QNAP QuTS Hero app centre to create the perfect, bespoke multi-tiered backup solution that includes NAS, Cloud, USB and more.

The software found with the QNAP TS-h972AX NAS can be broken down into 2 sections. namely those of the advantages that QNAP QTS already bring to a business user, and then the widespread system and storage advantages that QTS hero and ZFS bring as well. For those unfamiliar with the QNAP operating system, it arrives with hundreds of free applications, can be accessed from a web browser or desktop client, arrives with many, many apps for mobile on IOS and Android and is definitely in the top two operating systems you can get for network-attached storage devices. Often compared with their biggest rival Synology NAS and DSM, QNAP QTS GUI is designed in a way that will definitely appeal more to Android and Windows users, giving you everything you will need from a network-attached storage device in 2020 and arrives with constant updates for added features and security.

Then you have KEY applications that are used on the QNAPNAS system that moves into tailored data access and use, such as:

Above are a few of my software overviews that cover the general GUI and system of QuTS Hero on the TS-h886, as well as RAID rebuild and storage management overviews of the system to give you some idea of what the TVS-x88X can and cannot do:

App Center – Apps for backup/sync, virtual machines/containers, content management, productivity, and more features can be used to expand the application potential of the TS-h972AX.

Details about pricing and worldwide release are a little thinner on the ground. The QNAP 73AX and 73AU ranges have slowly been releasing/to-be-released towards the end of 2020, but the TS-h973AX is quite different from those, as although it DOES have the same CPU architecture, the surrounding triple tier media support, external bandwidth and ZFS QuTS Hero support are something that only this device arrives with. I think we will likely see this right at the tail end of 2020, but can imagine stock will be limited in the early stages. For those of you that have been looking at modern NAS solutions in 2020 (and towards 2021 of course) that provide a solid even split between storage, power and speed, I can imagine the QNAP TS-h973AX ticks a whole lot of boxes for you, so I would recommend pre-ordering if this seems like a good solution for your business needs. Regarding price, that’s a whole lot tricker. Previous generations of the 5HDD+4SSD combo from QNAP (eg the TVS-951X, TS-963N and TS-932X) have always arrived at a price point around 100-150 more than their general 4-Bay HDD Only counterparts. However in the TS-h973AX, we find a huge amount of unique features and hardware (ZFS, U.2, 10G, etc) that is leaps above the likes of the TS-x73AU series (generally starting around £750+ ex.VAT). Likely you are looking at £1000-1100, but even then, this is a large amount of guesswork and likely does not include your local tax.