Great news for anyone who has been waiting the long, LONG time that has passed since Synology released a follow up to the formidable DS3617xs NAS back in 2016/2017, with the reveal of the long-awaited DS3622xs+ NAS. A 12-Bay Desktop NAS system that arrives with a whole bunch of hardware, bandwidth and quality of life improvements over its predecessor. Alongside the reveal, there is also information on the brand new DS2422+ NAS, a follow up to the DS2419+ and another solid entry into the Embedded Ryzen processor series that Synology has been slowly releasing over the last 12 months or so. Of the who, clearly the DS3622xs+ is the one that will garner the most attention, given the huge popularity of the older DS3617xs to Prosumers and Business users alike. These new releases appear to be slated for relatively soon (given their appearance online at a few eastern releasers, compatibility lists and more, so let’s take a good look at the DS3622xs+ and DS2422+ NAS and see what we think, how they measure against their predecessors and see if they deserve your data? 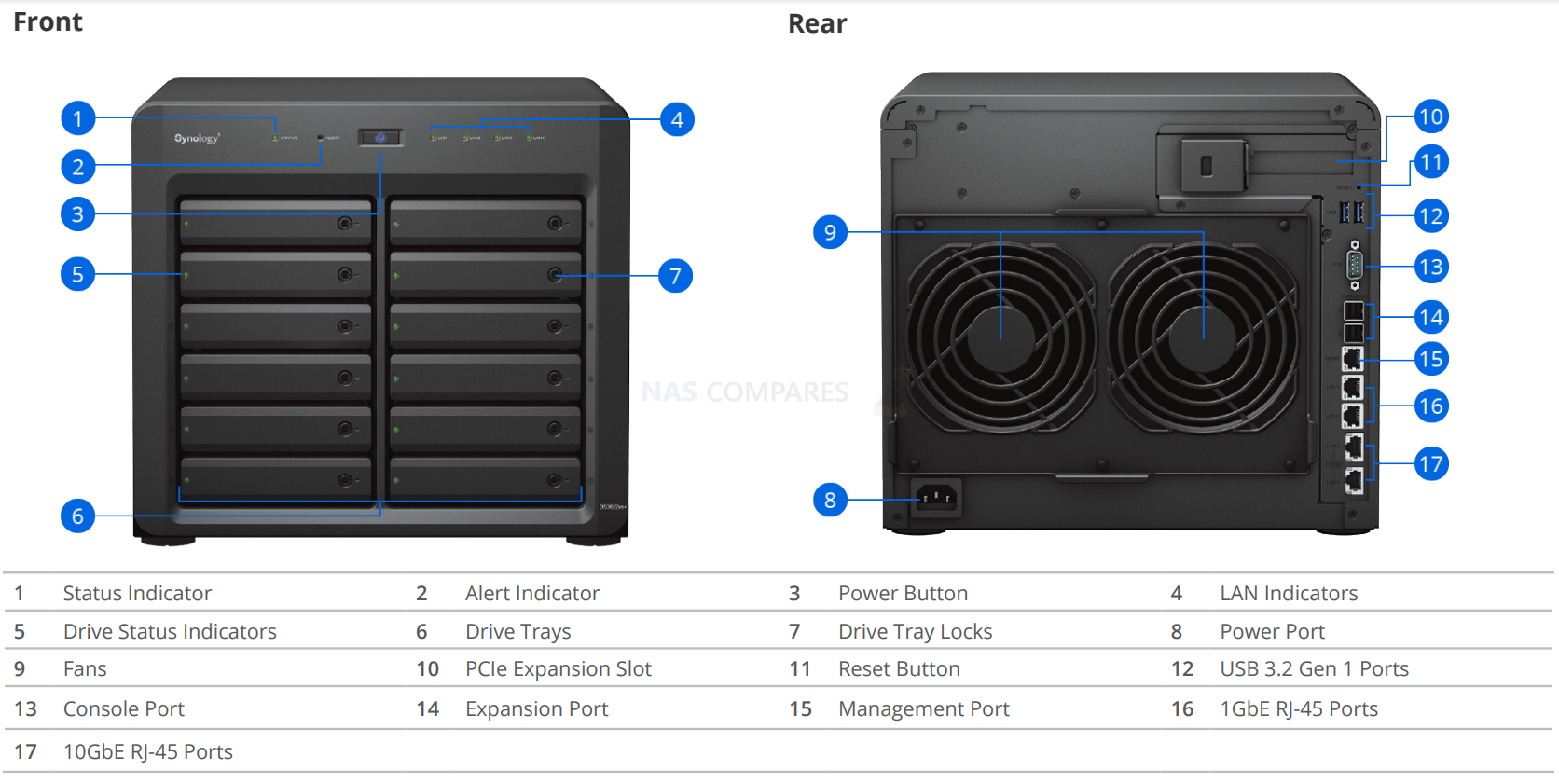 What are the Hardware Specifications of the Synology DS3622xs+ NAS?

The Synology DS3622xs+ is a fairly substantial upgrade to the DS3617xs in quite a few key ways. For a start, the previous generation arrived with a quad-core Intel Xeon D-1527, which although good is now showing its age a little, whereas the DS3622xs+ arrives with a more modern 6 Core Intel Xeon D-1531. Here is how these two CPUs compare (thanks to CPU World): 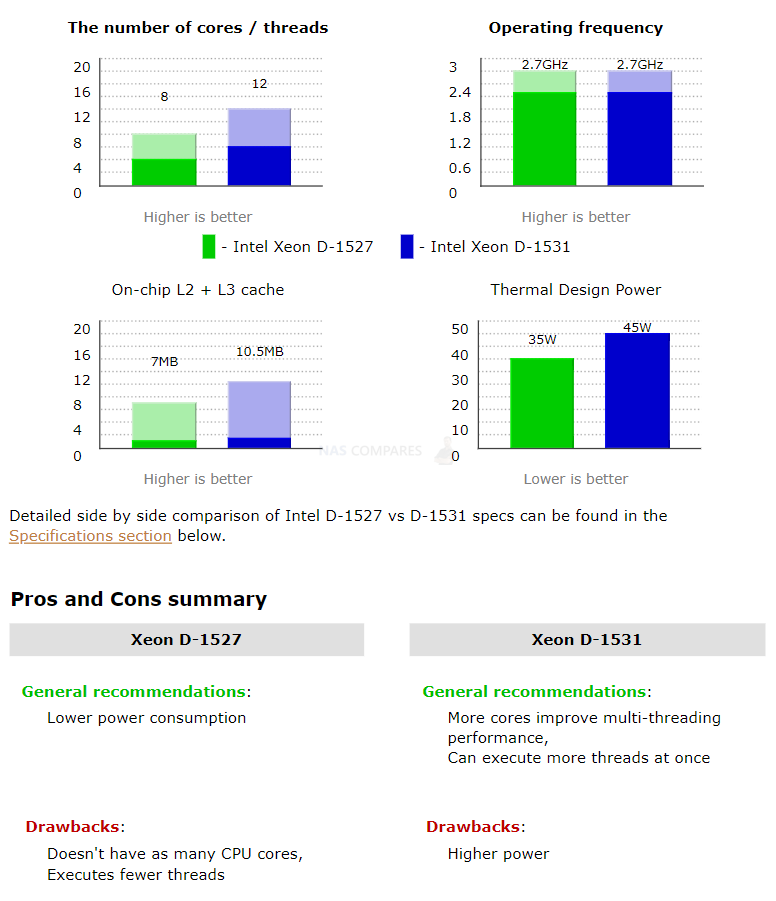 Although it might not seem like a vast improvement in tech specs, you will always find that server processors are quite comparable for the most part in baseline specifications. Additionally, for the most part the XS and XS+ series from Synology (with a few exceptions from back in 2011/12) have always arrived with an Intel Xeon based Processor, so this is a reasonable processor upgrade for a product series refresh. The other big difference between the DS3617xs and DS3622xs+ (and how it earns that ‘+’ is that the DS3622xs+ arrives with two 10GbE ports onboard. This is very, VERY welcome as the throughput potential of those 12 SATA bays is almost certainly going to massively saturate that potential 20GbE of connectivity. Most of the traditional hardware elements on the DS3622xs+ are similar to its predecessor, with the unit arriving with a PCIe slot (PCIe Gen 3 x8), support of two 12-Bay expansions (this new generation also arrives with a new DX1222 expansion chassis choice – more on that soon). Finally, the system utilizes DDR4 ECC memory, arriving with 16GB by default that can be upgraded to 48GB maximum. Full specifications are below:

So, clear improvements with the inclusion of the twin 10GbE and improved CPU architecture. Additionally, it has been confirmed that the DS3622xs+ will only support the use of Synology official Hard drives and SSD (such as the HAT5300). 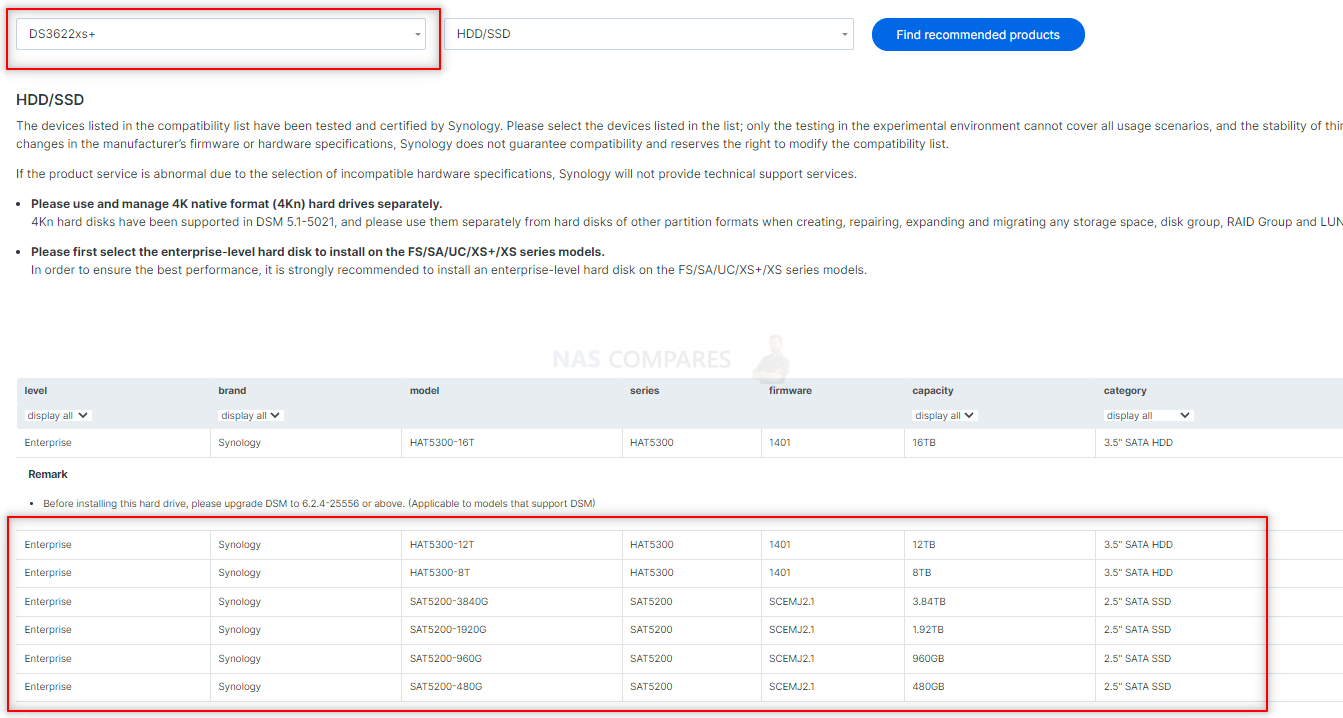 What are the Synology DS2422+ NAS Hardware Specifications?

The Synology DS2422+ NAS is a follow up to the Mid-2018 Released DS2419+ and is far more comparable to the DS1821+ and DS1621+ NAS drives. This new 12-Bay for SMB users arrives with similar architecture it’s predecessor, but takes advantage of that new Embedded Ryzen V1500B processor, as well as 4GB of DDR4 ECC SODIMM memory (that can be upgraded to a maximum 32GB). The rest is quite similar and includes 4x 1GbE LAN ports, a PCIe Gen 3 upgrade slot for adding cache cards/network upgrades, a mini-SAS HD expansion slot for attaching the DX1222 and two USB 3.2 Gen 1 Ports (5Gb/s). Below is the full specifications we know so far:

So, arguably a less flashy release than the DS3622xs+, but still a decent upgrade o nthe Intel Atom-powered DS2419+ that came before it. One thing that did stand out though is that, much like the DS3622xs+, the DS2422+ only listed the Synology range of storage media on its website for compatible hard drives (see below). This will come as a bit of a blow for some and despite the high quality of the HAT5300 series (HAT5300 Review HERE a while ago – Enterprise-Class HDDs at Pro Class Pricing), this is the first desktop Plus series NAS that we have seen that has listed compatibility in this way. 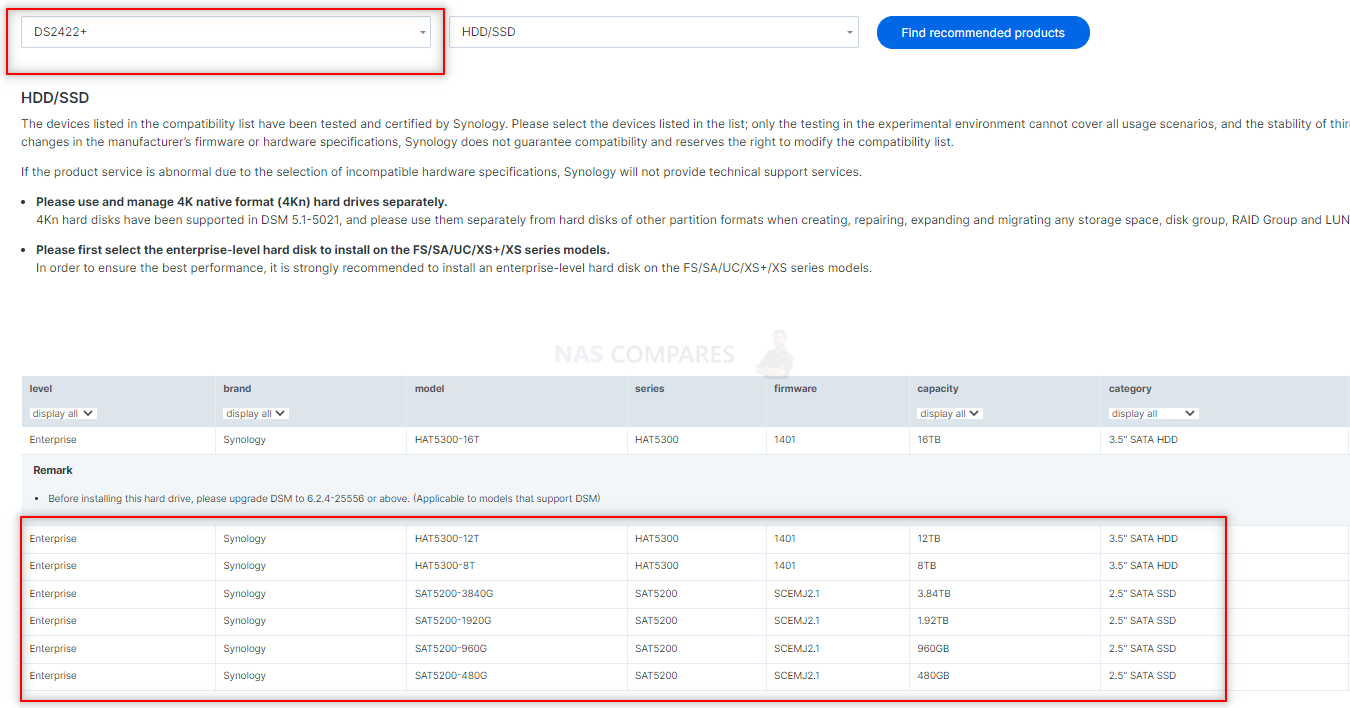 When Do We think the Synology DS3622xs+ and DS2422+ NAS Drives will be Released?

Given the sudden buzz on a number of smaller retailers and the appearance of the data sheets online, I think we can be confident that this will be officially launched quite soon, with full availability shortly after. The units have now been listed on numerous region Synology sites, which typically means that the devices are now ready for launch, with stock availability around 1-2 weeks later.

Pricing for the DS3622xs+ and DS2422+ is one of the things that is still quite unclear online right now (soon to be cleared up I am sure) but I think we can imagine the DS2422+ will arrive at a similar price point to the DS2419+ NAS that came before it. However, the DS3622xs+ is a bigger jump over the DS2617xs (largely thanks to the 10GbE ports included and the extra cored processor), so that is something that we will know more about closer to the official launch. 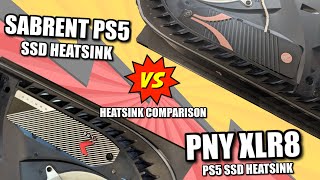