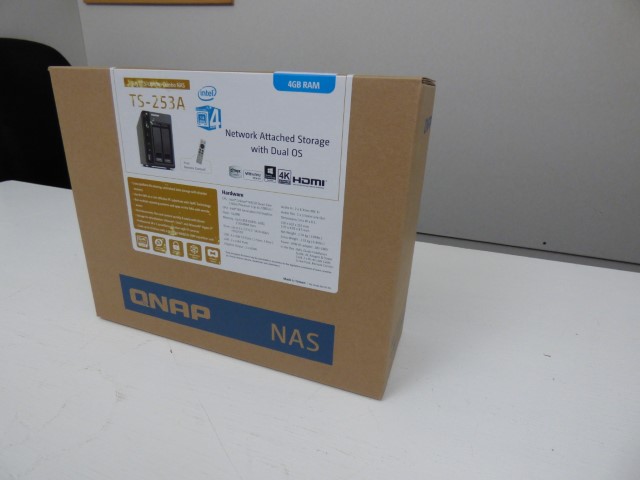 Does the Latest QNAP TS-253A change the landscape of NAS this 2016? 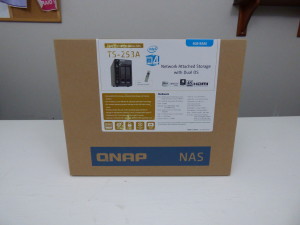 Whether you are new to NAS or a long standing veteran of Network Attached Storage like myself, you will have heard of QNAP NAS. They are easily one of the top two NAS manufacturers available to both home and business users (the other of course being Synology NAS) and they have not disappointed with their latest 2-Bay NAS entry, the QNAP TS-253A-4G. Featuring almost every conceivable requirement for your Network Attached Storage, I have definitely found the 253A to be a real breath of fresh air in the NAS market of late. So let’s start our unboxing of this device and give you a better idea of whether this NAS is right for you.

The look of this QNAP NAS? 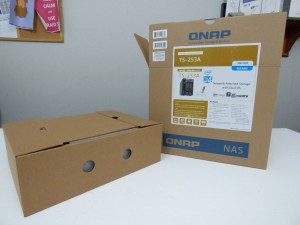 The QNAP TS-253A unit itself has kept the framework chassis of its predecessor, the QNAP TS-253 PRO, but we will talk more on the design of the unit later. For now we can talk about the retail packaging. Now, I appreciate that some people only plan on buying a single NAS and maybe not again for another 3-5 years, but external retail packaging is still important for some and like a good book cover, it can help push a buyer over the edge. The external packaging for the TS253A is (like Synology) one of brown box packaging for the bulk of their 2 Bay range, but with a different sticker to denote the contents. On this occasion it is still an informative stocker that shows you the QNAP 253A and its contents, as well as details about what the unit can do, but it does still seem a little dull. That said, when you open the retail box, it is a very clear and sturdy cardboard frame and everything is clearly divided.

On to what you get for your £250 odd spend. Inside the box you get unit itself, a quick install and start guide, an external PSU (external power suppliers are pretty common for 2 bay NAS devices, as then replacement and temperature problems are neatly avoided), screws for installing Hard Drives into the 2 HDD trays (you can install 3.5” desktop drives as well as 2.5” HDD and SSDs), a remote control for HDMI media and finally 2 gigabit LAN (cat 6) cables. 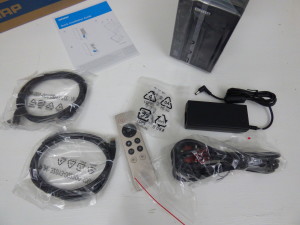 Every item is bagged separately and even the front mounted USB port on the box we will talk about later is covered but protective film (shown). You also have 4 camera Licences for IP cameras in CCTV NAS software ‘Surveillance Station’, but these are included with your cloudKey/Software and not physically present. All in all, what I would expect but I have to give additional points for the extra LAN cable and the remote control – not useful for everyone but nice they included it in the package without increasing the price compared to its previous unit.

Let’s talk about the physicals? What does the TS-253A look like? 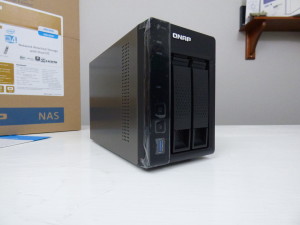 Physically, the unit is very similar to the QNAP TS-253 PRO released almost 2 years before. Those this device is a little more silver in colour and has additional ports (will discuss in a bit). The trays are metal and HDDs require screws. The front of the device features multiple LEDs indicating Drive and system health, as well as a front mounted 1 touch USB 3.0 Copy button and port – very useful indeed and another great little feature of this QNAP NAS.

Lastly there is an additional ventilation section on the side of the device in the metal chassis, as well as ventilation on the trays and around between.

Let’s take a look at the back… 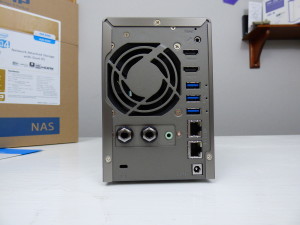 When we turn the device around, we can straight away see a plethora of ports! The first that may stand out for you is the audio ports. In the East where QNAP originate, there is a heavy demand for Karaoke – this isn’t casual xenophobia but a fact and something the boys at QNAP have factored into their NAS with enhanced audio options. Of course you can connect microphones to those audio ports and boot up the QNAP NAS Karaoke software and have fun, but if you aren’t a fan of public humiliation, you can of course us these for more practical purposes in your NAS setup if you utilise those HDMI ports for standalone PC tasks.

Next you can see 3 more USB 3.0 ports (bringing the total to 4x USB 3.0 – no USB 2.0 this time, thank god), 2 Gigabit LAN ports so you have the option of link aggregation to effectively double your read and write transmission speeds and finally you have TWO HDMI ports. Giving you options such as dual display, extended desktop (for standalone PC needs and HD Station apps) and even have two different displays available (not 100% effective and awaiting updates).

A little about what the QNAP TS-253A can do 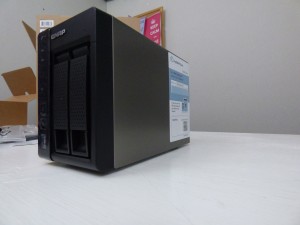 And that is about it for the unboxing of the TS-253A. However there is still a lot to be said for the increases to the abilities of this NAS device over its contemporaries. The QNAP TS-253A ia a 4K and HD transcoding NAS, as well as being suitable as a Plex Media Server, thanks to that x86 Intel Celeron CPU. Additionally the unit arrives with 4GB  of DDR 3 RAM that can be expanded to 8GB easily (over two slots). You can always consider going higher and many have reported success at installing 16GB of DDR3  RAM (2x 8GB) for hosting many, many Virtual Machines (VMs) but QNAP does not endorse this and you do it at your own risk. Aside from generally being a very, very competent NAS at all the things you expect from a top shelf NAS such as Apple Time Machine backup image support, media and iTunes support, large numbers of download tasks, Surveillance NAS use (upto 40x cams) and running multiple virtual machines from the device, another feature that has yet to be fully explored on the TS-253A is the DUAL OS of QTS (the QNAP NAS software) and Ubuntu. It’s not QNAP’s first show of mixing software (two notable examples are the QNAP TAS-168 Dual OS, Android and QTS NAS device, and the other is the TVS-871T Thunderbolt 2 and NAS device) and it will be exciting to see how people utilise this feature above and beyond running a Linux OS system on the device by connecting a mouse and keyboard + HDMI monitor to one of those ports. All in all a very impressive NAS device and I recommend the QNAP TS-253A-4G as one of the Best NAS buys of 2016.

The QNAP TS-253A is available now from SPAN.COM and will cost around £250 to buy without the VAT or hard drives.

If you need NAS Hard Drives, SPAN.COM recommend the WD Red Series or the Seagate NAS range at a capacity of at least 4TB (so you have lots of storage in a RAID 1 or SHR). Thanks for reading.