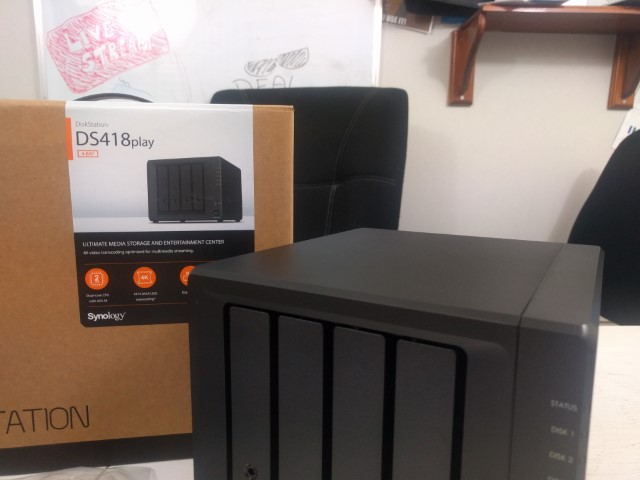 The Synology PLAY series has been around for a number of years now and over that time there have been highs and lows. Many considered the peak of that range to be the 2014 release DS214Pplay, a simple Intel 2-Bay NAS that not only featured a fantastic Price vs Power ratio, but also was one of very few Synology NAS that arrived with an SD Card Slot. Till now the Synology Play series has taken a bit of a stunt in development as so many of the core ‘PLAY’ features that are centred around Multimedia have been largely absorbed into the flagship plus series. Till now the Synology DS416PLAY was the last PLAY series NAS server released and it was met with a rather tepid reaction. It was rendered largely redundant by the DS916+ NAS and as they were released quote close to one another, the idea of spending less than £80 more and getting a NAS that was more than twice the power and ability was just too tempting for many. Now the brand new 2018 Series Synology DS418play has arrived and the big three questions are, is it worth the £420+ price tag, what makes it worthy of the Synology PLAY title, and is it worth buying this or the Synology DS918+? Let’s unbox this NAS. 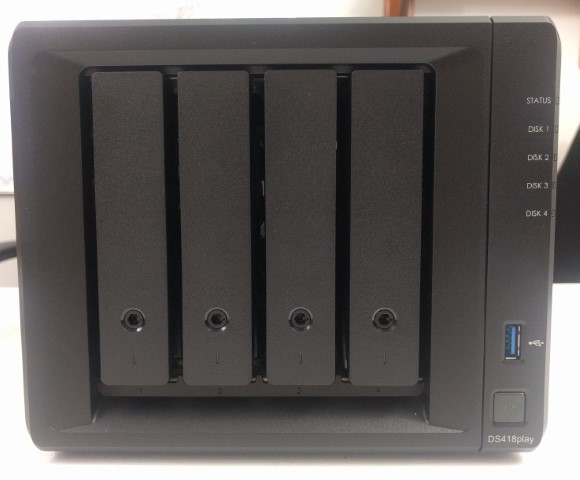 What do you get when you buy the Synology DS418play NAS?

The external packaging of the Synology NAS is pretty standard for Synology. The unit arrives in the Synology retail livery and with product specific stickers than denote the model, the contents, the internal hardware and details on the unit’s capabilities. Once you open up the retail packaging, you find the DS418play NAS unit itself, an external PSU, two RJ45 LAN cables, screws for installing 2.5″ drives (3.5″ can be installed without screws or a screwdriver via the click and load trays than arrive pre-slotted in the DS418play), instruction manual, synology C2 Cloud service trial and of course, a mains power lead. 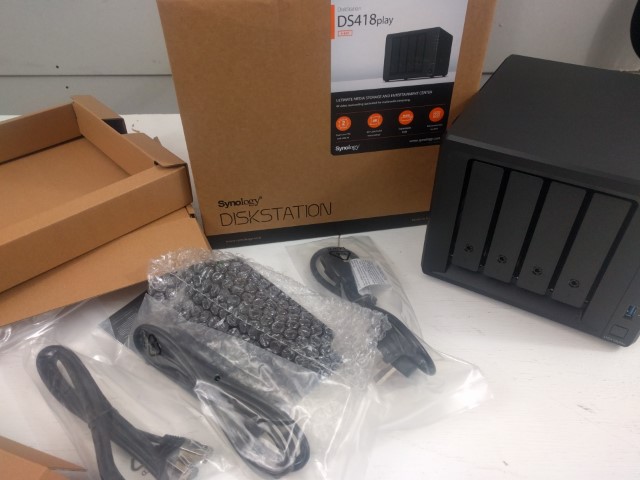 The unit itself when you get it out of the packaging and weirdly soft external bag, is using the brand new 2018 Series 4-Bay Chassis (already featured in the DS418 and DS918+). I have already exclaimed my enthusiasm for this new casing on other articles (additional ventilation, a pinch smaller, no more silly removable front panel, etc) and am pleased to see them adopting it in the DS418play. The trays themselves as mentioned are the click-n-load bays and hotswapping is possible. So you can remove and change drives whilst the unit is in operation, which is useful for those than need the unit constantly up and running, even when a new bigger or replacement drive needs to be introduced. Just make sure to consider your RAID configuration and more when doing so! 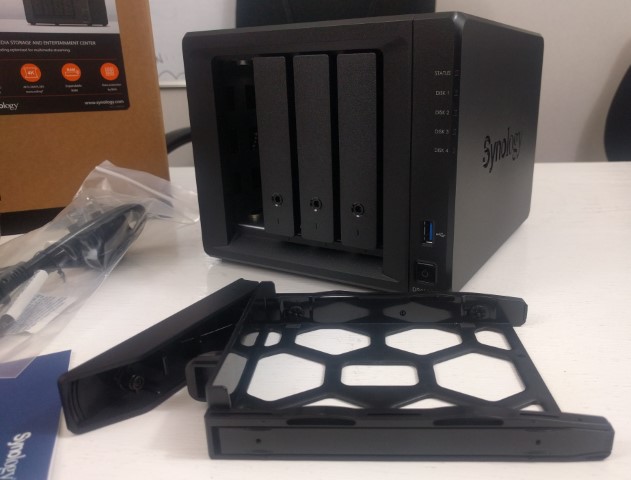 The front of the chassis has multiple LED lights denoting drive health, system access, network access and more and there is a rather well hidden USB 3.0 port on the base at the front. This can be used for connecting a USB Backup drive, compatible peripheral or make a traditionally static and locally based external drive, network accessible. 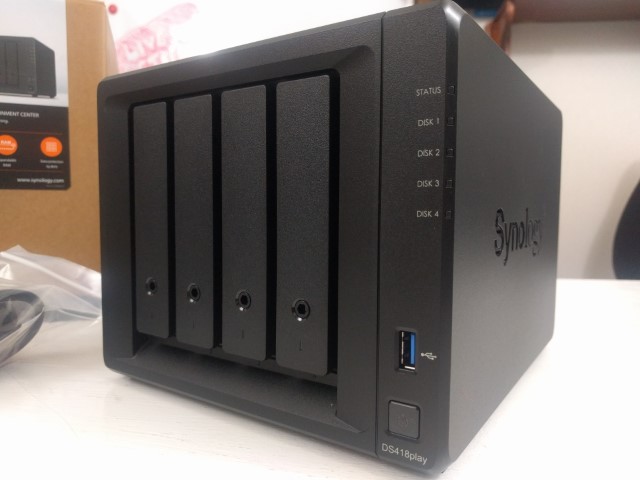 What are the ports and connections of the Synology DS418play?

The sides of the Synology DS418play both feature the Synology Logo, which is rather smartly ventilated – something I have always been rather impressed by. If we look at the rear of the device, we can immediately see two nice features. The first is those two lovely big fans. These are surprisingly quieter in the new chassis than in the previous DS416play case and can be fully controlled to speed up or down as needed. Of course the Synology DS418play has internal temperature detection for both the drives and the CPU, so most fan control is automatic to adjust to how the NAS Is being used, but it is still nice to be able to control if you need them at a lower RPM sometimes to reduce any remaining noise. 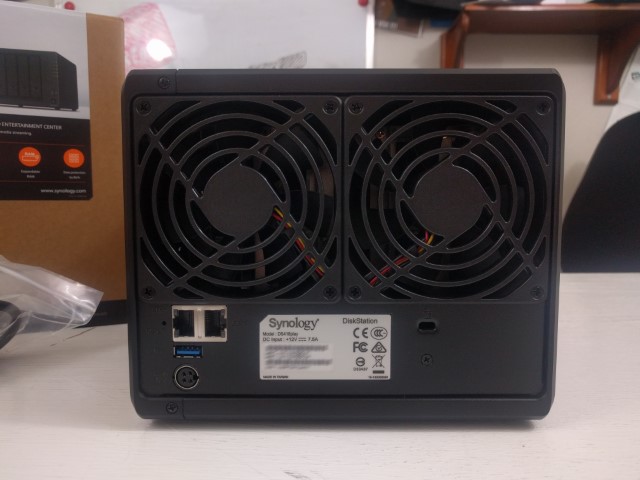 The second feature is the dual LAN ports. the DS418play featured two lAN ports too, but it is still good to see this continue. With media files getting bigger and bigger, as well as 4K becoming increasingly popular, it is nice to see the Synology NAS still including this dual network connectivity. The result (if you have a smart switch or router than supports LAG/Link Aggregation or Port Trunking – it goes by many names) is that uploads and downloads to the device will be improved. of course you will not see this increase on your connected devices unless they are connected via a bigger connection than 1GBe too, but the device itself will have a much, much bigger connection. alongside these dual RJ45 LAN ports we have an additional USB 3.0 port for external devices and the 4 pin external power connector. 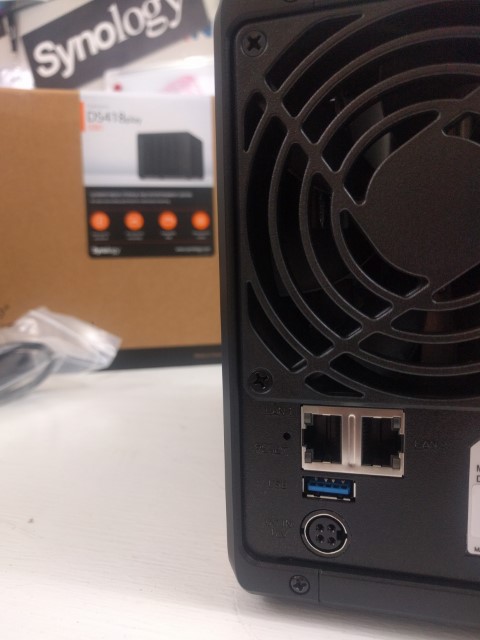 How does the Synology DS418play perform and is it better than the DS918+ at 4K?

The DS418play is designed to be able to do almost any typical NAS and Specifically Synology NAS tasks. It runs the latest DSM 6.1 software (DSM 6.2 now available in Beta HERE) and with that you have the ability to utilize a huge array of home, office, small business, big business and more. Along with these browser-based applications, you can download many, many mobile applications on iOS and Android, install 1st and 3rd party compatible desktop applications and even run virtual machines. All of these things are possible with most Synology Intel based, dual core and quad-core NAS servers, which does beg the question, what makes the DS418play stand out from the rest of the 2018 Diskstation crowd and worth purchasing? 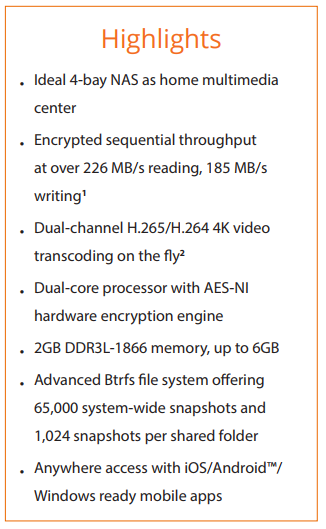 The key thing to remember is that ‘PLAY’ title in the model ID. This NAS can do all those tasks we mentioned well, but it is designed to focus on Media.

In the same way the Synology DS418J is designed to be cost-effective, the hardware inside is designed to focus on multimedia playback. With the ability to transcode two streams (so 2 separate playbacks) of 4K Media to devices that need files re-sized, re-shaped  or need the codec changed to a suitable format to played back in another format (i.e. playing a 4K movie to your iPhone). The two most common formats for 4K are H.264 and H.265 – which the DS418play supports. This transcoding is done live and on the fly and another advantage is to reduce the size of media files when accessed over the internet via WiFI of mobile phone data where smaller files might be needed or preferred. Again, this is possible on other NAS like the DS718+ and DS918+, but those are flagship NAS devices and as such are built to be great at all the tasks you demand of your Synology Diskstation NAS.

The direct point of the Synology DS418play is to provide you the best possible multimedia output, but keeping the price down. Synology themselves volunteer this by including their ‘Value series’ badge. This is not negative, like the DS218J 2-Bay, it means you are getting the best value (cost vs hardware & software) available and if you need 4K Multimedia Transcoding, a stable and transcoding Plex Media Server, DLNA Media server support for your Sonos, Smart TV, PS4 or XBox One – this truly is the best device out there in this budget!

Where and When Can I Buy the Synology DS418play Diskstation NAS?

The Synology DS418play NAS is available NOW for around £420+ ex. VAT and available with or without hard drives :