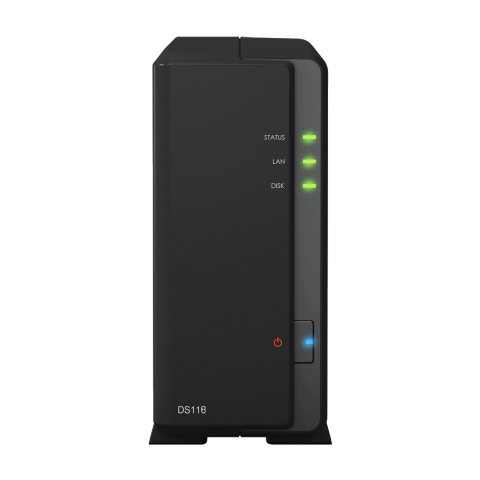 Synology have really been pushing NAS hard throughout September and October 2017 and today we want to highlight one of three devices that are still yet to come. The other two I have already lightly covered on this channel in the last week or two (DS218play and DS218j), but I wanted to talk about possibly the most interesting of them all. Let’s look at the Synology DS118 1-Bay Home NAS Server for 2017/18.

Following in the footsteps of the popular Synology DS116 (as well as the less popular and massively underwhelming DS115J) this new NAS is arriving with some rather neat hardware under the bonnet, but before we get to that, let’s discuss the elephant in the room – RAID. For a start, like it’s predecessor, it is it more focused towards performance than storage. Obviously, as this is running on a single Hard Drive or Solid State Drive, you lose certain storage option mainstays such as RAID hardware protection, but this is no longer the crushing failure risk that it once was. With cloud migration backup (from both synology themselves with the C2 Backup Plan, as well as the likes of 3rd party providers such as GoogleDrive, Amazon S3 and DropBox) to USB external backups to take off-site, the loss of a single drive is not the ‘game over’ that it used to be. Likewise, the pooling ability of RAID to combine multiple drives into a single visible depositary is not a factor with the use of a single Bay NAS such as the DS118.

How powerful is the DS118 NAS server from Synology? 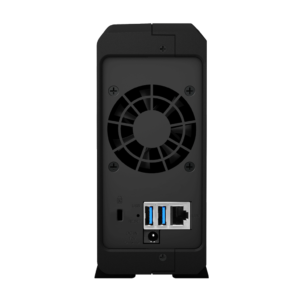 When it comes to NAS performance, that is where the Synology DS118 really begins to shine. Unsurprisingly the unit is arriving with an ARM based CPU, but what has really caught me by surprise is the fact we have seen the return of the Realtek RTD1296. I know that sounds a bit ‘train spotter’, but let me explain. This is the first ARM based CPU that I have ever seen on Network attached storage devices that:

This same CPU was featured on the DS418/DS418j (slight variation in cores and revision between them) and has already been tested by ‘EddietheWebGuy’ on his ongoing (soon to be published) 4K Comparison on the entire Synology and QNAP 2017-2018 range of NAS, and this CPU performed remarkably well! Additionally the fact this unit arrives with 1GB of DDR4 memory means that if your needs are less about media and more about lots of file transfers, then this simple and compact 1 Bay NAS will really leave you satisfied. Lastly the chassis arrives with a single LAN port for network connectivity, two USB 3.0 ports and measures a mere 166 mm x 71 mm x 224 mm – easily hidden out of sight and out of mind. LIkewise, it’s noise and imprint in your home or office is minimal at best with this hardware setup arriving at around 9W consumption whilst in HDD Access and just over 4W whilst the DS118 and hard drive are in Hibernation.

It is still too early to see to what extent that the DS118 from Synology will support the Diskstation Manager 6.1 operating system (currently DSM 6.1 is in beta), but we expect it to be to a similar level of support as seen on the DS418/DS418j. Likewise when it comes to more specialised areas like network CCTV use with Surveillance Station software, the DS118 supports upto 16 IP Cameras from popular brands like Reolink and Edimax and arrives with 2 licences included at no additional cost. Alongside first party apps, this device also should support popular 3rd party applications such as Plex (though we doubt it can support transcoding as a Plex Media Server), Apple Time Machine and can act as an iTunes server.  Finally it is fully expected to support most of the new and improved applications in DSM 6.2. such as Synology Drive, Synology Moments, Improved Synology Office and Synology Chat 2.0.

How much does the Synology DS118 NAS cost and when is it relased?

Possibly the msot impressive part about the Synology DS118 NAS is the price. The unit can be pre-ordered now at SPAN.COM at just £140+ ex.VAT and if you want to install a 2TB WD Red Drive, the whole thing will come in at 2 Terabytes of storage at just over £200+ ex.VAT. For a comprehensive, 4K Media and full network backup solution to all your home and multimedia needs, that is an incredible price Take a look below on how to order and more: 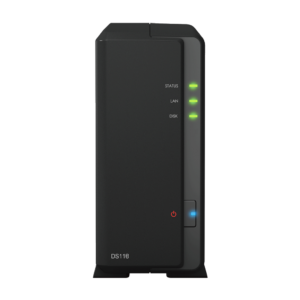 What are the Specs of the Synology DS118 NAS?

Below you will find the specification of the DS118 NAS from Synology. However, as always, these details are subject to change between now and official release, so always be sure to check the specifications that matter the most to you before placing your order. For up-to-the-minute information, but sure to go to SPAN.COM here and click the notify me button to receive instant alerts on any and all product changes. Take a look below at what we know so far.