Why is the QNAP TS-453BT3 Thunderbolt NAS so Important?

Earlier in 2017, we highlighted a brand new Thunderbolt 3 NAS that QNAP was working on. It promised the features and functionality of other thunderbolt NAS, but at a fraction of the price. Fast forward to today and we finally have our hands on the QNAP TS-453BT3 4-Bay Cost Effective Thunderbolt 3 NAS. With a host of impressive features and functionality, as well as versatile hardware on the inside and outside, is the TS-453BT3-8G the best NAS for photo and video editors on Mac and Windows systems?

QNAP and Thunderbolt NAS has been around now for just over two years and it has evolved into quite an amazing technological achievement for photo and video editors the world over. It started out back in 2015 as a neat idea to make a network attached storage device able to be connected to directly via Thunderbolt 2. On the face of it, why should that be so hard? The majority of NAS servers feature USB after all. However it was ALOT harder than it sounds due to the nature of the host-client relationship, as well as the means of the system treating connected devices. In brief, NAS operate by seeing devices as IPs (so, your place on a network that the machines in your home or office are sharing), then sending data to that IP address. Any other connected device via USB or eSATA would be treated as an external device, this was how the NAS could see and interact with them accordingly. However no one wanted to use a Thunderbolt port for external drives, they wanted to use it to connect the Thunderbolt+NAS directly to their TB Mac or Windows Machine. They solved this by labelling thunderbolt connected devices as IP devices and in doing so, made it possible for you to have DIRECT access to your NAS over thunderbolt.

The first device to feature this connectivity was the QNAP TVS-871T and though it sold well, it was a little primitive in terms of connectivity to the devices that followed, but it arrived with the Thunderbolt 2 connection, 16GB of DDR3 Memory, 10GbE connectivity and more. How it also arrived with a £2,000 price tag. THis pushed it FIRMLY into a specialised and enterprise price bracket. 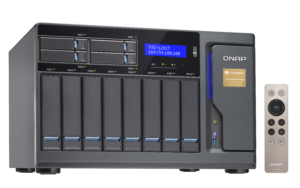 A year later the QNAP 82T series arrived, bringing with it improved hardware specs both inside and out, really evolving the thunderbolt NAS brand and what it could do. As well as arriving in 6 Bay, 8 Bay and 12 Bay, it introduced triple HDMI, Speakers, 10GbE ports, m.2 SSD caching, 2.5″ dedicated SSD bays for tiered storage, improved ventilation and eventually Thunderbolt 3 connectivity over 4 ports – meaning you could connect 4 different Mac devices via Thunderbolt AND connect to it via the internet and network too. Finally, the device featured additionally internal PCIe slots for installing various upgrade cards, DDR4 Memory upto 64GB and you could even combine the Thunderbolt connectivity and 10GBe to use the device as a means to connect your TB2/3 Mac to an existing 10GbE network, The T2E connectivity saved many users almost a thousand pounds on its own. Sadly, like the TVS-871T, the device is very, VERY expensive with even the most basic stripped unit at £1600 (missing many key features) and reaching almost £3700+ ex.VAT. A Stunningly powerful NAS that is, sadly, stunningly expensive

Today we have the new and game changing TS-453BT3 Thunderbolt 3 NAS release. What makes it such a game changer is that pricetag. Arriving at under $999,  the device features MANY of the key functions and abilities of the TVS-871T and the TVS-1282T3, but manages to trim the edges to bring you thunderbolt 3 direct connectivity on a NAS, at a huge drop in price. Many of the key features such as:

The retail box and accessories included with the TS-453BT3 are quite similar to the TS-453B. Outside the rather plain retail packaging you will find two ethernet cables, a power cable, screws for drive installation, an installation guide, the new fully featured QNAP remote control, an external PSU and of course the TS-453BT3-8G unit itself. Straight away I was a little surprised at the lack of Thunderbolt 3 Cable, but then again it is understandable. If you want to keep these device as cost-effective as possible, the removable of parts that users may well already have can really make the difference. It is the same reason they do not include 10GBe cables (distance is a key factor in those) and an HDMI cable for multimedia.

The chassis is an adapted version of the TS-453B NAS Chassis released back in Spring of 2017. The case is designed with two objectives in mind. 1, To keep the device compact and 2, to reduce noise, but still keep cooling and ventilation high. This is successfully achieved with a NAS case that is almost half the size of the TVS-682T, but with only one rear fan, ventilation on almost every side and temperature sensors throughout. The front of the device is the same as the TS-453B but silver as opposed to blue, with dual USB-C ports for that all important Thunderbolt 3 connection (as well as USB 3 as needed of course). There is an LCD panel providing realtime information about the device, LED lights for highlighting the HDD health, system access, network access and more. If you move the front panel, you find the 4 fast access drive bays (cannot be locked sadly) that eject plastic click and load trays. The device supports the very latest 10TB and 12TB Hard drives, however always do bear in mind that the bigger the drives, the more rugged the construction and overall the more noise the drives might make whilst in operation.

What ports are available on the rear of the QNAP TS-453BT3-8G Thunderbolt NAS?

Once you get over the thunderbolt 3 ports on the front, you would be forgiven for thinking that the rest of the device is a disappointment – WRONG! Not only arriving with all the fully featured connectivity of top spec QNAP NAS, such as dual LAN, 4 more USB 3.0 Ports, dual 1.4b HDMI, a speaker and Audio In/Out. But these pale into comparison when you see that this device arrives with a 10GbE (RJ45, AKA a 10GBASE-T port) for ready super fast networking speeds. This surprise is doubled when you see that to accommodate this connection, QNAP have included the QM2-2S10G1T pre-installed.

So, not only are you not using up a PCIe slot for the thunderbolt ports (as done with every other Thunderbolt NAS yet), but also that they have used the QM2-2S10G1T Expansion card, which includes those dual m.2 SSD upgrade slots inside. This is ingenious use of both space and power meaning this could well be the most productive, yet compact NAS ever produced!


What are the CPU and Memory on the Cost Effective QNAP TS-453BT3 NAS?

You would be forgiven for being concerned about what CPU and RAM would be inside this NAS. When the words ‘Cost Effective’ or ‘Value for Money’ are thrown around, many are suitably suspicious. However, like many of the foundations of the TS-453BT3, this device has used the same CPU and 8GB of DDR3L Memory that is featured on the TS-453B. An Intel Celeron J3455, featuring a Quad-Core with 1.5 GHz frequency per core that can be burst up to 2.3 GHz. It is a 64-bit Architecture chip that also features Intel HD Graphics and for the security conscious, AES-NI Hardware Encryption. As mentioned, the device arrives with the maximum memory pre-installed at 8GB (2 x 4 GB DDR3L).

What can the TS-453BT3 do in terms of Software and Appliciations?

Finally we can discuss the software abilities of the QNAP TS-453BT3. All that hardware and power will be rather useless without being able to do anything with it!

The more important part to remember too is that ALL OF THE ABOVE can be done at the same time! Once again, this is by far the cheapest Thunderbolt NAS that QNAP have ever released, but it still manages to be powerful too!

SPAN.COM, the NAS Experts will be one of the first stores worldwide to get hold of this item and we recommend checking them out to get your hands on one. With over 20 years of experience in Data Storage, they are the go-to guys for all things data. 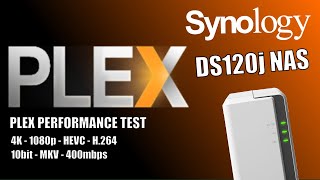