Which Budget NAS deserves your data? The DS218J or the DS216J? 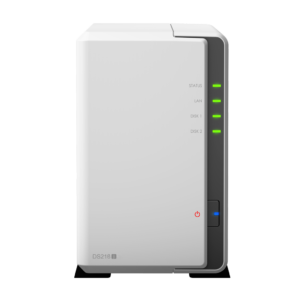 With Network Attached Storage (NAS) being so popular these days, it is completely understandable that in order for everyone to buy one, some more affordable NAS solutions need to be developed. As much as you want a NAS that can do EVERYTHING, it can be rather disheartening to look at a price tag that is literally in the thousands of pounds and realise it is vastly outside your budget. So the next time to look at what you can afford and that is where the Synology J series comes into play. As already discussed in previous NASCompares articles, the Synology J series is designed to be cost-effective (not cheap – very important). That means that the hardware you are buying, though comparatively lower than those in the bigger Intel based, DDR4 and 10GBe ranges, still arrives with standard specifications that will get smaller, standard NAS tasks done. Until this month, the current cost-effective J series NAS that Synology had available was the £130 DS216j (released in late 2015) and it proved to be very popular indeed, with a price point that meant that it and a 2TB Seagate Ironwolf NAS Hard drive came in at just over £190 ex.VAT. The newly available Synology DS218j NAS is the very latest cost-effective unit to be released and many people are wondering how it compares with the 2 years older model, it is worth an upgrade, should they buy the older NAS in a Cyber Monday and Black Friday 2017 Sale, or should they buy the new model? So let’s compare the DS218j and DS216j from Synology.

What can you do with a cost-effective NAS? Does budget NAS mean budget results?

It is completely understandable that many would be nervous buying such low price NAS devices as the DS216j and DS218j. They have been designed to be incredibly affordable and all too often we worry that something is too cheap. I referenced the comedian Dave Gorman a while back with he talked about cheap and too-cheap. For example, you see a ticket from the UK to the U.S. for £180 and you “wooooah..that’s a bargain, I will buy that”. If you see the same ticket buy for £9.99, you think “that is TOO cheap, the plane must be made of paper, it will never come back!”. In essence, people doubt that they can’t possibly afford to go that low and still provide the service promised. So what exactly can you do with a Synology DS218j and DS216j NAS? Before we compare what is better or worse about these NAS server devices, let us look at what is the same: 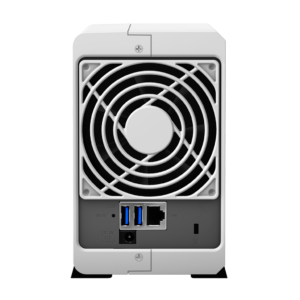 DESIGN – Simple and compact, this white plastic chassis has been around for a while. That said this newest release does feel the tiniest bit different in texture. That said, it is still very much designed with cost-effective construction in mind and is completely plastic externally. This does result in a lower noise level and ventilation is excellent thanks to the Synology logo being fully ventilated, the rear fan being fully controllable and the CPU being a low power usage, low heat processor

FEATURES – If you are looking for a NAS to conduct basic, but reliable network file exchanges, stream media over the network or over the internet using the first party applications on mobile and desktop, this will be more than enough. Same with other 3rd party applications such as Apple TIme machine and migrating data between cloud services back and forth. Lastly, if you want a low-level DLNA media server for streaming to your smart TV, Sonos or Bose sound system, iPad, PS4 or XBOX one – this will do the trick. Just do not expect miracles

PERFORMANCE – For what you are paying, this device performs well. Slow and steady, as long as you are not conducting higher level or dense file write operations, this will give you a solid 90-100MB/s for your needs.

VALUE – Without a doubt, the lowest priced NAS for 2017 and 2017 in 2-Bay from Synology and if this is your first tentative steps into the world of NAS, then this is surely a great start. RAID, DLNA support, the DSM software, USB 3.0 throughout and arriving with a competent CPU, this is easily the most cost-effective NAS I have ever seen

DESIGN – Yes, it is a low price NAS server, but there is no denying that the chassis does look and feel a bit cheap. Plus the lack of trays and internal HDD installation means that hot swapping is not an option. NOt a huge problem, but will be a bit annoying if/when introducing new, replacement or RAID replacement drives

FEATURES – You can forget features and functionality like 4K, transcoding, Plex Media Server stability. This NAS is designed for low level access and use and if you work outside of that area, you are gonna have a bad time

PERFORMANCE – Again, the performance will not exactly blow your mind and can be easily outmatched by almost all other synology two bay NAS devices. The CPU in a NAS in this price range is understandable, but the 512MB of memory feels a little rude

VALUE – Fantastic price, but you cannot complain if you feel it’s limitations a bit early and wish you had spent more on day one.

DESIGN – Very simple Plastic design but still very much befitting of a NAS and more appropriately Mac environment. OPlus the unit will not generate enough heat for the plastic to be a problem as also keeps production costs low enough to keep this NAS at around £100 without the drives.

FEATURES – The Synology DS216J may well be low on the NAS hardware front but it can perform and provide most of the standard file-based tasks that other NAS units can do outside of the J series. You can forget about the likes of Plex Media Server transcoding, but you will have excellent Plex video streaming locally as well as Synology DSM NAS OS abilities to create download tasks, backup images, RAID storage, and DLNA media distribution.

PERFORMANCE – Don’t expect the ground to shake with its awesome power! But again, it performs solidly and comfortably at those low-end file-based tasks and is definitely the NAS server of choice for those looking for Mac Backup images with the likes of Apple Time Machine.

VALUE – For the cost, the Synology DS216J is an excellent NAS that is is one for the first time network Attached Storage user or those with simple, small file tasks. I would recommend this NAS with a couple of Large Hard drives like the WD 4TB Red or for those on a low budget, skip NAS drives entirely and go for the Seagate Archive Derives in a RAID 1 (which you can do because these non-RAID drives are ok for simple mirroring).

DESIGN – NAS Hard Drives are installed internally (no trays on the Synology DS216J) so a tiny (and I really do mean tiny) amount of physical installation is required.

FEATURES – Due to those hard drives being installed internally without trays, you lose hot swapping as an option. Also although it will provide most file-based NAS applications, it will be on a more minimal scale to those you would expect from the standard Synology DS216 or DS216PLAY
PERFORMANCE – The DS216J leaves very little room for growth or evolution – You get a solid NAS that performs ploddingly in the background – but 3 years down the line it will not have grown into your dream NAS.
VALUE – Buy this NAS for tasks that are smaller and more manageable and don’t make plans for expansion. this is a NAS for today and even for tomorrow… just not for next week!

Should you buy the Synology DS218j or the DS216j NAS? – CONCLUSION

Ultimately these two NAS devices are near enough on hardware that it is all too easy to just pick the cheaper of the two, however, I urge you to take an extra second to focus on that increased frequency on each CPU core. Likewise even though both units arrive with 2 years of manufacturers warranty, I would advise buying the newer unit to ensure that parts that may be needed for repair are more readily available. That said, if you see the Synology DS216J NAS in a Black Friday 2018 sale, for more than £20 less, then go for it. It is a greater started NAS and will help you learn the ways to really maximize your private cloud storage later.

Below are the specifications for the DS218j and DS216j from Synology: