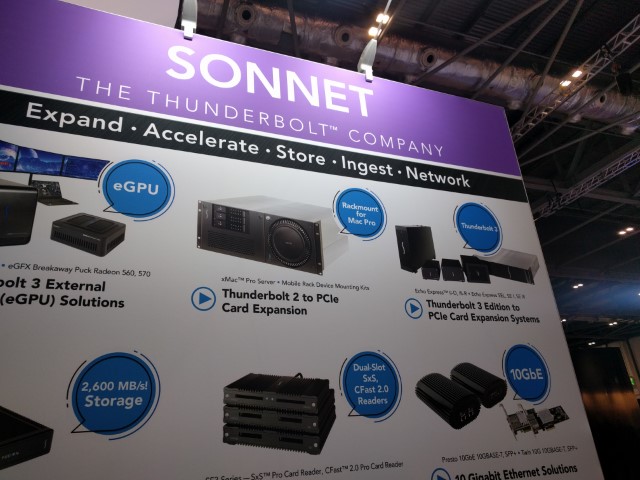 Who are Sonnet Technologies and why should you care?

After my recent posts about the BVE Expo, one brand that especially stood out (despite it being almost completely unconnected with NAS) was the largely Mac favoured brand, Sonnet at stand G30. Normally I would not stray so far outside of network storage territory, but this is going to be a rare exception because with thunderbolt NAS fast becoming a defacto means of improving efficiency and production in your workflow, you are not only going to see more and more devices living on a single daisy-chain around your NAS, but also see more not storage peripherals making their want into NAS  in general. Which brings me to Sonnet, who owns a massive market share of Thunderbolt-enabled devices. Primarily Thunderbolt to PCIe card expansion systems and eGPU boxes, they also specialize in pro media readers so you can have a single access point for your portable media; RAID storage systems that take the stress and worry out of your data needs and storage, network, and computer interface cards for pro users in the audio, video, and broadcast industries.

Why Buy Sonnet Thunderbolt 3 Technology in 2018 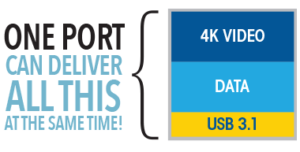 If you have already heard of them, that isn’t a massive shock as they have been around for over 30 years and featured heavily both on the SPANTV youtube channel and blog. Sonnet has pioneered and brought to market innovative and numerous award-winning products that enhance the performance and connectivity of Mac systems as well as Windows and other industry-standard computers (but let’s be serious, Mac users bloody love them). But as with any brand that featured at BVE 2018 and indeed any that you want to invest your budget into, their range is remarkably diverse and that’s why I wanted to help you get to grips with the units you NEED to know about in 2018. Whether they are for adding to your NAS system to further improve production, or as a completely separate endeavour off-site, below I have touched on the best of the Sonnet range and ones you should be looking at this year, new and old.

Let’s be honest, of all the parts of a computer that matter most, the visual interface is pretty much in the top 3 (with power and input sharing the podium). If you are a editing in post, there are many reasons why having more than one visual output can be of benefit. 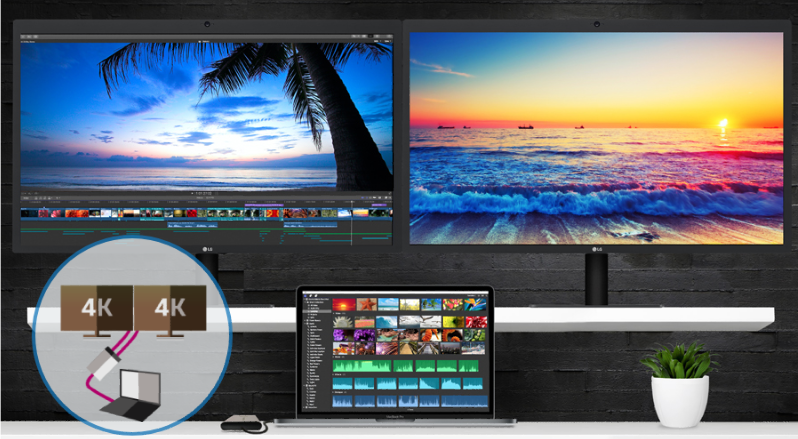 Separate screens so you can dedicate tasks to each, mirroring to display or promote your work or simple to bench test various formats at once – it’s a growing trend. Below are two of the best that Sonnet has to offer.

Best Sonnet Products for Storage for 2018

As already touched on above, Sonnet has an extensive range of Storage devices that provide incredible speed or portable access via Thunderbolt 3. What we are becoming increasingly aware of is that many are compatible with Thunderbolt NAS and the versatility of a QNAP NAS and combining Sonnet Storage peripherals is a massive win for productivity. We will be conducting numerous tests in the coming weeks between which devices you can combine with others to create a perfect centralized platform, but in the meantime you can take a look below at the very best and very fastest storage options for those working either on-site in post-production, or even those with boots on the ground capturing their next project through the lens.

For those that are not aware, Thunderbolt connectivity is not limited to storage and external accessories. When the speed and plug n play nature of Thunderbolt technology was made commercially available, it didn’t take IT boffins very long to realise the potential of an external connection that was as fast as (and often faster than) an internal connection. This means that compact, portable, slimline devices with this connection could be connected to external devices that would hold extremely powerful devices and send the data up and down the thunderbolt connection between them.

The biggest and most exciting of which was the abilities of an external PCIe based thunderbolt case (ePCIe) and what performance benefits it would give to the connected TB3 host system. Think of a car that is designed to be power/fuel efficient, but with a special socket on the rear that you could easily plug in a MASSIVE extra engine into and within seconds be able to use it? That is what thunderbolt based external PCIe gives portable thunderbolt devices like Ultrabooks, MacBook Pros, Elitebooks and even a few new netbooks.

The potential of this kind of technology was clearly visible to Sonnet very early on, given they currently produce one fo the biggest and diverse ranges of ePCIe over Thunderbolt 1,2 and 3 available form any manufacturer in 2018. Below are just a few of the most popular and versatile options available. They have even extended to solutions that arrive with a modified high-end Graphics card preinstalled, taking any fuss out of setup and giving you a solution that can literally be system ready within 30 seconds of being removed from the retail box and accessible for instant use with 60 seconds over Thunderbolt 3! Alongside this, the Breakaway series of high powered PSU devices still continues to wow reviewers all over the production landscape.

If you would rather choose your own graphics card and install it in this full speed and high powered thunderbolt 3 ePCIe chassis, then you will want to go for the bigger and better Sonnet Breakaway eGFX. This is the expansion chassis for those who want the power of choice, performance and already have the GPU card they want in mind. Available in


Of course, there is more to external PCIe chassis that graphics and rendering. As previously mentioned, Sonnet has a long history of thunderbolt enabled ePCIe devices and some are designed with everything from 10Gbe and Sound cards, through to RAID Controllers and more. Below is one of the most popular of the ECHO series available with that ever-evolving USB-C based port!

We will shortly be published a detailed comprehensive breakdown of just how the Sonnet Breakaway series compares with individual popular graphics cards installed, against the results of internally installed cards. AS well as more information on connecting MULTIPLE eGPU chassis for combined performance boosts – Stay tuned for that one!

Finally, we cannot talk about external PCIe without talking about the ever-growing collection of internal PCIe cards that sonnet have developed. It is fair to say that they have been busy for the last few years and it looks like 2018 is going to continue to be so. With USB 3.1 Gen 2 and Thunderbolt 3 growing in popularity, as well as the ease of 10Gbe network upgrading, it is fairly certain that one of the cards below will be the key to vastly improving the production times of your work (regardless of your industry). One of the reasons that PCIe upgrade and expansion cards are so popular is that they work out as a fraction of the cost of a new system an in the majority of cases perform just as well as a new system would.

What to expect from Sonnet Technology in 2018

If there is one theme that keeps coming up when looking at the last 12 months of releases at Sonnet, it is that they understand what the broadcast video editors out there need. Although this is not their entire range of devices, much like the apple release model that few companies are able to observe, they release a few items a year and the ones that do are developed upon growing trends and around you the creator. Our next article on Sonnet will centre around their growing range of external PCIe chassis that support graphics cards big and small, and how they compare. As well as the newly revealed Breakaway 650 eGFX that supports the latest VEGA 64 cards, where power is paramount, resulting in short-term peak loads that far exceed the 375W from other breakaway and chassis from other vendors – currently the only one of its kind). Lastly, do not forget that Sonnet will be at NAB 2018 in a little over a month in Las Vegas from April 7th to the 12th.