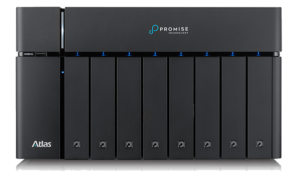 Since the release of the QNAP Thunderbolt NAS series 2 years ago, we have seen a growing trend of network attached storage devices being used in photo and video editing post-production. Of course, QNAP really has dominated the market in this field, not only because of their strong reputation in NAS, but also due to them adopting Thunderbolt 2 and Thunderbolt 3 connectivity, a widely popular port with the Mac community. The result is that QNAP occupies a large percentage of the Mac NAS server community. Until now they were the only company who released thunderbolt NAS devices, with most thinking they would be the only ones (due to ownership and/or development of the technology). However today we want to announce a big, BIG change in the world of both DAS (direct attached storage) and Thunderbolt 3, with the release of the new Promise Atlas S8+ Thunderbolt 3 NAS for Mac and Windows. This is the first thunderbolt NAS from a company other than QNAP. Thunderbolt has grown so popular that it isn’t hugely surprising that another brand has challenged this prestigious area. Of all the companies that would attempt it, Promise  Technology is a good choice, as they have an already existing dominant thunderbolt 3 reputation (Pegasus 3). It still remains to be seen if the Promise Atlas S8+ will rival that of the QNAP TVS-1282T3 or TS-453BT3 NAS, but let’s take a moment to discuss what this new thunderbolt NAS can do 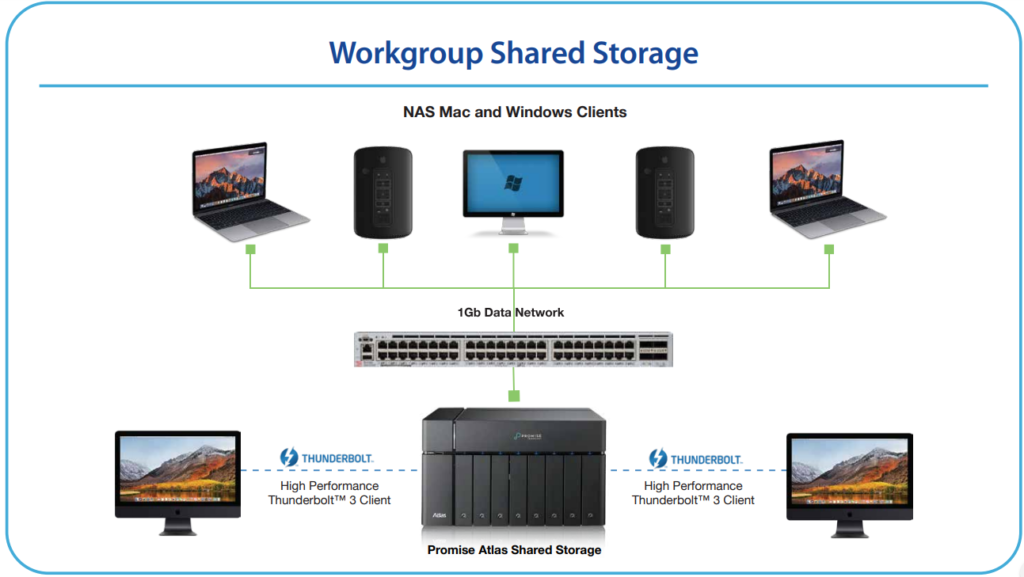 Promise Atlas S8+ is designed to be a combination of easy shared storage for small groups working with the added benefit of hi-res video-editing and production workflows over thunderbolt for 4K editing and RAW production. Thanks to optional cards to choose from, it allows Thunderbolt 3 live access or 10Gbe network connectivity (providing varying levels of speed access) with iSCSI support. Featuring an intel i5 Quad Core and 16GB of DDR4 memory, a fast local user interface, several capacity options (factoring RAID considerations) and simple GUI make it perfect to centralize your workflow, provide many users simultaneous access, share finished work and backup your content to multiple sources to a single location. This is further backed up with cloud-based access too with popular platforms like Google Drive, OneDrive and Dropbox synchronization. Finally, Promise provides fully populated Atlas S8+ units with Enterprise-class 3-year warranty and 24/7 web/chat support. 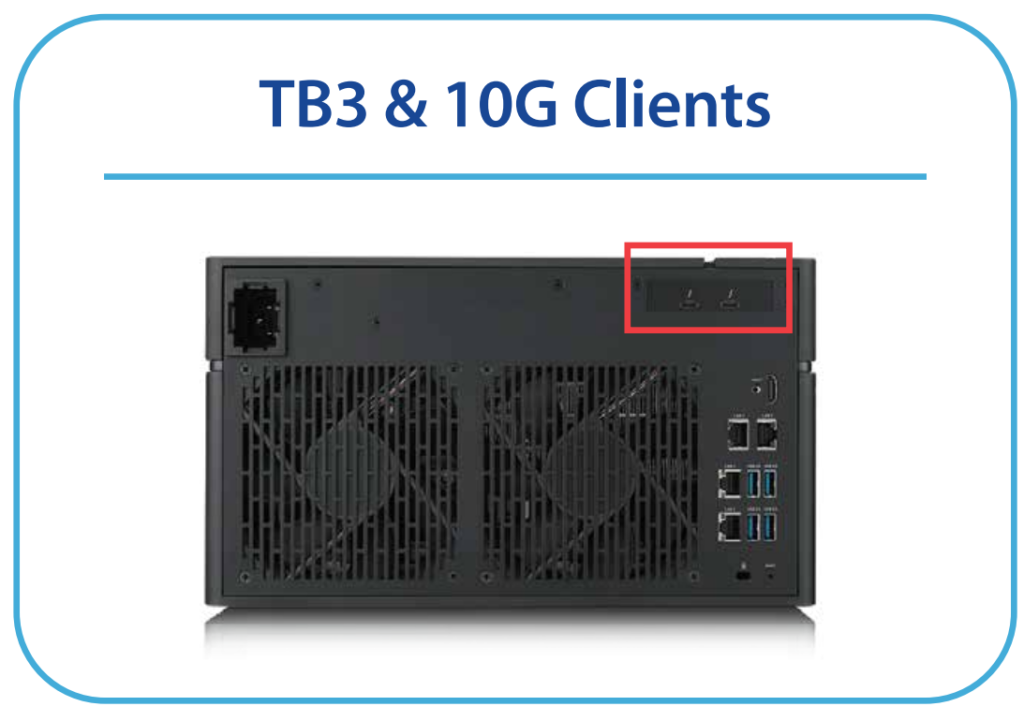 The Promise Atlas S8+ features a number of key hardware and software factors that will make comparisons between it and the QNAP Thunderbolt 3 NAS inevitable. Take a look: 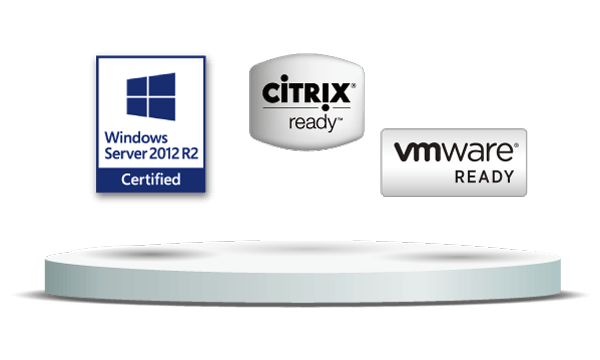 Why Has Promise Released the Atlas S8+ Thunderbolt 3 NAS?

Originally I would have thought that perhaps Synology NAS would have been the first brand to release a Thunderbolt NAS to rival that of QNAP. However, Synology has been pretty open with the network-only attitude to their systems and unwilling to adapt the architecture to adopt Thunderbolt connectivity. But for a thunderbolt pedigree storage brand like Promise to adopt NAS in their existing range is both a great deal easier and a logical choice for photo and video editors who use thunderbolt speeds to edit external storage, but need a NAS to effectively distribute their product. The hardware and design of the Promise S8+ Atlus could be compared to that of the first generation QNAP thunderbolt Nas, the TVS-871T. However, this new Promise Atlas S8+ Thunderbolt 3 NAS features Thunderbolt 3 or 10Gbe as you see fit as a means of connectivity. It still remains to be seen how the promise Promise Atlas S8+ Thunderbolt 3 NAS will fair with rivalling QNAP NAS units.

When will the Atlas S8+ Thunderbolt 3 NAS be released? 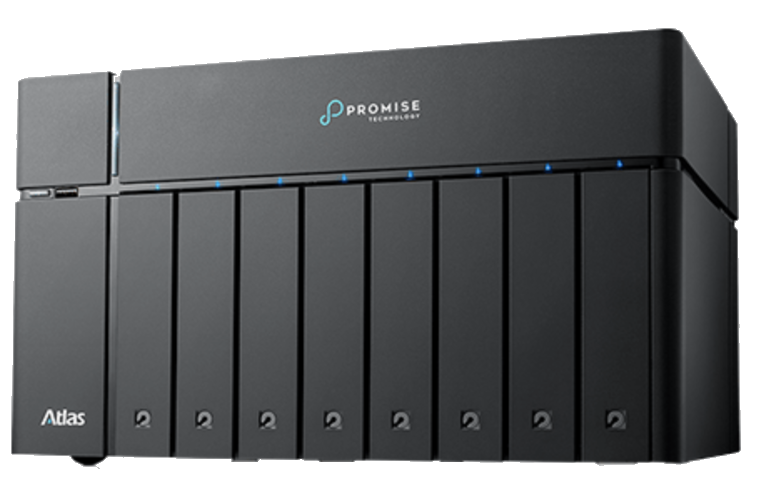 What we have learnt from the Promise range of Thunderbolt 3 devices is that announcement and release can sometimes take many, many months and therefore I cannot see the Promise Atlas S8+ being released before Q3 of 2018.

What will be the Read and Write speeds of the Atlas S8+ Thunderbolt 3 NAS?

One of the most regular complaints people make about the QNAP Thunderbolt NAS range is regarding read/write speeds over Thunderbolt. Despite providing thunderbolt direct attached access to the storage media in the NAS, it is not the traditional plug-n-play method of connectivity you associate it thunderbolt storage and is a method of connectivity known as thunderbolt-over-IP. It means that your storage is connected with an IP. This is still very straightforward and only a little annoying the first time, but the result of this is that often connections over thunderbolt on a QNAP NAS are noticeably lower than that of a traditional thunderbolt 3 DAS, such as the Promise Pegasus or on Drobo 5D3. Now this new thunderbolt NAS is being designed by a brand chiefly associated with DAS storage, the hope is that we shall see significantly higher read-write speeds than those available on the QNAP thunderbolt 3 NAS. However, it is still too early to say.

All current information indicates that the Promise Atlas S8+ NAS only has one available PCIe slot. This slot will either be populated by a Thunderbolt 3 card or a 10Gbe 10GBASE-T (so, RJ45 style connectivity) card. It is a shame we are not able to utilise both connections on this device at the same time as you can with a QNAP Thunderbolt Nas and both variations of the Promise Atlas S8+ NAS can be purchased separately.

What will be the Price of the Promise Atlas S8+ Thunderbolt 3 NAS?

PromiseThunderboltt 3 RAID storage is notoriously one of the most expensive options out there for budding photo and video editors looking for reliable RAID storage. However, in fairness, it is worth mentioning that they have the best warranty and hardware support of almost any DAS brand available. Likewise, most Promise thunderbolt RAID storage devices arrive pre-populated with hard drive media and it is important to factor this into the cost of your thunderbolt solution, to avoid comparisons between devices without hard drive media (though a part-populated like the Buffalo TeraStation NAS range would be a welcome option).

There is no doubt the Promise Atlas S8+ Thunderbolt 3 NAS will cost you £1500-2000+ and that does not even factor in the hard drive media, but with this will come a Thunderbolt storage and NAS enabled RAID device that shall hopefully rival that the long-established QNAP series. It is starting to look like this one-horse race has REALLY opened up! below are the SPecifications of both the hardware and software of the Promise Atlas S8+ Thunderbolt NAS for 2018 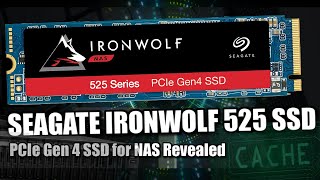