Transform your storage workflow. Meet the bigger, better, bolder Drobo 8D. Capable of supporting 16 volumes of up to 128TB, with a total storage pool of 256TB, 8D is designed to meet the need for data-intensive workflows. With lightning speed ThunderboltTM 3, the Drobo 8D is the fastest direct attached Drobo yet. The Drobo 8D is the only Drobo with the Intelligent Volume Management, which allows for the flexibility of manual and automated management of storage pools. Creative professionals will experience the editing power for media rich, high resolution workflows with the protection of Drobo’s patented BeyondRAIDTM technology. The 8D is also ideal as primary storage for SMBs requiring reliable, easy to use, high capacity solutions.

Data Protection and Expandability Made Simple on the Drobo 8D

Built on award-winning BeyondRAID™ technology with single- or dual-drive redundancy, Drobo 8D protects your data without any user interaction, even in the event of multiple drive failures. Drives can be added or hot-swapped and updated in real time for storage expansion with zero downtime. If you’re running low on space, the lights on the front tell you what to do. Just add a drive in an empty bay or remove a smaller drive and replace it with a larger one. 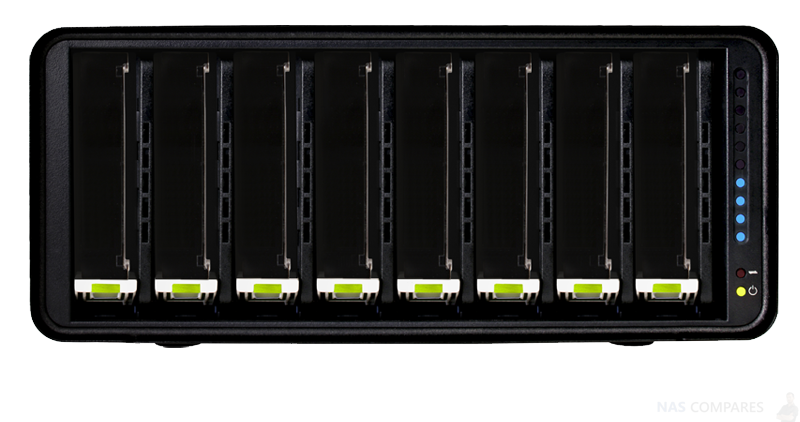 Power of Thunderbolt 3 over USB-C on the Drobo 8D

Thunderbolt 3 technology provides lightning fast speed. This optimizes your performance when transferring large volumes of data. Drobo 8D is equipped with dual Thunderbolt 3 ports for daisy chaining. Connects up to six Thunderbolt devices or five devices and a monitor at the end of the chain.* Supports one 5K monitor display or two 4K monitors. By having 8D arrays in a chain, you can have up to 588 TB of usable capacity and achieve throughput by enabling the bi-directional 40 Gbps performance of Thunderbolt 3.

In addition to drive failure protection, Drobo also protects against potential data loss during a power outage. In every Drobo we include battery backup technology to protect data in memory or cache. When power spontaneously goes away, Drobo moves any in-flight data to onboard flash in your Drobo, so it will be protected and moved to your disk drives once power is restored. This ensures your important information is safe and sound. Even better, your battery recharges itself and is designed to last for the life of your Drobo. Drobo doesn’t just protect you from a drive failure, but also from potential data loss after a power outage. Often found only in arrays that cost tens of thousands of dollars, Drobo 8D includes a battery that protects all data in memory, or cache, that is, data on its way to the drives. During a sudden power loss, the internal battery keeps the Drobo alive long enough for the data to be written to nonvolatile storage. The battery recharges itself and lasts for the life of the product. 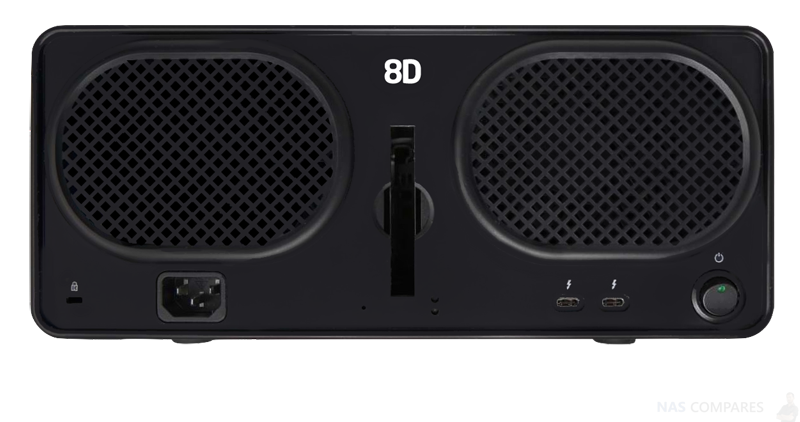 Drobo 8D is compatible with Apple’s Time Machine. Time Machine can consume the entire capacity of an external storage system. By utilizing the Drobo Dashboard, you can simply allocate capacity limits for backups and data storage.

Performance Upgrades on the Drobo 8D

Drobo 8D comes with an Accelerator Bay in a rear mounted slot for an SSD to enable the patented Drobo Accelerator Cache technology. The Drobo Hot Data Cache keeps a copy of your most frequently accessed transactional data so that it can be delivered at blazing –fast speeds, and dramatically accelerates loading large photo libraries and other I/O intensive operations. Optimize your productivity by smoothing out your workflow. SSDs can also be utilized in the front bays of the Drobo 8D for Data-Aware Tiering, allowing for transactional data to migrate to the SSDs. This ensures that both writes and reads are accelerated.

Drobo devices have always been space efficient and the Drobo 8D is no exception. It is designed to provide high capacity, without taking up a lot of your valuable desk space. It is compact because of Drobo’s unique carrier-less drive bay design, allowing drives to be installed very close to each other. Includes Thunderbolt 3 cable. 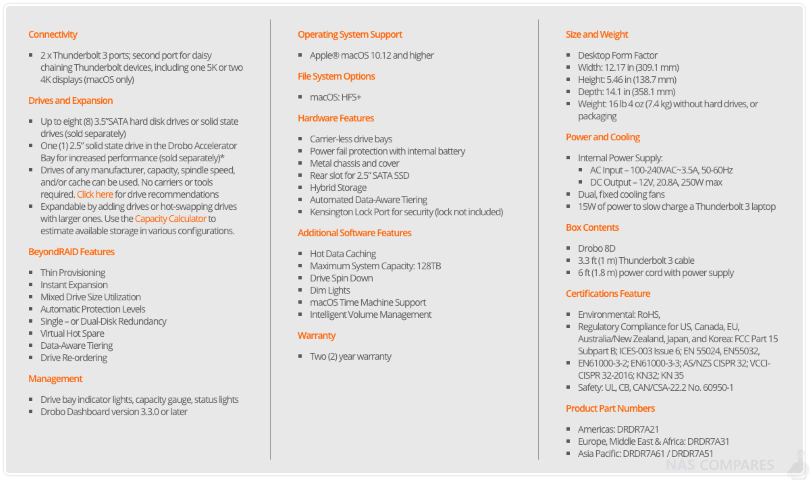 Drives and Expansion – Up to eight (8) 3.5”SATA hard disk drives or solid state drives (sold separately) – One (1) 2.5” solid state drive in the Drobo Accelerator Bay for increased performance (sold separately)* – Drives of any manufacturer, capacity, spindle speed and/or cache can be used. No carriers or tools required – Expandable by adding drives or hot-swapping drives with larger ones.

When will the Drobo 8D Thunderbolt 3 DAS Be Released?

The Drobo 8D 8-Bay Thunderbolt 3 DAS is available now for order from SPAN.COM for £1060+ ex.VAT

All-profiles?
Is there a limit to the number of cameras for Synology Surveillance Station?
Can I mix these drives in my Synology 920+?
DS920+ RAM upgrade not recognized in VMM (but elsewhere it is!)?
2x Drives SHR (without data protection) Can I swap one?