If you have purchased a Synology NAS in the last 2-3 years in the ‘PLUS’ series of devices (eg. DS920+, DS1019+, DS720+, DS918+, RS1619XS+, etc) then chances are one of the reasons that you considered it was because of the great level of future-proofing it arrived with featured inside. From Upgradable memory to expandable storage later in the device’s lifespan, there are a few ways in which you can ensure that the device has its performance kept high several years after it’s first deployment. However, one of the more unique and (at least until recently) Synology-Only ways that you have available is the use of twin dedicated NVMe SSD bays. This is the feature that allows you to introduce high-speed PCIe bandwidth SSDs that leverage the performance and IOPs increases available to solid-state drives and supply them for use to your larger and slower (although much more affordable) Hard Drive RAID storage pool and increase performance with the use of caching – all whilst not taking up any of the regular storage bays in your 2, 4, 6 or 8-Bay Storage device. As good as that sounds (and generally is, when setup and used correctly), NVMe SSDs a noticeable degree more expensive than traditional SATA SSDs and many wonder if the Synology NAS system is actually taking advantage of the increased speed/performance of NVMes over SATA SSDs at all. With traditional SATA 2.5″ and M.2 SATA SSDs arriving at typically reported speeds by manufacturers of 450-550MB/s Read/Write, whilst NVMe SSDs reporting anywhere from 1800-5000MB/s performance (very much dependant on the PCIe and NAND used) that is a HUGE difference in performance potential and you want to KNOW that you are getting some/all of that benefit. So, today I want to share some brief testing I did on comparing SATA SSD vs NVMe SSD caching in a new Synology DS920+. These tests form part 1 of a series of tests I am working on, alongside tests using the new Synology E10M20-T1 and M2D20 upgrade cards (coming soon) and should be used as guidance only and not a clear proof of anything widely conclusive. But nevertheless, I think they are interesting to examine.

This test had to take several factors into consideration. I originally wanted to conduct this test using a RAID 5 (SHR really) scenario, however since the release of more compact NVMe equipped/upgradable NAS in 2-Bay (Synology DS720+, Lockerstor 2. TS-253D, etc) I decided to restrict this test to 2 hard drives in a RAID 1 (again, SHR really, but comparative parity logic). I will be covering larger RAID configurations in my PCIe Upgrade card tests later on. Additionally, I have selected to use both HDDs and SSDs from the same brand (Seagate Ironwolf) to keep things uniform. Finally, the testing logic was as follows (in efforts to create a scenario another user might actually use in real life): 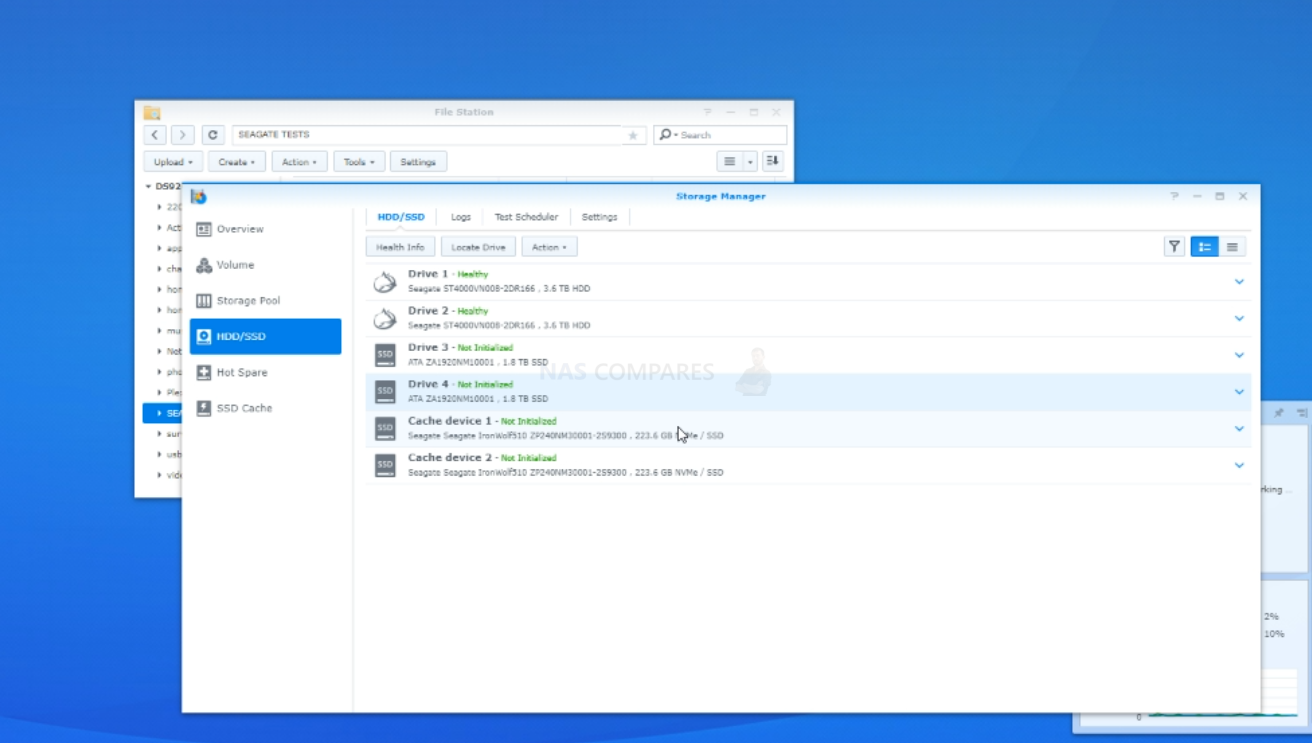 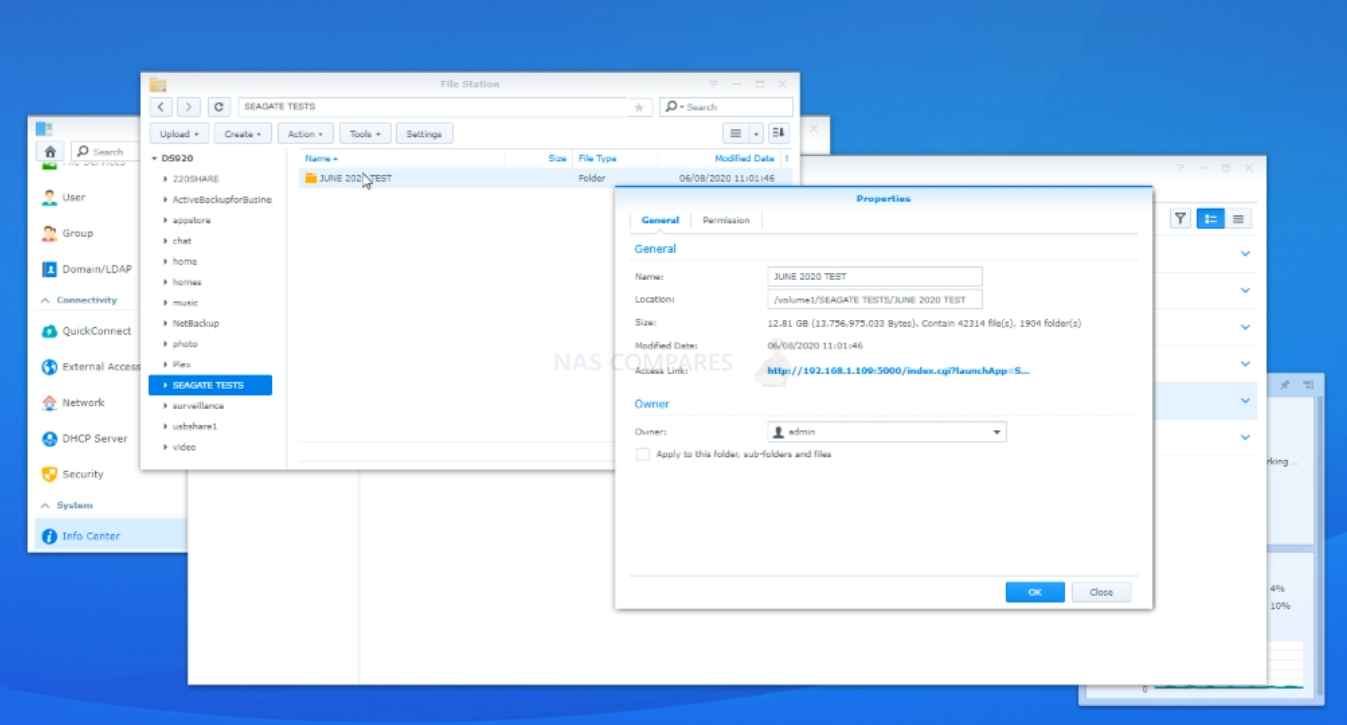 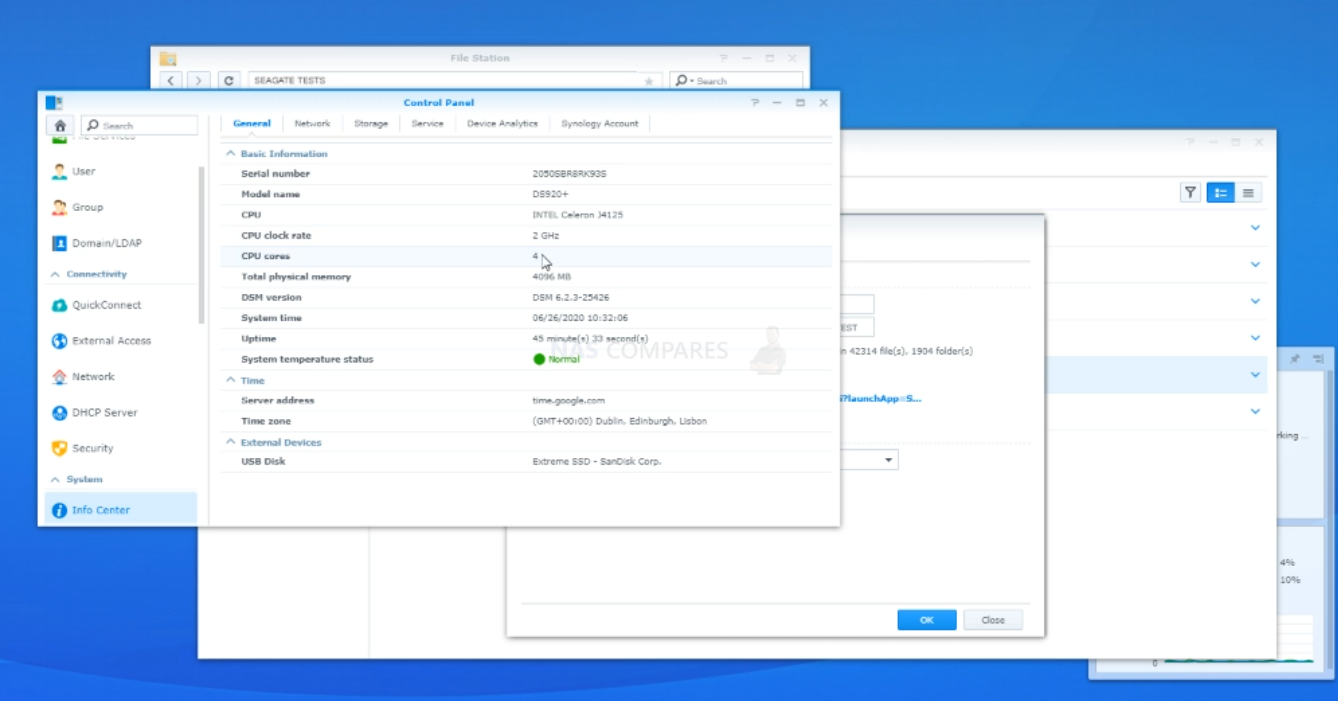 The Full System setup through the test is

The first test is the vanilla 2x NAS hard drive in an SHR mirror.

Next test was the SATA SSDs. As mentioned, the setup was reset, files deleted permanently, SATA SSD cache applied and time allowed for scanning/building.

Finally, we have the NVMe SSD test. Although I fully anticipated it to be the best performance, it was more a question of ‘to what extent’, as the are several frictions factors to consider (even after the debate of whether the Synology can leverage the performance possibilities). Once again, the test was reset, the cache applied (removing the old SATA one first) and then brief time allowed for the cache to scan and build.

Once again, these results should be examined as products of this specific test type and environment and may not well indicate performance increases/decreases in your own hardware storage setup. There are jsut too many variables to consider to create one all-encompassing test. So, just in case, your setup is different, these are a few things you should bear in mind when considering this test (or indeed ANY performance test)

When all three tests were done, the times were quite clear (10-12 second margin of error). So, let us compare those results:

The core takeaways at this stage are:

However, the reality of this is a little more complex. For a start, a period of ‘building/burn-in’ is required of the cache. Not only for the Synology NAS system to analyse the storage structure of the HDD Storage Pool, but also the system will see actions that may not initially require caching immediately and therefore the system utilizing hot data on the SSDs is not always immediate. Clearly my test was going to trigger caching quite early on, give it is targeting the same data in multiple instances at once. Although the benefits of even this caching test are only going to be in the smaller files that are copied on the cache and very much less so on the larger files (bigger ISOs and 4K Video files). So for system/app files that are accessed with frequency, the benefits will almost certainly be felt. But the improvements that are made available by letting the cache ‘do it’s thing’ for a while first cannot be understated. Initial testing of the caching on both SATA and NVMe SSD straight after it was built in some cases actually managed to be slower than the HDD n their own – but this was down to the system working to build the cache in tandem with the HDD test – resulting in an overworked CPU and storage pool – so, make sure you give the cache a good period of time (relative to the size and % capacity filled) to do its stuff!

Nevertheless, even in this somewhat rudimentary test, the benefits of the NVMe caching over SATA was apparent. Perhaps not as much as you might hope, given the bold words used in the performance and IOPs speeds of NVMe SSD over SATA that media manufacturers boast of, but that will be alot more dependant on you having a system that is optimized in a way that it can tick all the boxes to hit those NVMe highs. Perhaps a more powerful NAS (Xeon?) a larger RAID array that leverages performance (RAID 10, 50, 60) or hard drives featured in the said array that are high in read/write performance (WD Ultrastar, Seagate Exos, Pro NAS media, etc) that allow data to be exchanged with the NVMe SSD that much faster.

Some of you may be aware that Synology has begun releasing its own range of SSDs for NAS. The SAT5200 SATA drives for flashstation server use and the SNV-3400 and SNV-3500 NVMe media specifically for NAS caching. Find out more below in my review, as well as the specifications of those NVMe SSDs:

From the SNV-3400-400G Review: “Based on hardware and ingenuity alone, I have to give Synology full marks on this. NAS brands are always trying to expand their range towards accessories and ultimately spread into the rest of the network environment(eg memory, NICs, Routers, Switches, etc), but these SSD are an exceptionally mature move from the brand. The Synology NVMe SSD range (3400 and 3500) is a justified move from a brand that knows exactly what it is and does not try to make promises it cannot back up. Right the way back in March when we first learnt about their move into SSD, it was always going to be clear that Synology was making this NVMe SSD for use in their systems for intelligent caching. With an ever-growing focus on the use of intelligent caching in their newer 2020/2021 generation of devices, as well as big improvements in the algorithms used in background caching of DSM 7.0 later this year, Synology are making a bold but understandable move here. The NVMe drive itself seemingly leverages in favour of Read over write, but that is very much the order of the day for users who have maintained increased storage over time, but a decrease on a performance that comes with the holding of data. The range is in its infancy in terms of the capacity portfolio (with a stronger line up apparent in the 2.5″SATA-5200 SATA series) but I can applaud what Synology is doing here. I just hope it does not come at the expense of support of other drives in their prosumer and SMB ranges in terms of compatibility. Overall – I like it!”