It really is a busy season for Synology Rackmount solutions! The first part of the year has always been heavily slanted towards business hardware in the server industry and year on year, this has always been when Synology unveil their rackmount hardware (with the occasional piece of enterprise desktop too). In recent weeks, we saw the release of the RS1221+ and RS1221RP+ (half depth, Ryzen embedded 8-bay rackmount solutions) but since their release, we have registered several other rackmount solutions sudden appear online. Some in a more fully formed fashion and others in nothing but model name. So, along with the RS3621xs+, RS3621RPxs and RS4021xs+ that we uncovered earlier in the month, we also want to touch on the reveal of potentially three new products, the Synology RS2821RP+ 16-Bay Rackstation and the largely unknown SA6500 and FS6600N solutions.

Both the RS2421+/RP+ and RS2821RP+ Rackstation NAS have NOT been officially revealed and information provided below is based on the product series and recent release hardware to make educated guesses. The Synology RS2421+, the 12-Bay solution that is a more traditional full-depth rackmount NAS, that is expandable to 24-Bays with the RX1217 or RX1217RP. There will almost certainly be a redundant PSU version (so, an RS2421RP+) and they will follow the architecture of the RS2418+ and RS2418RP+. The specifications are likely to be remarkably similar in the RS2821RP+ NAS as too – which likely increases to a greater PSU power and in a 3U chassis. Although both devices are mentioned in numerous eastern websites (example here – http://www.veeambakup.cn/news/html/1092.html), details on specifications are still a little vague in most cases. Nevertheless, here is our estimation of the hardware we are likely to see:

Of all of the new product IDs that have appeared online recently, the RS2421+ and RS2821+ and easily the two most likely to be 100% legitimate AND arriving relatively, as the Synology rackstation series begins to embrace the Ryzen V1500B processor and upgrade over the previous Intel Atom C3538 in the 18/19+ series that came before. Much like the RS1221+ released recently, there is every likelihood that there will not be m.2 NVMe SSD bays present, but the support of the E10M20-T1 Combo card instead.

Now, stepping away from things that are looking very real and now towards information that needs to be taken with a HUGE pinch of salt – namely the Synology SA6500 and FS6600N solutions. Originally raised by Synology Community user @Putto online and seems remarkably light on the details. There is, of course, every possibility that this is not anything concrete (typo, troll or more) but it does seemingly have the vibe of something more than that. The original model ID dump message is below: 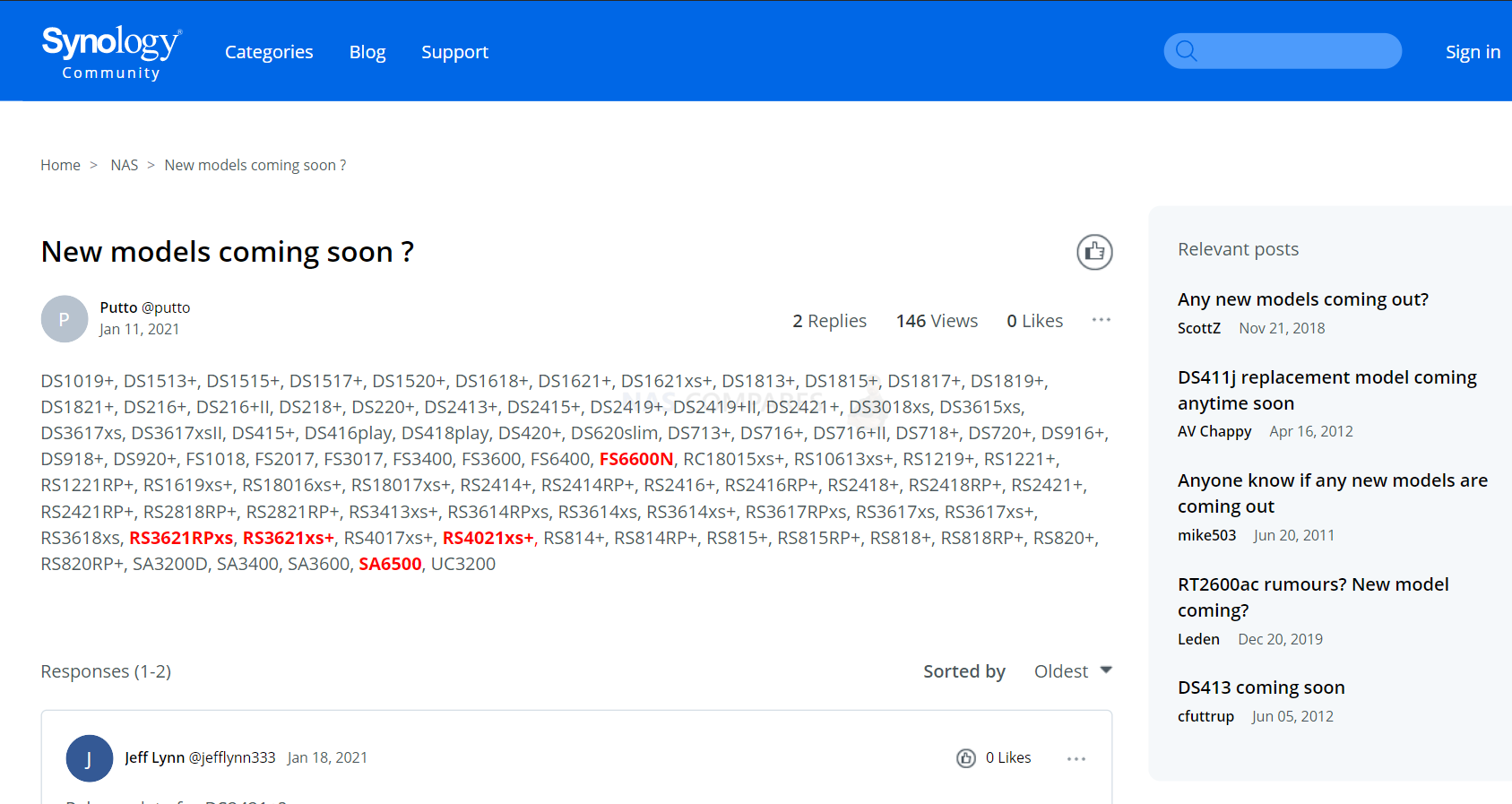 Now, let’s take a good look here. Pretty much all the model IDs we are discussing today are featured here and although there is zero other information available, this is still quite a compelling list of products. These solutions are not the only Synology rackmount models are not the only systems that are as-yet-unreleased and it would be worth considering the Synology HD6400 60-Bay solution that we covered back in 2019 that has since gone quiet. Although it was only a prototype at the Synology Solution exhibitions worldwide, there is always the possibility that it has undergone a model ID change (as seen previously in the UC3200 and DVA3219) and actually present here. Even with a casual glance, we can clearly assume (if legitimate) that the following is true:

However, for the FS6600N FlashStation NAS, if real, that is something very different. Almost certainly following in the footsteps of the FS3400, FS3600 and FS6400 (though, let’s not completely write off the idea of a desktop follow up to the FS1018 in some form), the main unknowns here is the N at the end of the model ID (NVMe? NVR?) and whether this will perhaps finally be a move from Synology to embrace U.2 or U.3 NVMe flash storage. This is all purely speculation at this stage of course, but it is still nevertheless an interesting. Here is a breakdown of what, if indeed real, is likely true about this enclosure:

As mentioned, these model IDs should be viewed as a bit ‘smoke and mirrors’ as this stage and although I think there is every likelihood that we are discussing real solutions here, this should not be used as any form of guidance on the storage solutions in your own business environment right now. In short – TBC!

As previously covered on NASCompares , unfortunately, the full hardware information on these three releases is still unavailable but given the early-ish announcement window we have seen online, I would not be surprised if the data sheets arrived shortly. Until then, we can make some educated guesses on the hardware architecture just based on the RS3621xs+, RS3621RPxs and RS4021xs+predecessors. So, we estimate that:

So, those are the things that we can be confident are either true, or are at least close to the mark. But there are still things we still wonder, such as does each system feature m.2 NVMe SSD cache bays? We will have to wait till the full announcement or if/when data sheets become available. 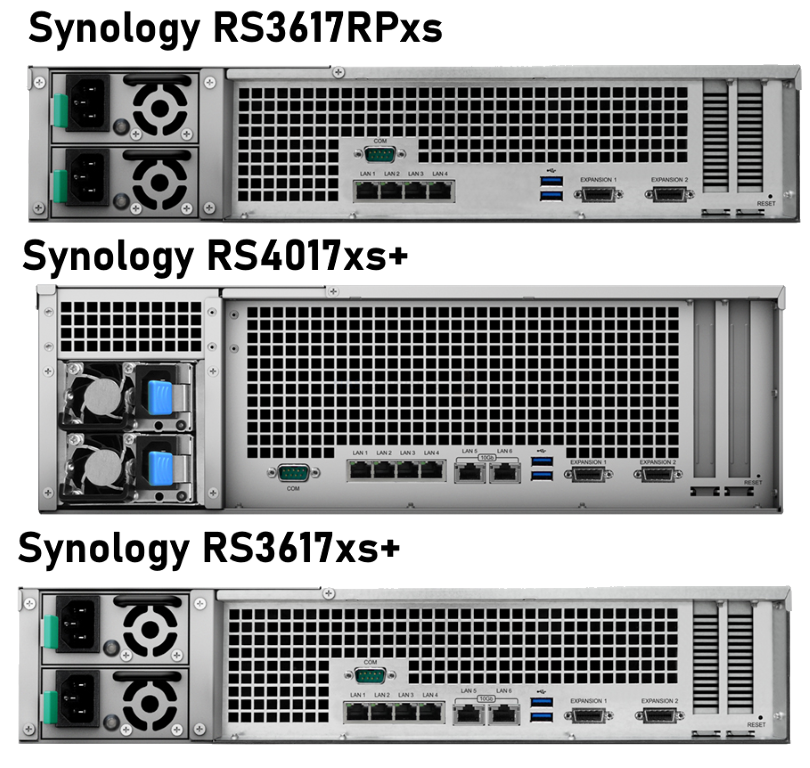 So, until we have more concrete information on these new solutions from Synology, it is probably best to hold off doing anything proactive with your budget, or if you are in a pinch, you can always use my free advice section below to get impartial and ‘real human’ guidance on the right solution for your home or business needs. Alternatively, subscribe to page updates below and get notified when we know more about these products. Stay tuned!