If you have been looking at Synology or a more cost-effective, low-price and highly power-efficient NAS drive in 2022/2023, then there is a very good chance that you have been wondering about the release of the DS223, as the current affordable ‘standard series’ offering of the DS218 has been available now for well over FOUR YEARS! Well, I am pleased to share that I have been informed that Synology has plans to release the newest entry into their standard class tier with this new 2-Bay NAS in the last quarter of 2022 (or possibly the start of 2023). This little snippet of information (alongside mention of other new desktop NAS’, such as the DS223j, DS223+, DS723+ and DS923+), details which units are going to form the bulk of the brand’s home-prosumer-SMB diskstation portfolio. The DS2xx and DS4xx series has always been highly desirable as the entry point for most first-time Synology NAS small business users and although is a solution that arrives with hardware that could arguably be called ‘economical’, it is worth also remembering that it will almost certainly arrive with support of DSM 7 – so you are going to be looking at an affordably jumping off point into a complete hardware+software solution. Although the details we have on the DS223 are incredibly thin on the ground at the time of writing, this information DOES come from a very trustworthy source that I am sorry to say I cannot share. I am sure this will result in many having doubts about the reliability of this information (I would feel the same), but you are just going to have to trust me on this and/or wait out the rest of 2022 as this all plays out. Let’s discuss the DS223 a little further.

A very, very small update on the Synology DS223 and DS423 with information on the three appearings (very briefly) on an official Synology site (the Japan official page, via the Knowledge center) that appeared in Google. Unfortunately, the listed page does not lead to any direct information (possibly as pages/listing or these new NAS are being drafted and lined up for additions to the official Synology NAS support directories – in ‘hidden’ forms. Even via Google Cache and WayBackMachine, no further information is publically accessible on these pages. However, the found model IS text is still shown on the Google search results (see below) and largely indicates that the new NAS for the Diskstation 2023 will be arriving in Q4 2022.

Note – I have made an absolutely tiny ‘update’ to this update, as the search results that show these new NAS’ has now appeared in more languages/locations on their site: 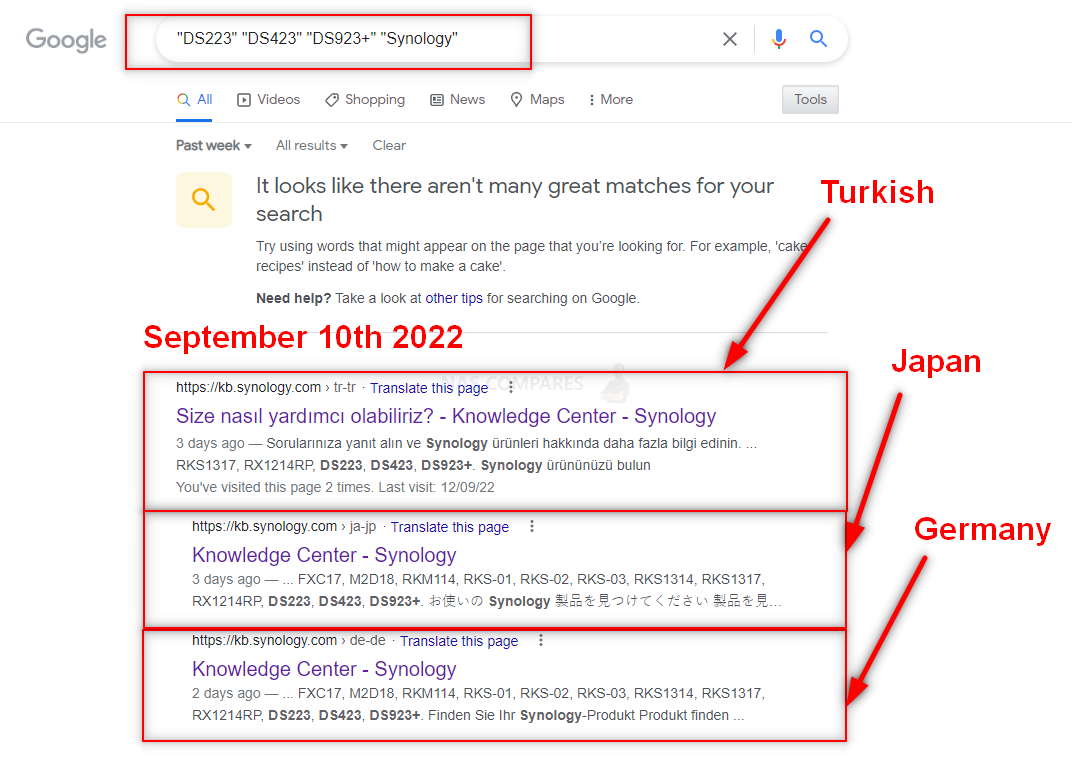 This a small but very pertinent update to the potential CPU that will be in the Synology Value series. Alongside ongoing rumours that the first wave of DSx23 series diskstation NAS will arrive in October, a new CPU entry has appeared online with DSM 7.1 support of late 2020 released Realtek RTD1619 ARMv8-A processor. The architecture of which is incredibly likely to be for the DS223j, DS223 and DS423: Now, the interesting thing about this CPU is that 6 core architecture and increased 4K support over that of the RTD1296 that came before it (though a marginal drop in clock speed, this is more than made up for in efficiency). The ethernet/network speed still appears to cap at 1GbE, but even though 2.5GbE continues to grow in the market, I think very few people (myself included) would have though Synology would include a 2.5G network connection in their value tier. Here is how the RTD1619 and RTD1296 CPU Compare:

What Do We Know About the Synology DS223 NAS Drive?

Unfortunately, we still have very few concrete ideas on many of the details of the DS223 NAS. Alongside the DS223, I have been informed that the Synology DS923+ Expandable and Fully Featured 4-Bay and FOUR new revisions of the Diskstation 2-Bay are in the works. The 2 Bay systems are the Synology DS723+ Expandable Premium NAS, a DS223+ mid-range fully software featured 2-Bay, a DS223j cost effective series NAS and, finally, the DS223 cost-effective 2-Bay system. No details on the hardware have been provided, but these will almost certainly follow in the footsteps of previously released Diskstation 2/4-Bay Devices in this hardware tier, such as the DS418, DS118 and DS218play. Unfortunately, I cannot disclose the source of this information. This is as much information as I can share right now, other than a rather wide release window (see at the bottom of the article), that is about it. Now, I can already hear the complaints in the comments about this, but you are going to have to trust me on this one, as I trust the source and in 6 months all this will play out. Additionally, I received further information on other planned Synology hardware accessories/add-ons that I need to verify in the meantime before I publish. So, let’s discuss what we think the hardware of the DS223 and other Diskstations are likely to be.

What Do We Expect the Hardware of the Synology DS223 NAS to Be?

As mentioned, the DS223 information I have received also highlights a range of other NAS devices arriving in that same 6 months time frame. The DS2xx/DS4xx NAS has always formed one of the lowest hardware/price points of the RAID-enabled systems in the brand’s portfolio (with the lowest available tier being the DS2xxj and DS4xxj systems) and the need for the system to run DSM 7 comfortably (even at this more home-user-focused system) will result in the brand giving this NAS a modest, yet still capable day one hardware. I will say that at the time of writing, I have ZERO idea on the CPU+Memory of the DS223, but with well over a decade of this brand’s approach to these systems, we can make some educated guesses based on the brand’s hardware choices in previous years AND the state of NAS hardware/components that are favoured by the industry in 2022/2023 already. The DS223 will almost certainly not arrive with an x86 processor, instead arriving with an ARM processor (likely ARM v8). So, for the DS223 NAS CPU, I think it will be one of two options (and again, this is an educated guess):

Additionally, Synology has had a habit in the last few years of using similar/identical CPU choices in both the standard class DSXXX and DSXXXj series and with a J and standard class 2-bay highlighted in the information I was given, I am included to think this will happen again, with differentiations between J and standard coming down to quantities of memory and ports/connections available in the default model. Both of these processors are ARM architecture, i.e. they are very power efficient for 24×7 use. Alongside these, I can imagine that the DS223 will arrive with 2GB of fixed/non-upgradeable memory in line with previous DS2xx releases to ensure that DSM 7 runs as smoothly as it can with its base-level functions (i.e before you install further applications in the app center). The DS220j that was released back in 2018/19 + DSM 6.1 was able to run, even with its modest Realtek RTD1296 CPU and 2GB of memory, and even ran DSM 7 (with high CPU/Memory utilization admittedly – as shown in the video below), but I think the DS223 will need 1GB of DDR4 if it plans to run DSM 7 smoothly in years to come.

Aside from that, I do not think we will see much else changed on this. The System will certainly be 1GbE and feature one or more USB 3.2 Gen 1 ports. As well as almost certainly arriving in the familiar Synology black plastic chassis of previous generations. One question people might have is HDD compatibility and I cannot see the brand being heavy-handed on this very affordable end of the portfolio, however, do not rule this out (in even a small way) if Synology reveal a more mid-range/affordable HDD series alongside their enterprise HAT5300s.

When Will We See the Synology DS223 NAS Released?

We understand that the DS223 and other DSx23 Diskstation systems are arriving towards the end of the year and start of 2023 – Almost certainly in smaller release groups and with further details on them being revealed at the Synology 2023 Event (that last bit IS speculative, but almost certainly the case). We will update this page regularly with more information on the DS223 NAS as it arrives, so if you want to be the first to know, you can get alerts on this SPECIFIC page by entering your email address below.