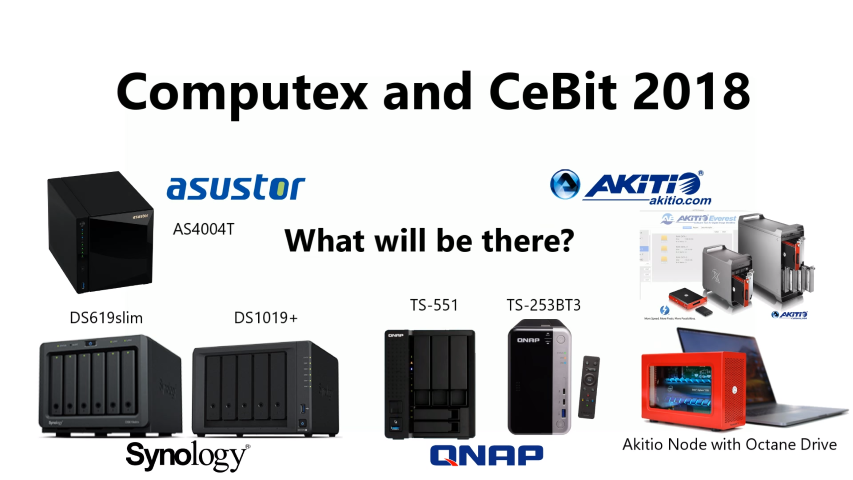 What to Expect from Synology, QNAP,  Asustor and more at Computex and CeBit 2018

It is fast approaching that time of year when the NAS industry (and indeed the whole technology industry as a whole) start getting excited about two of the biggest IT release events of the year. Over the last few years, Computex in Taiwan and Cebit in Germany has been especially big for data storage as a whole and with previews, leaks and teasers being made by the big brands, 2018 promises to be the best yet. Here on NASCompares, we like to focus on Network Attached Storage, as well as DAS and Thunderbolt and will be covering both events to give you the latest news on NAS In 2018/19. With some really groundbreaking tech planned on being shown at Computex 2018 June 5-9th and CeBit 2018 11th-15th, we wanted to take a look at the key NAS and DAS brands to see what they are going to show and what we hope they include.

Synology NAS at Computex and Cebit 2018

As already discussed in the last week or so (see link below), technically Synology is not attending CeBit or Computex 2018 this year and are instead hosting an event parallel at the same time as both. Whether this is to ensure that their audience is more NAS focused, or because they do not want to be overshadowed by bigger, more broader IT brands outside of NAS. Never the less, we can confirm that at the private events we will see the Synology DS1019+ 5-Bay NAS, the 8-Bay RS1219+ Rackmount, the DS2419+ 12-Bay Diskstation, the ultra-powerful elite XS series RS1619+ 4-Bay rackstation, the Synology Mesh MR2200ac router and finally the compact SSD form factor DS619slim. To learn about this confirmed Synology NAS at Taiwan and Hannover this June, visit the page below:

Besides those hot new releases, we also want to speculate a little about units we hope to see. Events at or around Computex over the years have produced several key Synology NAS releases and we expect the Synology Solution Exhibition in Taiwan to be no different. Much like last year, we think we will see the arrival of a new cost-effective/value series NAS in the form of a DS219se, DS119J or DS419J perhaps, nothing too groundbreaking as current Desktop 18’ series, for the most part, was released in Sept/Oct of 2018 and it would be madness to uncover anything that would damage existing IP. on sale.

Finally, we will DEFINITELY see the Synology MR2200ac mesh router. It has been mentioned and featured at several events in the last 12 months but still has not been given an official release date (much like the M2D18 NVMe PCIe card or the SG1000 , which might be dead and buried. We shall see!

QNAP NAS at Cebit and Computex 2018

Somewhat differently than their competitor, QNAP have announced and revealed the bulk of their new releases have already been revealed in the last 2 months (TVS-951X, TS-551, etc, see link below), but we stumbled across some part numbers by accident a few months back (TS-682, TS-1282, etc) so these may well lead to non-HDMI enabled versions of their 2017/18 counterparts, the TVS-x82 series.. QNAP will no doubt have their new 10Gbe units on show that we have already covered, such as the TS-832X and TVS-951.

As for what will be new for the 2nd half of 2018, I think we will see more evolution in the world of 10Gbe. Prices of 10Gbe storage and the components in between have been coming down in price all the time and QNAP have been spending the first half of the year adding to this with their popular QSW-1208-8C 10Gbe switch and QXG-10G1T 10Gbe PCIe card. I think we will see this network functionality be extended into the home user market, It would be VERY surprising if we do not see mention of a new Thunderbolt NAS, as with their dominance in this area a reveal at computex or cebit is pretty much guaranteed! That said, it is anyone’s guess which direction this will take and though I think the whole area of TB NAS is interesting, nothing would be as popular as a [potential 2-Bay Thunderbolt NAS 2-Bay, such as a TS-253BT3.

Outside of thunderbolt, i think we will see more active participation in NVMe enabled NAS before the end of 2018, not just QM2 cards. Maybe even a reboot of the TBS-453A or a HS-451+ with NVMe SSD support. Though you would need 10Gbe to really see the advantages. Finally, following the announcement of the TS-551 3-Bay Intel and HDMI enabled NAS, we may see this logic ported over to other popular series, such as a TS-553 or TS-573 for a new series of SMB NAS featuring the popular media functionality of HDMI, remote controls and audio in/out – but also with dedicated SSD cache slots. Oh…and  theTGX-150 is definitely not happening.

Asustor NAS at Computex and Cebit 2018

Asustor NAS Servers are something we touch on from time to time here on NASCompares. As a NAS brand, they release even fewer units a year than Synology (but more than Drobo… I think Drobo NAS are released at roughly one each ice age). Asustor have been pretty clear about their plans for the 2nd half of 2018. At Computex 2018 that plan on no surprises!

They have announced a new 2 and 4 bay NAS, declaring them the industry’s first 10GbE entry-level NAS. The AS40 Series, 2-Bay and 4-Bay AS4002T and AS4004T, arrive with a Marvell Armada Cortex-A72 CPU, 2GB of DDR4-2400 memory and both arrive with 1x 10GbE 10GBASE-T. They feature a new chassis that supports hot swappable bays and a front cover. Ports also include 2x USB 3.0 and 2x LAN. Along side this, Asustor has reported that they plan on updating existing product lines to V2 such as the AS10 v2, AS31 v2, and AS32 v2 series. This also arrives with the New ADM Version 3.2 newly updated and better than it has looked in ages and I can honestly say it’s an impressive piece of software now.

Thecus NAS at Computex and Cebit 2018

Genuinely stumped. They have been really quiet and aside from maybe an update to older stuff, or jumping on the 10Gbe bandwagon, I think they may be disappearing soon. Sorry to be the one to say it, but though they were one of the earliest companies in the field of NAS, as well as a popular WSS (windows storage server) NAS range. We are really seeing little from this brand and they will not be at these events.

Thunderbolt Technology at Computex and Cebit 2018

We have already seen some massive jumps in Thundebrolt 3 technology, especially in ePCIe with the Akitio Node Pro and Node Lite. We will see the Akitio Node Lite with Intel Optane Drive preinstalled (R/W in excess of 2000MB/s)

DISCUSS with others your opinion about this subject.
ASK questions to NAS community
SHARE more details what you have found on this subject
CONTRIBUTE with your own article or review
IMPROVE this niche ecosystem, let us know what to change/fix on this site