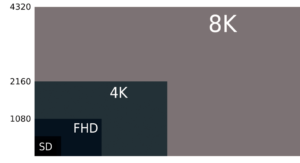 Transcoding on a NAS such as the DS1019+ device is the ability for a multimedia file to be changed from it’s existing format or codec to one that is better suited to the destination device. In this file access, the DS1019+ NAS is the host device and the device you want to play the file is the client. This is the case of whether you are using Plex or not. Transcoding is typically required when a media file is more recently released than the client device that is accessing it, so the newer compression or playback format is unknown to the device you want to access it with. Alternatively, you want to access the movie or music on your DS1019+ and do not want to use the original file in its full size. Transcoding can enable you to stream a much smaller version in weight or resolution if needed. IN a popular program such as PLEX, smooth playback is essential, and with the plex media server application on the DS1019+ NAS using a larger percentage of CPU and Memory than most programs, it is very useful to know the plex transcoding abilities of any NAS.

When you install a Plex Media Server on your DS1019+, you should know that plex is not the answer to all of your media prayers. It has some limitations and depending on the NAS you use, these limits can be annoying. You will most likely have media files in a large collection of different formats and there is no guaranteeing that these are going to be compatible with TVs, iPads and Smartphones that you wish to watch them on. Although you will have a version of the Plex app on the viewing device, that app will still be locked to playback the supported media types on that device.

So if your phone does not support.MKV or .MOV, then neither does the plex app you installed on it. However, this is where transcoding comes in again, as the plex media server will use the NAS system resources to change the file to a version/format that it CAN play. What makes transcoding with Plex different to ordinary transcoding is that often, the NAS (in this case, the DS1019+) will not let the plex use the transcoding engine inside. This is not the end of the world, as it will use raw system power instead. The result is that where a regular transcode outside of plex will use 20-30%, in plex it could go as high as 70-80%. This is why it is important to know how well a plex NAS will transcode, as if it will hapen regularly, it could potentially slow down the general use of your DS1019+ NAS.

Destination devices range greatly and are often referred to as the client device. Common client devices that your DS1019+ device will be accessed by are often: 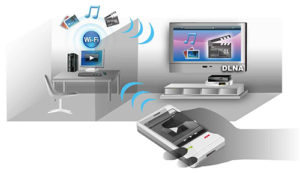 Transcoding between a DS1019+ and your media can be of tremendous benefit for those with limited internet bandwidth, download limits or low powered devices whilst using the plex client application.

What are the Specifications of the DS1019+ NAS?

The specifications for the DS1019+ NAS are below and like all NAS devices, the CPU and Memory play a big part in how well it performs at transcoding both in and out of plex. The key factors to consider are if the device features an x86 or ARM-based CPU, does the DS1019+ CPU feature a transcoding engine and how much RAM the device arrives with for multiple transcoding tasks. Below are the DS1019+ specs: 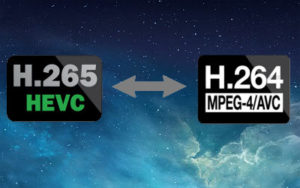 H265 is the newer and more consumer-friendly alternative to H264. It is also known as HEVC (High-Efficiency Video Coding) and was developed in order resolve issues of enormous 4K media files being just too large for your client device to playback. H.265 has become so popular and data saving that chances are that the YouTube clip, iTunes media or iPlayer content you watched was in .265 and HEVC. Typically a modern NAS such as the DS1019+ will playback with JUST H.265 or it will PLayback both H.264 and H.265. The latter pretty much being exclusive to x86 or AMD based NAS CPU devices. 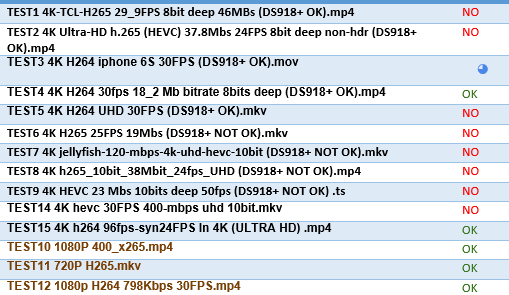 In an effort to maintain fairness, we also covered an H.265 1080p file, so a comparison between this and Test 12 could be made. Ignore the test numerical order numbers, as this needed to be re-done (blame the DS1019+ needing a firmware update mid transcode and therefore spoiled the results the first time). This was an HEVC/H265 8-bit file running at 24fps through the plex media server application, but with a comparatively low bitrate of just 405kbps. The results (correct this time) were again, fairly expected: 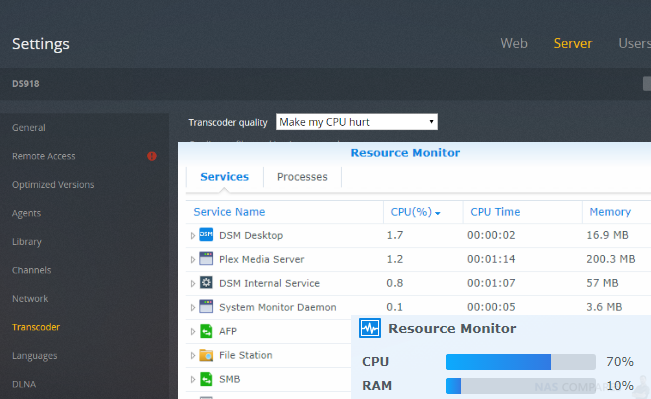 Next, we pushed the DS1019+ NAS to transcode a 4K H264 this time, the media file was an 8-bit recording, but this time back at 30 frames per second and featured a bitrate of 51 megabits per second, our highest yet. The DS1019+ playback through the plex media server application results were: 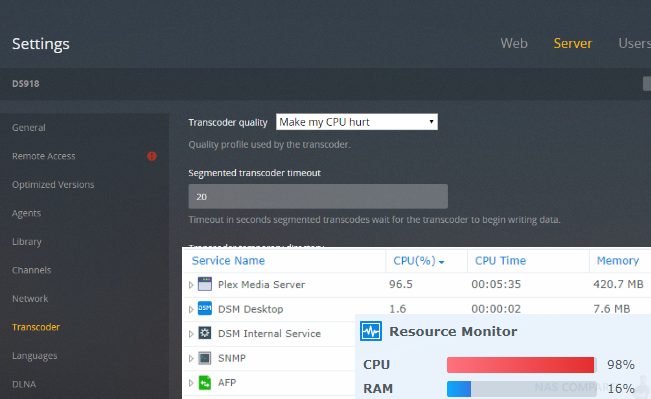 In an effort to fully test the spectrum of the DS1019+ NAS and it’s transcoding, we wanted to also test HD Playback (to give the 4K results a sense of perspective). First up was 720p. This 720 HD file through the plex media server application was another efficient H.265 8-bit file. It ran at 24fps and was just 1Mb in bitrate. The DS1019+ NAS performed as expected (given the earlier results): 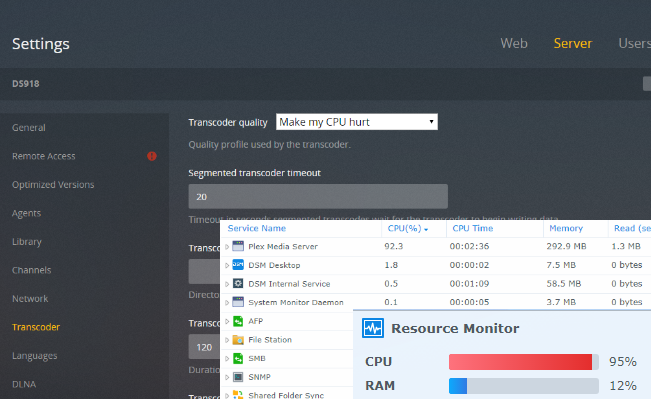 Next up we gave 1080p transcoding a try on the DS1019+ NAS. This AVC file (so H264 again) an 8-bit file running at a fluid 30fps. However, with a lower bitrate of just 0.8Mb, it should not have pushed the DS1019+ as much as earlier tests even through the plex media server application. The results for 1080 HD transcoding were: 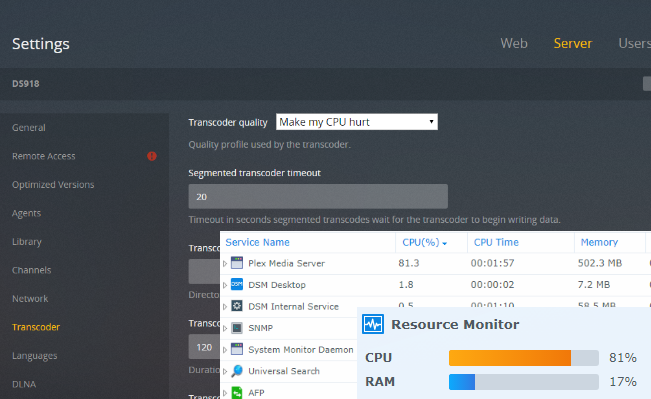 We then decided to end on an older and currently more common owned 4K type of media file. This was kind of our control tests for most NAS and was no exception for the DS1019+ through the plex media server application. This UHD file in 4K was an 8-Bit file, arriving in 24 frames per second and at a bitrate of 22megabits per second. For those who have owned 4k media for a while and want to consider their older H264 material, this test would be of interest. The results were. 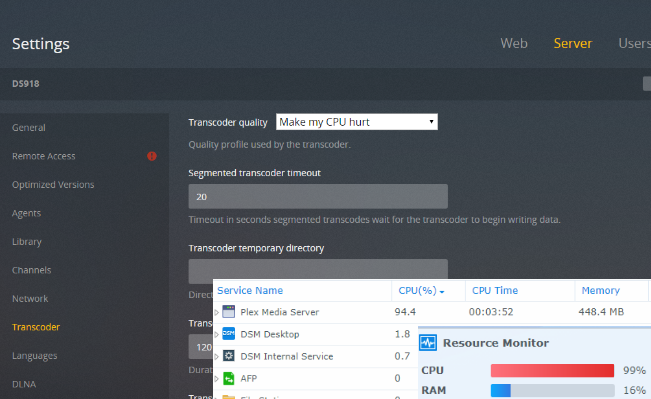 I hope these Plex Media Server 4K results were of use to you and this helps you consider which NAS you wish to you buy in 2018, whether it is the DS1019+ or something more or less suited to your needs.