Well, we had to wait a while didn’t we, but finally, we can confirm that the brand new official Synology 10Gbe and m.2 NVMe SSD upgrade card is released. I say ‘released’, the Synology E10M20-T1 has been officially launched, which generally means that stock at your local eShop will be landing imminently, but as this is a card that we talked about for the first time in May 2020, most users will be happy just to know that it is REAL and that they can buy it. Synology has been a company that until recent years was more heavily acclaimed by it’s DSM software than it’s hardware. Something that has changed a great deal in the 18, 19 and 20 series generations was the ways in which the company has embarrassed SSD caching in their NAS devices (going as far as to start releasing their own SSD), including NVMe SSD caching in a number of their newer generation devices. Alongside this, though the company has had a reputation for keeping 10Gbe at arms length in the bulk of their range, they have embraced PCIe upgrades in a large number of their devices over the years, typically always arriving in PCIe Gen 3 – opening the door to excellent bandwidth potential for upgrades. Till now the classic dilemma for a Synology user looking to upgrade their PCIe equipped NAS was to choose NVMe SSD caching for improved internal speeds, or a 10Gbe card for upgrading the external speeds. Supplying multiple cards in each category, many users were still not satisfied with the idea of choosing between them. Fast forward to now and we find the Synology E10M20-T1 10Gbe and NVMe SSD combination card that features BOTH of these services, whilst still only occupying a single PCIe slot. So, let’s talk about this new way to upgrade PCIe enabled NAS Diskstation and Rackstation NAS, why you should care about this card and, most importantly, why this is such a big deal. 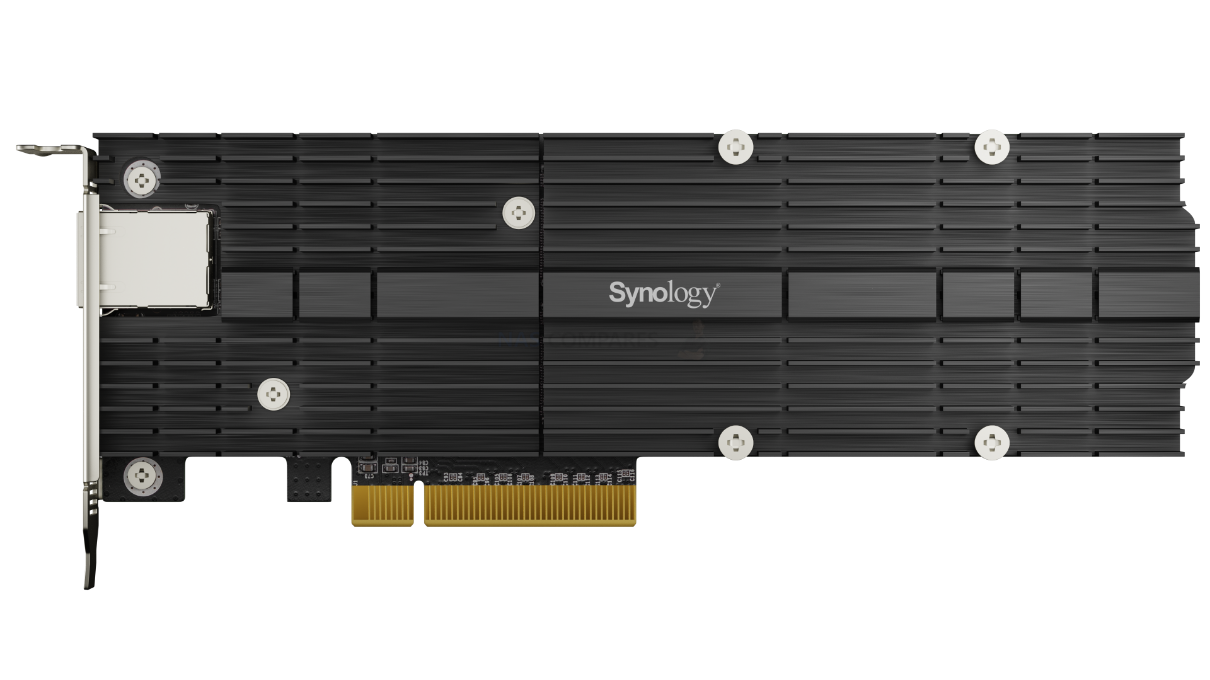 Read our reviews of the other new-generation Synology NAS Drive

As mentioned, the Synology E10M20-T1 is not the first PCIe upgrade card that Synology have produced for their existing NAS users base. There have been multiple 10Gbe upgrade cards in their range, supporting SFP+ (fiber) and RJ45 (copper) across one and two-port cards. Likewise, we have seen multiple NVMe upgrade cards released over the years, with the latest being the M2D20 (featuring 22110 length NVMe SSDs too). The Synology E10M20 seemingly brings a huge degree of the hardware available in both of these categories and combines them into this one super card. It is not quite perfect (single network port and only available in 10GBASE-T) but the bulk of users who have been seeking this kind of upgrade will appreciate that if you take things too far in the hardware department, you will eventually create a bottleneck over the PCIe connection. Below is all the hardware information:

So, as you might expect, it is not quite as exhaustive as the hardware you might expect on a NAS drive, but it is worth highlighting that this is a self-contained network and caching upgrade, so the NAS CPU will need to handle the files/caching that is required by the storage pool/volume, but this card brings both the connections AND the controller components to make them usable by your NAS. That said, the power of your NAS, the performance of your storage media and the network environment of your other devices will always play their part in just how much the E10M20-T1 can help improve your throughput and IOPS. 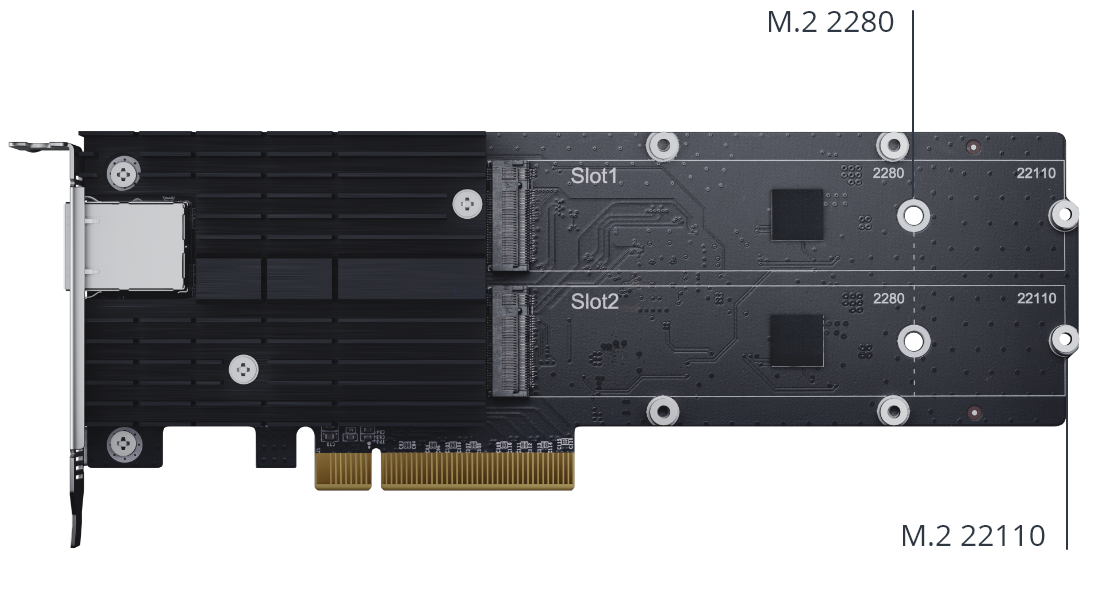 It may seem a bit obvious, but upgrading your system with faster connections will make things faster. Good, you read that? Good – now take the sentence and throw it away. The truth is considerably more complex than that really. The overall performance of your NAS drive is made up of (typically) the following 5 factors:

So, taking these factors into consideration, how does the Synology E10M20 card help? Taking into consideration that you will NEED a NAS that has a PCIe slot of at least PCIe Gen 3 to take advantage of this card, it helps in the following ways

So, as you can see, for a relatively small upgrade, the E10M20 brings ALOT to the table. Sure, you WILL need to supply your own SSDs, a 10Gbe network environment (cards, switch, etc) and own a NAS with a PCIe Gen 3 slot and above, but given the fact that now almost half the Synology 2019/2020 series have PCIe slots, NVMe SSDs are becoming much more affordable and 10Gbe switches and cards can be purchased for between 100-200 (some bundles for 199 are out there), it is certainly an interesting move from Synology and one that many argue is long overdue! 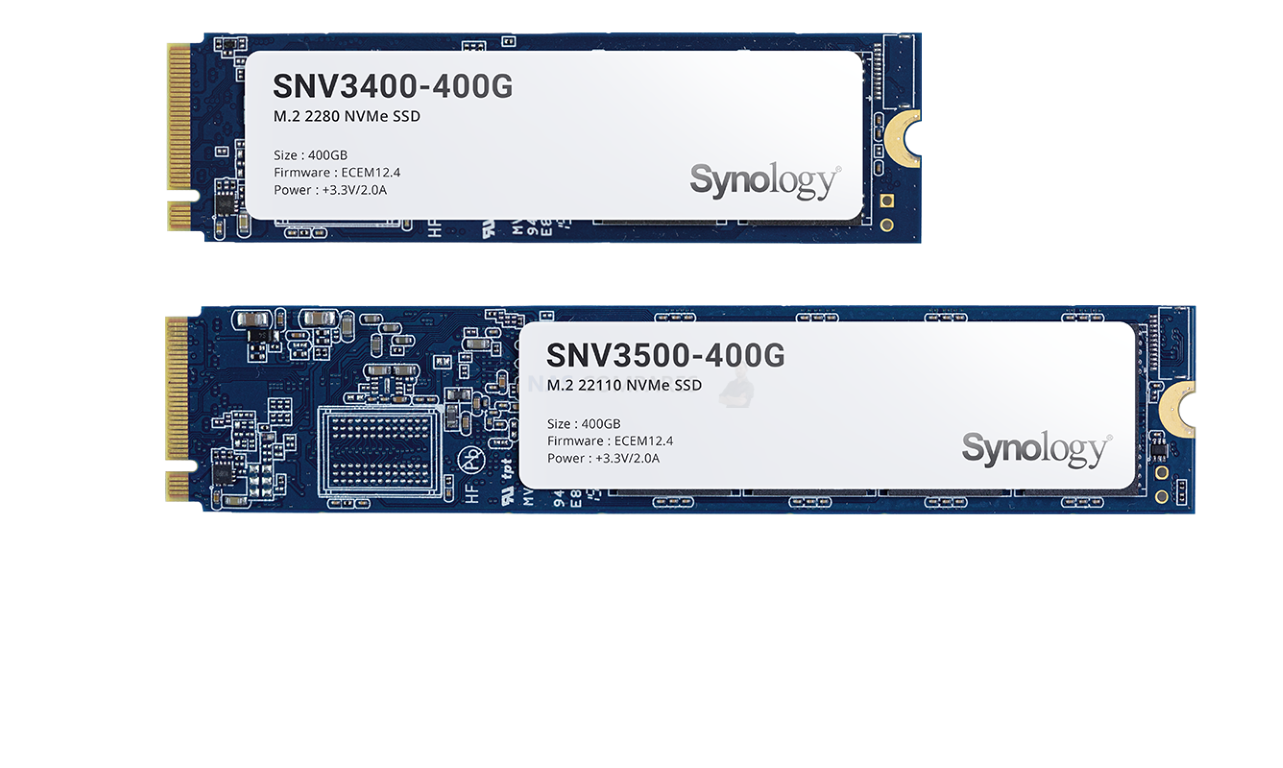 Which Synology NAS and SSD are Compatible with the E10M20 PCIe Card?

The full extent of support for the Synology E10M20-T1 is still being explored. Previous generations of the Synology NVMe upgrade card (M2D18 for example) provided a differing degree of support on certain Synology NAS devices with PCIe slots. NVMe SSD compatibility on the card itself should be pretty clear cut (even the longer 22110 m.2 key drives) and the PCIe gen supported by the NAS (largely dictated by the CPU) is a factor too – the E10M20 is a PCIe Gen 3 x8 Card, as you need a large degree of bandwidth to ensure BTOH the full 1000MB/s and 3000MB/s+ of the names can be realised. Below are some of the devices that support NVMe SSD – We will update this list as we learn more:

If you are thinking of buying a E10M20-T1, please use the links below